Share All sharing options for: Bevo's Daily Round Up 3.20.09

Rick Barnes is playing in his home state, but the last time he was at the Greensboro Coliseum, things didn't go so well.

In Barnes' last trip here for a game, North Carolina and Dean Smith were putting the finishing touches on a 78-62 quarterfinal win over Barnes' Clemson Tigers in a quarterfinal of the ACC tournament. That's when things got interesting.

In the game's waning minutes, UNC's Jerry Stackhouse drove to the basket and was fouled by Iker Iturbe.

Smith jumped off the bench, pointing and yelling at Iturbe and didn't let up. Eventually, Barnes called a timeout and began yelling at Smith. The two got into a face-to-face argument and had to be separated by referees.

The Houston Chronicle has a gallery of retired numbers at Texas. 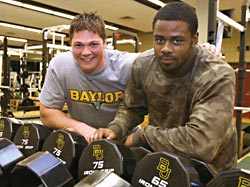 During Baylor’s spring break, offensive tackle Danny Watkins went back home to British Columbia to work at the fire station.

Though Watkins has played college football for the last two years, he still enjoys the camaraderie of his fellow firefighters in Kelowna, B.C., where he has served for seven years. But the big Canadian got a little more than he bargained for last week.

"We got a brand new ladder truck," Watkins said. "One day I was up on the ladder 140 feet in the air, and the wind chill was about 15 degrees below zero. When you start blowing water with the fire hose, you really feel like you’re freezing. We had a couple of fires, and it was a long week. I couldn’t wait to get back here and get into pads."

His team earned respect in 2008 by exceeding expectations all season long.

Baylor coach Art Briles said that first season is only a start of the growth he expects in his program.

"We had our expectations going in to earn respect and credibility. And we did that, a good job of it," Briles said. "Now, we have to step it up a notch."

Pete Flutak, writing for College Football News, has some coaches that need to win this year and says that Dan Hawkins needs his mojo back.

Fences make good neighbors. Bob Stoops has had another thing on his mind besides football.

Whoop. The Aggies made it out of Round One of the NCAA tournament.

Harrell and McCoy, but not the ones you are probably thinking about. Clark Harrell  and Chance McCoy at Abilene Christian University. More roommate saga.