Share All sharing options for: Bevo's Daily Round Up 3.03.09

A main reason is that big-time NCAA football is not education; it is big business. Ed Goble, associate athletic director for business, makes clear that, “in most general terms, 75 to 80 percent of [sports] revenues are tied to our football program.” A major question to ask is: Who benefits most from the business that Texas Monthly calls Longhorns Inc.?

The answer is obvious. Our head football coach makes $3 million a year. His already- anointed successor, an assistant coach, makes $900,000 per year. The men’s athletics director makes $455,000. Head coaches in other sports top $1 million, and assistant coaches have salaries far in excess of average full professors’ salaries. By contrast, UT’s president makes $600,000 per year and the average faculty member makes $92,000.

The 2010 football class count is up to 19 and climbing. (The Aggies shouldn't worry. They now have three recruits.) 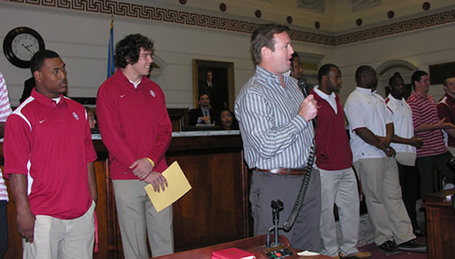 Oklahoma tax dollars at work this time. The OU football team was honored in the Oklahoma Legislature.

A Senate resolution declared Monday as Sam Bradford Day in Oklahoma and another resolution heralded the accomplishments of the team in winning a third straight Big 12 Conference championship and competing in the Bowl Championship Series title game.

"You dig a little deeper, and he’s a scratch golfer, he’s a basketball player and he’s a four-sport athlete, and you like those guys, especially at the quarterback position," Long said. "But I think the scratch golf, when we found that out, I learned from a professional coach that if you have a quarterback who’s a scratch golfer, he’s a good one, because he’s a strategist, he can think, he can get out of the rough and he’s thinking, ‘What’s the next shot?’"

OU's offensive line was one of the strengths of the 2008 team. The Sooners lost four starters and tthis year's line may decide how well the offense fares.

On a team that returns a Heisman quarterback, the entire backfield, two high-quality receiving targets and nine starters on defense, the offensive line could be the determining factor in whether OU can contend for a national title again next season.

Blake Griffin had a tough return against Texas Tech.

What a head-banging return from the concussion by Oklahoma’s star center.

Griffin was less than a minute into his 20-point, 19-rebound performance in Saturday’s game at Texas Tech before leaving the game with yet another bloody nose after being knocked to the floor on an alley-oop attempt.

Last year, Baylor had a lot of questions surrounding spring practice. This year is very different.

When Art Briles opens his second spring training today, far less questions will have to be answered. Freshman all-America Robert Griffin is established at quarterback, and eight starters return on each side of the ball. That doesn’t mean there won’t be competition for jobs. But many of the month-long drills will center on improving and polishing schemes that are already in place.

Big 12 Hardball has the weekly wrap-up.

We continue to keep OU receiver Corey Wilson in our thoughts and prayers.