Share All sharing options for: Texas Baseball 2009: Is She The One?

In honor of the first great start for Texas baseball since 2005, we've decided to go a bit avant-garde with this one. Of course, the 2005 squad won its first 20 games. We're not sure what we'll do if the '09 team gets to that point...

Here we are, two weekends into the college baseball season and Texas fans are experiencing a familiar feeling that they haven't felt for a while: optimism. When you sauntered up to the 2006 and 2007 teams at the bar, the flaws were easily apparent. 2008 looked fine during the first date, but then her obnoxious laugh and inability to field grounders caught up with her.

But 2009 looks good through the first few dates -- marriage good. She reminds you of previous loves, and you're excited about a future with her. The big question remains though: is she really the one that will win Texas another championship (or at least make a nice Omaha run)? Or will this one fizzle out like all of your recent relationships?

This baseball team has to have zits--every team does--but once they're discovered will you look at her the same as you do right now? The offense hasn't always been stellar, having twice been held to just one run. There have been a number of times where the Horns have failed to bring runners home when the bases were loaded and there was nobody out. David Hernandez had four errors...against Texas State.

But aren't these concerns petty? Surely this is more than just a rebound team following three straight seasons of bad relationships with Texas baseball, right? All of the things that went wrong with the last girl-- she couldn't field, she couldn't pitch, she didn't have a go-to closer -- seem different this time around. Even though she is sometimes flaky in making plans to get together, she always comes through in the end. (That's an attempt at a metaphor for the Texas State and UTA comebacks. Do you buy it?)

This weekend we're taking the new baseball team to meet the parents. Stanford has struggled of late, entering the week at 2-6 after being swept by Cal State Fullerton with a bookend two game sweep at the hands of St Mary's. Their second game with St. Mary's that was scheduled for Tuesday was pushed back to yesterday, meaning they'll be playing four straight days of baseball through the weekend.

The Tree has struggled to hit the ball (.236 team BA---.314 for UT), and they've struggled with pitching (6.49 ERA---1.24 for UT), so on paper Texas should be heavilly favored. But this is one of the best baseball programs in the country, it's in Palo Alto where the Horns have won just two of six games in the last two visits, and Stanford has faced far stiffer competition than Texas has to this point of the season.

The last time Texas was marriage-worthy she swept Stanford, but that was in Austin and taking just one game (as the Longhorns did in 2004 when she was about as marriage-worthy as they come) would be fine by us.

*Helpful, right? Our guess is it'll be Green or Workman Saturday and the other on Sunday with Jungmann in the pen. 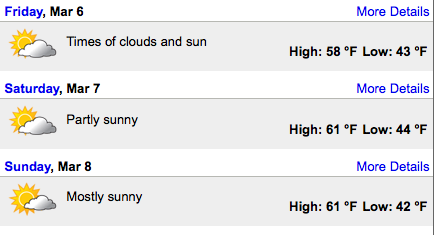