...with Texas safely off any bubble watch, it appears Monday's victory over Baylor remains the Longhorns' final home game of the season. With their beatdown of the Bears, the Longhorns quietly polished off another stellar home season. While many fans remain fixated on the the late-season slide to mediocrity, the home season provided a handful good games culminating with a potentially season-saving victory over #1-in-waiting Oklahoma.

While the complete narrative for this season still remains to be seen, I wanted to take a look back at this year's home schedule. Despite compiling a 13-2 home record, the Longhorns were plagued by some listless crowds and lackluster first-half performances. However, these were partially offset by some incredible second half scoring bursts and some transcendent events for the program.

After the jump, we rank the 15 home games and provide scattershot memories/anecdotes/etc from each game...

As an initial disclaimer, I only made 12 of the 15 home games. As explained below, I missed two games due to law school finals and one game due to a stomach virus.

Here is an actual conversation from this game, which was one of two UT basketball games that my girlfriend (current UVA law student) attended.

Her: Why do they have all these empty seats upstairs? Do they ever fill up?

Me: Well, they usually do after football season. Besides, the Fiesta Bowl is in a few days and everyone is still talking about the BCS. The crowd is usually better than this.

Her: You told me the exact same thing when I came to the Baylor football game.

Yes, she was referencing this Baylor game...

All you need to know about this game is that studying for my law school exams was honestly more interesting than watching on TV while Texas sleepwalked against this truly horrific basketball team.

This was one of the other games I missed this season. The most prescient fact about this game is that it took ten minutes and two phone calls to remember if I went to the game or not.

Can anyone believe we were still ranked #7 in the country heading into this tilt with the Cyclones? As it followed the loss to Arkansas and predated the woodshed beating in Norman, this was the last game Texas was ranked in the Top-10.

In this game, Dexter/Gary/Damion scored 48 of our 75 points. Pretty much the least memorable conference game of the season...

I debated putting this higher on the list, as it highlighted several initial storylines for the season. In a post raising additional issues from the game outside of Wiggo's review, I brought up the offensive dichotomy with/without Pittman, elaborated on AJ's failures as a PG, and expressed the desire to see Balbay run the offense.

The biggest shock from this game is remembering that Alexis Wangmene actually played in a home game this season...

The initial game against Stetson further whet my appetite to see Balbay in action. Wiggo's review paints an extremely accurate first impression of Balbay, but the game itself showed the main reason for my early season optimism. With Mason dishing out 7 assists, Texas got double-digit contributions from five different players (James/Pittman/Abrams/Johnson/Atchley (!!!!!!)) in scoring 76 points.

This game really sucked. Some of you might think this should rank higher, but, at the time, this game didnt have its current significance. It was essentially the inverse of our victory in Waco, which has proved to be far less impressive than it first appeared. When Missouri came to Austin, they were still unranked, unproven, and sported a 2-3 record in "true" road games.

This game was merely memorable for Dexter Pittman's heroics and the team's last-minute collapse. Sexy Dex scored 25 points in 23 minutes, which remains his career high. The end of the game was sickening, as Texas allowed a lay-up in a tie game with 5.5 seconds left, then bungled the ensuing in-bounds pass.

The feisty Bobcats and a pesky group of fans invaded the Erwin Center in a game that became too-close-for-comfort. AJ Abrams poured in 30 points, 4 steals, and 3 rebounds while playing all 40 minutes to help stem off the upset bid.

I'll never, ever, ever forgive the South O-Zone for allowing themselves to be penetrated by the contingent of Texas State fans.

Continuing the theme of remarkable individual performances, this was the night that Damion James played like an All-American. Taking over the game in the second half, Damion scored 28 points and grabbed 7 rebounds. In one stretch, James scored 11 consecutive points after the Longhorns went to full-court pressure, which generated its own Big Roy post.

James' alley-oop dunk from Varez Ward to punctuate his scoring rampage should be on all highlight reels from this season...

This was the most bizarre box score of the season. Texas simply oblitterated the Cowboys, racking up 99 points without any individual player scoring over 20. The dominance of this win is much more impressive today, as the Cowboys have rattled off a six-game conference winning streak following this loss.

My favorite memory of this game was the chippiness of the crowd when the team hit 99 points. Harrison Smith was in full gunner mode and missed another 3-pointer with 26 seconds to go. Texas got the ball back with 19 seconds left, and Rick Barnes literally ran out onto the court violently shaking his head sideways to prevent Harrison from trying again.

Occurring this past Monday, this game was meaningful and memorable for being the Senior Night for two key contributors to the program. With Aldridge, Gibson, Tucker, KD, and DJ all leaving early, it had been several years since Texas had a meaningful Senior Night.

No, it wasn't like the magical night in Pullman, but I was simply happy for the chance to give an appropriate Erwin Center send-off to two players who have been the program for my entire time on the 40 Acres. I was also happy for the win.

This was the other game that my girlfriend attended this season. Her reaction was a thorough "meh" to the crowd and atmosphere, which was unfortunately a fair assessment.

This was the game I missed with a stomach virus. Someone else will have to comment on ceremony retiring Slater Martin's number. I wrote the BON review for this game, which was the beginning of the three-game losing streak.

Instead of an individual Longhorn performance, the game itself will be remembered for the incredible shooting display of Denis Clemente and the collective effort of the Longhorns in pushing the game to overtime with a furious rally. In the game of a lifetime, Clemente scored 44 points and was perfect from both behind the arc (6-6) and the free throw line (12-12). Clemente's assault put the Longhorns into a 17-point deficit with 7 minutes to go. After tying the game with a remarkable run fueled by a static lineup and full-court pressure, the Longhorns ran out of gas in overtime.

I cant speak to the crowd or atmosphere, as I was stuck in my apartment, but this was the official stomach-punch loss of the season.

This game had the potential to be one of the unforgettable games that I've written about in the past. Instead of rising up to that level, it remained stuck in that "Very Good, but not Great" level. The crowd was monstrous during the final stretch run, but it fell short of the efforts during marquee games in previous seasons.

Definitely a solid win for the 'Horns, but it still left something to be desired regarding the overall experience...

February 25th was deemed "Kevin Durant Tribute Day" at BON, and we all chipped in with our favorite performances, highlights, and memories of KD. Despite the bottom-dwellar opponent, it was an extremely memorable night for the fans in attendance. Unlike the lackluster pre-game ceremony for VY, the basketball program gave a fitting tribute to its former freshman superstar.

The entire team came out during warm-ups wearing a Nike KD shirt, which I've included below...this was a really cool shirt, and I'm annoyed the Athletics Department didnt order enough shirts for all the students in attendance. 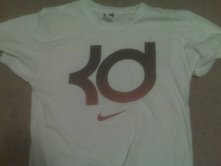 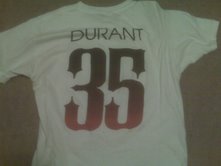 The halftime ceremony included an awesome video package followed by an emotional speech from Kevin Durant. Decked out in a dapper burnt orange tie, Durant was moved to tears by the deafening cheers from the Longhorns fans. He professed himself to be a "Longhorn for Life" and ended any doubts over his sincerity and dedication to the program. On a down note, KD spent the entire second half texting from his front row seat...

In a must-win game against the team slated to become #1 in the country, Texas--and their fans--rose to the occassion in earning an exhilirating home victory. While some fans may quibble over the merit of this victory following the game-changing injury to Blake Griffin, this should take nothing from the experience itself. This was the easiest decision on the entire list and continued the trend of at least one monumental home victory and crowd per season.

On a more personal note, this game also brought me the opportunity to fire up the crowd from center court and scream until the point of nearly blacking out from adrenaline. 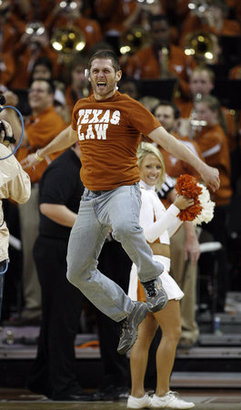