Share All sharing options for: Bevo's Daily Round Up 3.09.09

The men lost to Kansas on Saturday, but the players are confident about their ability to beat anyone.

Texas players firmly believe they can beat anyone anytime, that 9-7 Big 12 record and fifth seed in the Phillips 66 Big 12 Men's Basketball Championship notwithstanding.

Perhaps the faith isn't misplaced – not if the Longhorns play as well for 40 minutes in the postseason as they did in the first 18-plus minutes against Kansas.

Quarterback turned receiver... and now kick returner? John Chiles will get a chance to return kicks this season.

Longhorns headed to the NFL. The Cleveland Browns will be visiting Austin this month to privately work out Brian Orakpo. The Houston Texans really like Ryan Palmer.

Former Texas safety Bill Bradley and fullback Steve Worster were inducted into the Texas Sports Hall of Fame. The SI Vault has a story about Worster from 1970.

Travis Tucker was injured during Friday's game with Standford and unfortunately, Texas lost their first game on Saturday. 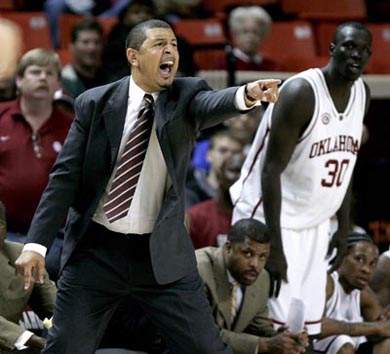 The Sooners could be without their coach next season. Georgia offered to double Jeff Capel's salary?

It was a big weekend in Big 12 basketball. Kansas won the conference title, OU beat Oklahoma State in another Bedlam showdown and the Aggies beat No. 15 Missouri.

I Am the 12th Man was wrong. The 6 game winning streak came as quite a shock.

The Big 12 tournament bracket is up at Crimson and Cream Machine.

The economy stinks, so what the heck, right? In case you don't have anything else to do at work this month, The March To Madness has set up a March Madness Pool on Facebook.

Checking on the Sooners...

Know your enemy. Bob Stoops was asked what new players have been the most impressive during winter practice.

"A lot of the young receivers have made good improvement," Stoops said. "I think overall, that group being a big question mark coming into the winter, it was really pleasing to see them really have a good winter. That was exciting."

McCoy is excited about the challenge as he returns for his junior season after earning consensus All-Big 12 honors last season. His athleticism enabled him to develop a knack for big plays with 10 of his 26 tackles resulting in lost yardage, including 6.5 sacks.

The Sooners return nine defensive starters from last season's team, losing only safeties Nic Harris and Lendy Holmes. And injuries that dogged the team last season actually could help the team as a variety of players were forced into starting positions.

The defense struggled at times last season with all of the new personnel working for injured teammates. But the unit jelled as the season progressed, producing its best efforts in the final two games of the season when it limited Missouri and Florida each to their season-low totals in scoring.

They haven't even put up their spring practice dates on the athletic department's web site. There is good news: According to AD Bill Byrne, Verizon has improved their cell service on the Texas A&M campus. It seems dropped cell calls were a big deal during last season.

Next time you are on campus, you should experience improved cellular service. As a long time Verizon Wireless customer, I was pleased to learn Verizon has been investing extensively in the wireless infrastructure here at Texas A&M. One of the issues we all face on football game day is the number of dropped cell calls. Now, with Verizon's investment, we expect to have fewer issues with cell service at Kyle Field. We will have the first test of the infrastructure during our  Maroon and White Spring Football Game on April 18. Call your friends!

When you are getting beat by 30 or 40 points, who would you want to call?

The 1968 Harvard-Yale game may have one of the most infamous finishes in college football history. Now there's a documentary about it.

How does the spread offense translate to the NFL? According to Sporting News' Dennis Dillon, not very well.

Spread quarterbacks — Texas Tech's Graham Harrell and Missouri's Chase Daniel are two in this year's draft — spend the majority of their college careers in shotgun formation. They throw a lot of passes to pre-determined areas. They don't spend much time reading defenses.

"On top of that, they won't make a lot of NFL throws," said a director of college scouting for another AFC team. "If a guy throws the ball 40 to 50 times in a game, you may see only five throws where you say, 'That's an NFL type throw,' where the coverage is tight and he has to hit a receiver in stride."

It's not just the quarterbacks. NFL scouts also have to project how running backs, wide receivers and tight ends will fit in. Even the linemen play funky in a spread offense.

A look at each position shows why the spread can spread an NFL scout's patience thin.

Just a case of monumental bad timing... The Wall Street Journal takes a look at the new luxury stadiums being built.

With just weeks before their new $1.1 billion stadium opens, the Cowboys still have 2,000 premium seats and about 50 of their 300 luxury suites left to sell. The Yankees have hired Mr. Sroka to drum up buyers for the hundreds of premium seats still in their inventory. The Mets, who once had deals for all 49 of their luxury suites, say they've had to go back to the market after one customer, whom they declined to name, backed out.

The life of a basketball referee. John Feinstein looks at referee compensation.

David Hall is one of a growing number of college referees who are giving up their "real" jobs in large part because the money for officiating has gotten so much better. Referees working in the six power conferences generally make $2,000 and up per game, plus first-class airfare and expenses. That means the top officials are making well into six figures during the five-month season.

When bad things happen to old coaches. Florida State has been penalized for one of the largest academic fraud cases in recent NCAA history and lack of institutional control. Joe Paterno's team has had 46 players charged with 163 criminal counts between 2002-08. Why has this happened?

This does not have anything to do with sports, but with the discussion about the 10% rule a few days ago, you might be interested. Seven schools want to be Texas and Texas A&M.

The seven schools are diverse in location, size and strengths: the University of North Texas in Denton, UT-Arlington, UT-Dallas, UT-El Paso, UT-San Antonio, the University of Houston and Texas Tech in Lubbock.

Lifting just one of them to national stature will take years, even decades, of financial and political will. Advocates say the effort is worth it for all of the intellectual and economic benefits such institutions would provide for Texas.

State lawmakers vow to get the ball rolling this legislative session.