Share All sharing options for: Bevo's Daily Round Up 3.10.09 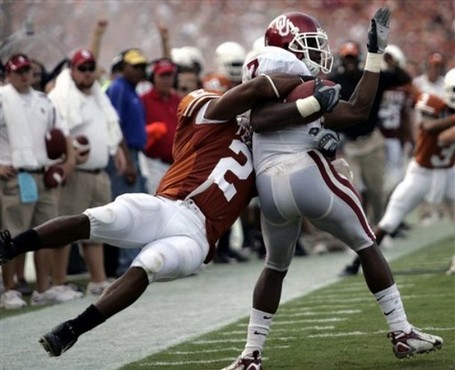 Who will the next great Longhorn pass rusher be? Sergio Kindle.

Longhorn coaches already understand how much they will miss Orakpo, an All-America performer who led the team in sacks (11 1/2 ) and quarterback pressures (30) last season. Among Texas’ primary concerns for spring drills, which are ongoing, coach Mack Brown said: "We have to have a consistent pass rush, but we need to have another guy like [Orakpo]. Who’s that going to be?"

The first opportunity will go to Sergio Kindle, who logged 10 sacks last season while shuffling between linebacker and defensive end. Kindle, a senior, will work almost exclusively at end during the spring but is expected to play both end and linebacker during the 2009 season, said defensive coordinator Will Muschamp.

Big 12 coaches like the new basketball championship format. Some of the likely benefits:

•More accurate seeding: Because of the Big 12's late finish, the bracket was all but done when the title game ended.

•Additional preparation: Barnes remembers a few years ago busing back to Austin from Dallas after a Sunday championship game and then making plans to get to Denver for a first-round NCAA game Thursday.

Why did Blake Griffin decide to go Oklahoma when being recruited by schools like Duke and North Carolina? His brother, Taylor. Guess who wrote this article for the New York Times?

Oklahoma State started spring practice Monday. There are several things to consider about the team:

1. Defense, Defense and Defense
The Cowboys have to learn it first and we're not talking schemes. Let's start with steps -- hand techniques, backpedal, shuffle, gaps, etc.

2. Offensive Depth
Seven of the offensive starters in the Holiday Bowl return and there are plenty of other players that played on offense back as well.

3. Quinn the Punter?
Based on what I witnessed in practice last season, I believe that Quinn Sharp has that thud connection punting the football that I used to hear before Baylor games when Sepulveda was punting for the Bears

Does the quarterback competition signal a meltdown in College Station?

When you think about it, the presence of Meyer, Carroll, Stoops,  Rodriguez, and Ault all make this a very exciting time to be a college football fan.

Who is your new "legendary" coach?

Big 12 Hardball has the weekly review and the college baseball rankings.

Florida State considers appealing the NCAA sanctions. Well, it worked for the Sooners.

Last October the NCAA denied Arkansas' appeal to vacate men's indoor and outdoor track titles after the school was found to have committed widespread recruiting violations. But in July, Oklahoma successfully reversed sanctions that vacated all of its football victories in 2005 because quarterback Rhett Bomar was paid for work he did not perform in a summer job. While upholding other sanctions, the NCAA agreed that taking away victories was "inappropriate."

This former OU player is up for inclusion in the College Football Hall of Fame. Boomer Sooner.

It is the off-season and everyone is on edge. Some new fire-the-coach web sites are up and running.