Ever since I started writing about fixing the Texas running game for the Eyes of Texas preview magazine, I've been intrigued by the talents of 2009 commit Barrett Matthews, a tight end/h-back/fullback from Galena Park North Shore. Given how much Greg Davis valued Chris Ogbonnaya's scheme versatility and talk of going no-huddle, which requires a base personnel package that can attack the defense in a variety of ways, Matthews seems like one of the most likely freshman to contribute in 2009. Add in the recurring problems at tight end and Matthews could even play a large role in the offense.

Essentially, scheme versatility means that a player can fill multiple roles in a base personnel package, eliminating the need for the offense to substitute and allowing it to keep the defense from substituting. Such a package puts a tremendous amount of pressure on the defensive coordinator to have a package on defense with the same versatility, especially at linebacker -- easier said than done for most schools.

Matthews provides scheme versatility by having the capability of filling myriad roles offensively. Though it might not end up being his strong suit at the college level at a little over 6-1, Matthews may still line up as a tight end on the line of scrimmage, flexed out to create mismatches against linebackers, in the backfield as a fullback, or lined up off the line of scrimmage as an h-back.

I've long been a proponent of keeping Greg Smith off the field through any means possible, making DJ Grant and Barrett Matthews extremely important members of the offense. Since the numbers in the box make it difficult to man block out of 11 personnel against a 4-3 defense, stretching the field vertically with the tight end becomes of paramount importance -- it is by getting up field into the seam that the tight end can make the opposing linebacker pay for a lack of foot speed and make the opposing defensive coordinator think seriously about going to a nickel package, making running the football much easier for the offense.

Greg Smith, of course, can't stretch the field in any direction, much less vertically. Barrett Matthews can. Though he wasn't often used as a receiver in the run-heavy North Shore offense, Matthews does possess good speed -- clocking a 4.56 in the 40, significantly faster than most of the SAM linebackers that will line up against him. Additionally, Matthews has much better hands than Greg Smith and volleyball-setter Peter Ullman and can also catch the ball in traffic.

The biggest question surrounding Matthews and his ability to line up on the line of scrimmage is how well he can block opposing defensive ends when called upon. The tight ends did poorly as a unit in pass protection last year -- which should cause Greg Davis to seriously reconsider his schemes. Even if Matthews does end up at tight end, he probably won't often be asked to stay in and pass protect, which was often a panic move by Davis last year (see: Texas Tech game).

To take advantage of his speed against smaller players, Davis may flex Matthews out as a wide receiver, either playing in the flex slot position Jordan Shipley played much of last season or split out even further. A major advantage of playing Matthews in the flex slot position is that he would have much better match ups blocking a linebacker or safety, while still being close enough to crack back on defensive ends, but not have to take play them one-on-one.

Flexed out even further in a wide receiver position, Matthews could be used as an effective blocker in the screen passing game, excellent constraint plays against defenses that want to bring blitzes to disrupt Colt McCoy's timing. Matthews also has the speed and ability to find creases in the zone defenses the Longhorns also face to make him an effective receiver as well.

The H-back position is most famous these days as a way to get into the shovel triple option that Urban Meyer favors at Florida to get Aaron Hernandez the ball and has fans lathered up hoping their offensive coordinators incorporate the play.

Urban Meyer actually recruited Matthews a bit before he committed to Texas, opening up the possibility that Meyer did see the North Shore product as an H-back in his system.

Here's why Meyer has gone to more H-backs recently:

It is also worth noting that Meyer has used more and more "H-back" types in his offense recently, which give him more versatility in his blocking schemes, but still is a micro strategy designed to affects the front and create leverage rather than effect some large change on the style of offense.

In other words, simply using an H-back doesn't effect major change on the offense, but like Chris from Smart Football says, it does help create leverage. The H-back also allows for a variation of the "counter trey," a play that would greatly help the predictable Texas running game, which already uses the counter as one of the few effective runs (though for some reason Texas running back's don't actually take a "counter" step). In the counter trey, the H-back leads through the hole as the backside guard pulls to trap the playside defensive end, providing two pulling players instead of the normal one pulling lineman in the counter play: 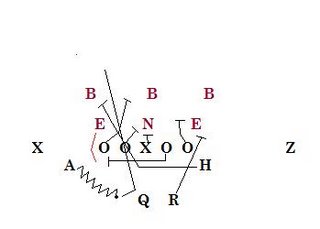 The fullback has seen little usage during the last several seasons as the Longhorns have moved to a predominantly 11 personnel team. However, Mack Brown has placed increasing emphasis on the I-formation this spring in an effort to prepare his defense for facing powerful running backs like Beanie Wells and to be able to control the clock late in the game. The use of a fullback would also greatly increase Texas' ability to run play-action passes, as every I-formation play has a corresponding play-action fake. In the 11 personnel, shotgun spread offense the Longhorns use, play-action passing is difficult and does little to deceive the defense, a major offensive problem the last several seasons.

A strong, vicious blocker who fires off the ball with excellent leverage, Matthews is physically ready to step onto the field as a freshman and compete against players with several years in a college strength training program. In fact, Matthews might be the type of player to bring some nastiness to the blocking scheme that has been missing since Kasey Studdard graduated.

More so than any other player entering the program as a freshman, Matthews has the ability to provide the offense with a variety of different looks that help solve some of the 2008 offense's deficiencies. As a result, I'm as excited about Matthews and what he may be able to bring to the offense this fall as I am about other extremely talented players like Alex Okafor, perhaps even more so.

Possessing a valuable combination of strength, speed, and nastiness, there are no questions about Matthews' abilities as a blocker, but he will have to refine his route-running skills to make an early impact. The lack of practice time in the fall to hone his ability to run crisp routes is the biggest reason to worry about Matthews contributing as a freshman. He should, however, be able to come in and compete with Antwan Cobb for time at the fullback position. On the unfortunate side of things, Davis probably isn't creative enough to start using Matthews in the H-back position or incorporate the shovel option. No surprise there.