"What A Prodigious Clout!"

Share All sharing options for: "What A Prodigious Clout!" 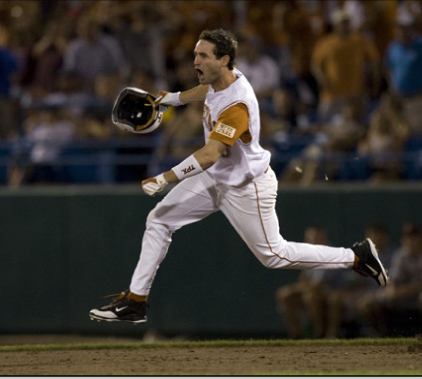 Prodigious: excessive in size or quantity

Add Craig Way to the list of folks that stepped up last night with the game on the line. Then there was Connor Rowe's homer, which can only be defined as a "walk off" shot, the first in Omaha since Chance Wheeless went yard in 2005.

Some other great quotes from last night:

Cameron Rupp: "I knew it right away."

Connor Rowe: "That's the best moment of my life I can remember. Maybe being born was better, but I can't remember that."

Augie Garrido: "I think LSU has played the best baseball in this tournament all around. They've been the most consistent team in the tournament. If it's about drama, we've got that."

[Update]: Here's the video of the Rupp home run and the Rowe home run. Watch them. Again and again and again. Tip of the hat to utexasclan for posting them and bassale47 for finding them.