"This is like going to the rodeo and riding one of those bulls and trying to stay on for eight seconds," Garrido said of coaching these Longhorns. "You know it's going to buck you off sooner or later, but you just keep trying to stay on for the ride." This quote is from a story about the first game with Arizona State, but it sums up the Horns' ride at the CWS pretty well.

The Longhorns weren’t great. Their play was flat out ugly at times. But as they’ve shown time and again in the postseason, the Longhorns have a flair for the dramatic.

Trailing the 3-2 with one out in the bottom of the ninth, Cameron Rupp rocketed a home run to tie the game. Two batters and another out later, Connor Rowe deposited the first pitch from Arizona State reliever Mitchell Lambson over the left field fence to win the game 4-3.

Texas did it again.

"The two home runs were about as dramatic as you can get," Augie Garrido.

This is one people will talk about years later.

No matter what has happened in the historic run of Rosenblatt Stadium, and no matter what still lies ahead in this dying old ballpark, the ninth inning on Friday night will be talked about as long as the College World Series is played in this town.

Quite simply, it was one for the ages.

Cameron Rupp and Connor Rowe both knew it was gone.

So did Rowe. "That ball was crushed.’’

Rupp, who homered twice in Tuesday’s win, tied the game when he drove a 3-1 pitch from Lambson over the center-field wall for his 11th homer of the season.

LSU has played the best baseball in this year's CWS, but they can't match the horns in one area.

Texas coach Augie Garrido conceded that his team’s College World Series finals opponent has played the best baseball of any team in Omaha.

LSU, after all, has hit nine home runs and holds a 32-11 scoring advantage in its three wins.

Yes, the Longhorns certainly do.

Just some friendly advice from your neighborhood psychic.

You Tigers have played your pants off. You've hit nine home runs in the College World Series. Your next error in the CWS will be your first. You pitch great.

For good luck, your coach, Paul Mainieri, even eats at the same local Italian restaurant that's the favorite of Augie Garrido. You might even have used the same silverware, but we know you're after his hardware.

You know, that big, shiny CWS championship trophy. The one that Garrido has stacked five high somewhere in his closet.

But Texas has something going for it, something mystical, something unbelievable that only those rare teams with a deep, deep resolve have. 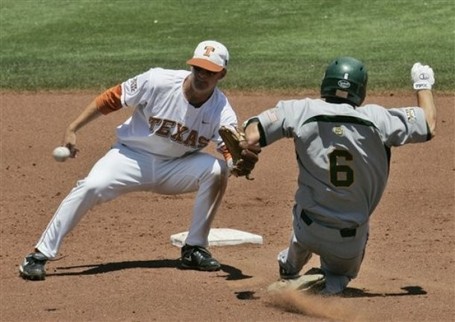 The one constant has been that every ball hit by an opponent within diving distance of shortstop has turned into an out.

"Any time we’re in a tough spot, you love to see the ball hit his way," UT catcher Cameron Rupp said. "When the ball is hit to him, he’s like a vacuum cleaner."

Not the greatest video quality, but one of the best moments in the movie.

The team's poise and patience comes straight from the top: Augie Garrido.

"How you perceive yourself has more to do in what you become than your skill or your talent," said Garrido, whose team plays today's North Carolina-Arizona State winner at 6 p.m. Friday. "So if you perceive yourself as a loser, you're going to lose. We had just finished three innings as the Bad News Bears. I reminded them that even the Bad News Bears were good by the end of the movie."

Not only do the players get baseball tips from their coach, but philosophy as well.

There are still times, though, when the Longhorns are confused. These are snippets of wisdom and advice Garrido has given his players and a few outsiders just this month:

"The second you start to try, you fail."

"Pressure is a choice."

"Total offense means doing what the ball tells you to do."

Somehow, the style works, like it did when Garrido calmly told the Longhorns during Tuesday’s 10-6 victory over Arizona State that they were going to overcome a six-run deficit. But that doesn’t mean everyone understands.

"Sometimes," second baseman Travis Tucker said, "we all look at each other and say, ‘What did he just say?’ "

Garrido's pep talk when the team was down 6-0 to ASU in the fourth inning may go down as one of the best.

Garrido sensed that yelling at his players would only sink their hopes. So Garrido, the Phil Jackson of college baseball, told the squad to think about how much fun they could have by coming back and winning. And heck, even the Bad News Bears were playing well by the end of the movie.

You gotta like a guy with a great laugh.

"He likes to joke around and keep everybody lose," Mainieri said. "At the same, he works extremely hard too, so there is some leadership by example. Jared is just a great kid to have around. He works hard, and he goes out and plays hard every day."

Thanks to Les Miles, Jared Mitchell went in the first round of the MLB draft.

Some late season position changes put LSU in the driver's seat to a CWS title run.

"We were 28-12 and had about 16 games to go, and I felt I knew my team as well as I possibly could at that point," he said. "I asked myself if we could win the national championship with things the way they were set up then. I wasn't sure we could. I thought we could be better."

Mainieri did what many coaches would never have attempted: He made drastic changes to a lineup that featured seven starters who had taken LSU to the College World Series the year before.

Louis Coleman , the SEC Pitcher of the Year, is a tough competitor.

"He takes practice like a game," Gibbs said. "I remember facing him in fall ball and it seemed like he was out there in Omaha. Once he gets on the mound, he's so zoned in. Off the field, though, he's just another guy. He's real relaxed, and that's the thing I love about him. You know that once he crosses the foul line, he's a totally different guy and he's going to be the most competitive person out there."

It has had a trickle-down effect on his teammates. Coleman has taken freshman reliever Matty Ott under his wing. ... "He just taught me the mental aspect of the game, that it's going to get tough sometimes, and you've got to battle through it," Otto said. "But if you work hard and battle through it, you're going to be successful most of the time."

The Tigers can beat you up, down and two ways from Sunday.

Eight LSU players have at least 40 RBI, and eight are hitting over .300. The Tigers have 99 home runs and 112 stolen bases. Schimpf and Sean Ochinko homered in LSU's 9-5 opening win in Omaha against Virginia. Mahtook, Nola and all-SEC designated hitter Blake Dean homered in a 9-1 beat-down of Arkansas.

"They've got a solid, solid college lineup with some pop and some good speed in there," Arkansas coach Dave Van Horn said. "They put eight runs up on us in two innings real quick. They have a lot of ways they can beat you."

Colorado Rockies closer Huston Street has played four-plus seasons in the majors, pitched in the playoffs and recently earned his 100th save at baseball's highest level.

But he still considers his experiences at the College World Series among the best of his baseball career.

"Those are, without question, some of the most fun baseball memories of my life," said Street, who made three trips to the CWS with Texas (2002-04). "I haven't been to a World Series (in the majors), and I think that would probably be the only thing that could top it."