Share All sharing options for: Texas vs. LSU Game One Open Thread 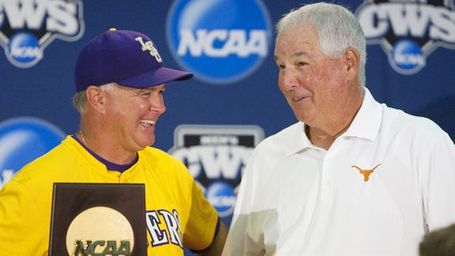 If you listen to some LSU fans, it's a matchup of talent versus magic, a matchup usually won by talent. Of course that ignores recent CWS history of 4-seed Fresno State winning last year, unseeded Oregon State beating more talented North Carolina teams in 2006 and 2007, and a supremely talented Texas team losing to unseeded CSF in 2004 only to win the title the next year with an unseeded squad (over #7 seed Florida).

No, what we've got here is a matchup of college baseball's two best teams. It's the team of the 90s (5 titles including the title in 2000 belonging to Skip Bertman) versus the team of the 2000s (6 CWS appearances, 4 title game apperances, 2 titles and counting). Texas will have to beat LSU's aces Louis Coleman and Anthony Ranaudo. LSU will have to beat Texas aces Chance Ruffin and Cole Green. It's as simple as that.

LSU fans can talk about blasting their way through Omaha and playing great ball (because it's true), but how are the Tigers going to respond if Texas takes an early lead and they have to play from behind? LSU is just 11-10 on the season when the opposition scores first. Will the Tigers wilt under pressure down a run in the 8th or 9th with Austin Wood on the mound? We've seen how Texas has responded in the CWS to these situations, hopefully we'll get to see LSU in these tough spots.

Game one starts at 6 PM on ESPN. If you're in the DC area, come to our BON watch party.

Both teams should feel right at home