64 days until the Louisiana-Monroe game.

A great way to spend a summer. Corner back Earl Thomas gives back to his hometown by participating in a football camp.

Thomas and a handful of his Texas Longhorns teammates were instructing at the Dan R. Hooks Football Camp at West Orange-Stark High School Friday and having a blast.

"I was blessed so much when I was growing up, having a community that had my back in everything I wanted to accomplish," said Thomas. "I always want to be someone that can come back to the community and give back to it."

Dennis Dodds picks the Horns to win the Big 12 South.

1. Texas -- Mack Brown smiled when I told I had his pregame speech ready for the OU game. "We beat the Sooners last year, boys. Now let's go out and get some revenge!" Yeah, it's about that and a lot of things for Brown and the Horns. Except for perhaps some suspect running backs, Texas is loaded. Brown has his best team since the 2005 national championship crew. Hybrid defensive end/linebacker Sergio Kindle should be this season's Brian Orakpo. McCoy is driven not only by the tiebreaker but also his second-place finish in the Heisman. Still, it all boils down to Oct. 17 in Dallas.

Pittman’s closest friends on the team Chance Mock, BJ Johnson, and Sloan Thomas, along with the Pittman family are proud to host the first annual "Tee It Up for Cole P" Golf Tournament. The proceeds from the tournament will benefit the Cole Pittman field house fund, which is being built at his high school in Shreveport.

We are all dying for something football-related to discuss. In 2007 Inside Texas polled their subscribers and complied a list of the top 10 Texas controversies.

5. The tenure of John Mackovic

7. Deloss Dodds: Great AD or all about the money? 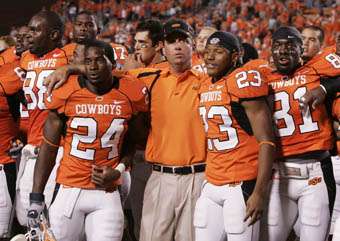 Mike Gundy seems to be in a quandary. Should he play head coach or offensive coordinator?

Like the new girl in school, everyone seems to be in love with the Cowboys. Dr. Saturday doesn't think she is all that pretty.

That's a nice analogy for summer puppy love, though I think of the Cowboys more as the new girl in school everyone falls for immediately, ignoring some fairly obvious baggage until it's too late. I picked out OSU in February as one of two teams -- along with Ole Miss, whose media bubble has been a fat, frequent target here -- destined to emerge as the hot new thing, and here we are: The Cowboys are a top-10 outfit by most estimations, top-15 at worst, on the strength of last year's near-breakthrough and the four-headed offensive monster (quarterback Zac Robinson, running back Kendall Hunter, receiver Dez Bryant and tackle Russell Okung, the last two probably regarded as the best in the country at their respective positions; not to mention Perrish Cox, a first-team All-American at kick returner according to Athlon). For a program with one top-10 finish (No. 5 in the 1945 AP poll) and not even a top-15 finish since the Thurman Thomas/Barry Sanders-powered Pokes finished 11th in 1987 and 1988, this is probably the most hyped team in school history.

It is a shame that the OSU athletic department made you walk so far. OSU players really like their new football facilities. They especially like the fact that they do not have to walk very far to get from the weight room to the locker room.

Athlon Sports has picked the Sooners to win the Big 12 South division.

"We get in our conference room, we order pizza and do all that stuff. Sometimes, we can sort these things out in a few minutes — strengths, weaknesses, schedule — but we really spent a long time on this OU-Texas thing. We had some strong-willed people. Some of us liked Oklahoma. Some of them liked Texas. We battled it out and in the end, Oklahoma got the nod. But obviously, we think these two teams are pretty close, with Oklahoma No. 2 in the nation and Texas No. 3 in the nation. Both teams have a few points of concern, but for the most part, there’s a lot to like about both these teams."

The Sooners have a freshman taking over as center this season.

Being in the middle of Oklahoma's biggest question mark isn't something that Ben Habern shies away from.

In fact, the Sooners' freshman center is excited about the opportunity to prove something to the doubters who are wondering about Oklahoma's young offensive line heading into the upcoming season with four new starters.

"There are a lot of people who don't think we have enough talent to make it through the Big 12 or to a big bowl game," Habern said. "But a lot of people aren't here during our practices. We've seen how athletic we are." 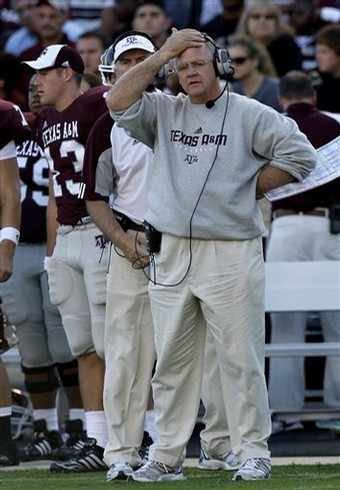 Already looking for a new coach?

The Aggies are very excited about next football season. They have already put out propaganda a video featuring head coach Mike Sherman talking about Aggie Spirit.

We can only imagine the fun that will ensue at this event. Mike Leach hosts a women's football clinic and a style show.

Head Football Coach Mike Leach and former Lady Raiders Coach Marsha Sharp have teamed up to present an enhanced evening of fun, football and style as the 2009 Mike Leach/ASCO Women's Football Clinic will now also feature a style show and dinner with some of the proceeds benefiting the Marsha Sharp Leadership Circle.

As you can see from this photo, Leach is exactly where you want to get your fashion advice.

This sums it up well.

Factory, (noun): Any place producing a uniform product, without concern for individuality. Origin: 1550.

Used in a sentence: Lubbock, Texas, is a factory for producing quarterbacks who post astronomical numbers on the football field.

Football is not a contact sport-it is a collision sport. Dancing is a contact sport. -Duffy Daugherty. The biggest collisions come in the trenches. Dave Matter, Columbia Tribune, has the a list of the best lineman in the conference.

Kansas quarterback Todd Reesing might be willing to give the NFL a try.

The Colorado athletic department got a windfall from a donor. 4.75 million to be exact.

We can all relate to this article.

Have a great 4th of July.