53 days until the Louisiana-Monroe game.

ESPN's Tim Griffin looks at the age old question: Which conference has the best tandem of quarterbacks?

The best offseason news the Longhorns received had to be the extra season of eligibility that the NCAA awarded to Jordan Shipley. Shipley had 89 receptions last season — third in Texas single-season history — and led the team with 11 touchdown catches. The roommate to quarterback Colt McCoy, Shipley caught a touchdown pass in each of the first eight games of the season — a Texas school record. He was also a valuable weapon on special teams, scoring twice and averaging 26.3 yards per kickoff return. Replacing Quan Cosby’s 92 receptions won’t be easy, but the Longhorns have recruited this position well, and a couple of players appear poised for a breakout season. Sophomore Malcolm Williams averaged 17.9 yards per catch last season and posted a career-high 182 yards and two touchdown catches in the memorable shootout with Texas Tech. Juniors Brandon Collins and James Kirkendoll combined for 56 receptions last season, while sophomore Dan Buckner ranked as the No. 40 prospect in the 2008 Athlon Consensus 100. Standout tight end Blaine Irby had his 2008 season cut short by injury, and his future is in doubt. His loss would be a significant blow for McCoy & Co.

How are the Big 12's Heisman prospects spending their summer? McCoy and Bradford went to camp.

The Manning Passing Academy typically lures some of the nation’s top high-school quarterbacks and wide receivers to south Louisiana.

About 1,000 onlookers were on hand to cheer the college and professional quarterbacks competing in the Air It Out session at Nicholls State University’s John L. Guidry Stadium.

Temperatures, which reached a high of 93 degrees but felt like 98, didn’t put a damper on the crowd’s enthusiasm, as they cheered Colts quarterback Peyton Manning, his younger brother Eli of the Giants and numerous college quarterbacks, including 2008 Heisman Trophy winner Sam Bradford of Oklahoma and Colt McCoy of Texas.

No video on this one. Yes, it exists but who really wants to see it? The 2008 Texas-Tech game comes in at No.2 on Tim Griffin's most memorable list.

Good to know. Mack Brown is getting the team ready for the 2009 season by hiring a guy who has the team to talking about love, dreams and vampires.

Checking in on our future foes, the Wyoming Cowboys. The team will be wearing Nike uniforms for the first time in school history. Wow. The Aggies don't even get to do that.

In an effort to alleviate the pain of the off season, I'll pick a Great Games/Great Moments from the mackbrown-texasfootball site for each BDR until August.

GREAT GAME
Texas 45, #3 Houston 24
Saturday, November 10, 1990
Memorial Stadium (Austin, Texas)
Undefeated, third-ranked Houston rolled into Austin with its unstoppable "run-and-shoot" offense led by Heisman Trophy candidate David Klingler. In the previous three years, UH had run up 173 points (57.7 per game) on the Longhorns in winning three consecutive games. In 1990, it was a different story. The UT defense, that would go on to finish the season ranked No. 1 nationally in pass defense, grounded the Cougars in impressive fashion. At the same time, Texas rolled up 626 yards of total offense of its own, the most by a Longhorns team since 1969. In all, UT intercepted Klingler four times and held the Cougars to 81 yards on 31 plays when the game was being decided in the second and third quarters. In the meantime, UT quarterback Peter Gardere completed 20-of-28 passes for 322 yards and fullback Butch Hadnot rushed for 134 yards and two TDs to lead the Longhorns. A raucous sellout crowd enjoyed every minute of the win that helped propel Texas into the 1990 Cotton Bowl. 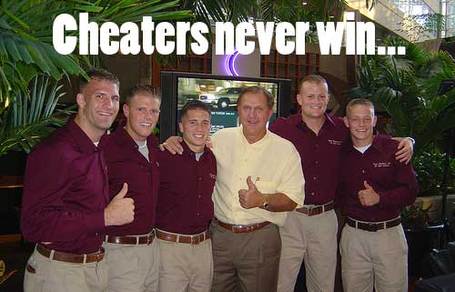 Barking Carnival has their 4th installation of cheating in college football and I Am The 12th Man does not like it one bit.

I read this blogpost when it originally came out, and was reminded of it recently while looking at the recruiting classes of some other schools. Basically, the author, a TaylorTRoom, argues that degrees at certain universities are more valuable than others, and this lack of value for some schools causes an inequity, and this inequity causes them to cheat. This theory works well when it is taken from the viewpoint of a texas fan. Some texas fans, in their ultimate arrogance, believe the only reason another school can ever beat texas is because they must be cheating.

...The other problem with Taylor's theory is that if we accept the premise that degrees at certain schools have more inherent value than others, so a scholarship to a certain school, like texas, has more value than a scholarship offer from other Texas state schools, and therefore texas is at a competitive advantage in recruiting, why has texas been busted for cheating? texas' football program has been busted three times for major recruiting violations, including once under Darrell Royal, Sooner alumnus and namesake of their football stadium, and twice during the 1980's. If texas is already at a competitive advantage to everyone else because their scholarships are worth more than anyone else they are recruiting against, why are they having to offer extra inducements to recruits to get them to sign with texas? Why did texas have to cheat in baseball to win a national title in 2002?

Want to know why someone goes to Texas A&M? This video supposedly answers the question. The very best of Aggie marketing.

Can OSU go undefeated this year? Someone in Tulsa seems to think so.

Many teams are turning to the two-back system, or platoon backfields, including the Sooners.

And at OU, Chris Brown and DeMarco Murray became the first tandem in Big 12 history to rush for more than 1,000 yards each in a season."I think (the two-back system) keeps them fresh, where they’re not beat up," OU offensive coordinator Kevin Wilson said. "They’re not worn out, they’re fresh and there’s some juice in their step.

In addition to keeping running backs fresh, the impact of the two-back system has been considerable.

It’s changed the way schools with proud running back traditions have recruited. Instead of targeting one running back, these schools have been able to stockpile because they’re now playing multiple running backs.

But we do not want a repeat of the 2000 season... This year's Sooners share a similarity with the 2000 national championship team.

Since OU’s title in 2000, only two teams have won a championship with fewer than 40 starts on the line entering the season. Southern Cal won in 2004 and Florida in 2006, both with just one returning starter.

Some have made the statement that changes in college football have diminished the importance of offensive line play. And some don't buy into that theory. at all

College football has changed, and offensive line play isn’t as valuable as it once was.

"You can perform at a higher level with less up front, no question."

Many of Venables’ comrades disagree. Some of his players aren’t buying it.

"Offensive line is huge for every team," said Sooner linebacker Ryan Reynolds. "The game starts up front. Without a good offensive line or defensive line, you can’t go very far."

Crimson and Cream Machine looks at what everyone is saying about the Land Thieves.

When you have the longest home winning streak in the nation then people want to see you play. ’s season ticket renewal is at 99%. Aren’t we supposed to be embarrassed for losing the BCS bowl games in spite of three consecutive conference championships? I guess that’s just something losers say.

What else is there to spend money on in Oklahoma?

Blaine Gabbert has some big shoes to fill at Missouri.

Gabbert entered the spring of 2009 knowing that he was the frontrunner to replace Daniel at quarterback. Coming off some fairly disappointing mop-up playing time in 2008 (5/13 for 43 yards), Gabbert committed himself to being prepared for a starting position in 2009. His 5-star talent will take him a long way this year, but he still must avoid costly interceptions that could cripple offensive production. For example, the sophomore quarterback threw a questionable interception to Kip Edwards in the first quarter of the spring game which stopped a drive that was nearing the red zone. If the Tigers want a high flying offense, Gabbert must be smart with the football.

Colorado coach Dan Hawkins visits Macchu Picchu with his family and he has some motivational thoughts about the upcoming season.

CU's Tyler Hansen plans to give some stiff competition for the starting quarterback spot.

Baylor is ready to end their long plight. It is time to win enough games to get a bowl invitation.

What’s this? Are you kidding? The buzz at Baylor is the Bears might be potent enough to end their 15-year bowl drought. Really?

Fans must be awfully excited around Waco, Texas.

"Actually, they’re kind of big bandwagoners right now," Baylor center J.D. Walton said this week. "They haven’t really bought into it yet. They’re not die-hards. But that’s what we get for not being too good for quite awhile. We’re ready to turn that part around and get the fan base back into it."

We are sooooo misunderstood. Two guys on KUSports.com pick Michael Jackson songs to go along with each Big 12 school. The song they picked for Texas? We Are The World. (For more on the misunderstanding of the Texas psyche, see CornNation Big 12 Taunts. Scroll down to comment by Section 37.)

And our beloved Aggies? You Can't Win.

Any other thoughts on Jackson musical selections for the Big 12?