Available Now: The Eyes of Texas 2009

Share All sharing options for: Available Now: The Eyes of Texas 2009

Christmas in July! It's here: The Eyes of Texas 2009 is off the press and on newsstands across the state of Texas (HEB, Target, Walmart, book stores, etc.). Fans out of state can also buy the publication online at Maple Street Press, shipping now.

Additional details about the magazine are after the jump. 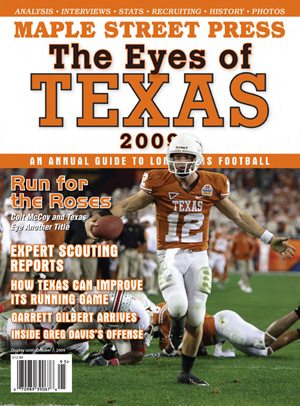 This year's annual is, like the last two, divided into three sections. The first 60 pages of the annual are devoted to previewing the upcoming season, the next 30 pages cover the program from a big picture perspective, and the final third of the magazine is, once more, dedicated to Longhorns history and traditions.

1. Roster Preview (PB) -- A position-by-position breakdown of the 2009 Longhorns, with emphasis on key analytical questions surrounding each group of players.

6. Colt McCoy Career Perspective (billyzane) -- How a skinny three-star quarterback became as remarkable in his own way as was his legendary predecessor.

7. Fixing the Running Game (Big Roy) -- It needs to happen. Big Roy has some ideas how to get there.

8. Sea Change in the Red River (PB and 54b) -- From the unthinkable low of 2004, Texas is on the brink of delivering a potential knockout to "Big Game" Bob Stoops. How it happened and why this fall's game is the biggest yet.

9. The Triumph of Mack Brown (40 Acres Sports) -- You know Jeff and Abram from their great baseball coverage, but here they provide a terrific look at the particular ways Mack Brown has evolved to meet the highest of expectations.

10. Who is Greg Davis? (Chris Brown, Smart Football) -- You hate Greg Davis, don't you. But do you understand what he's doing? Chris Brown breaks down the X's and O's.

11. Burnt Orange Gold (Horn Brain) -- Where do the best recruits in the state of Texas come from? And where do they go to school? Horn Brain takes a comprehensive look at Texas recruiting from a macro perspective.

12. We're Texas (PB) -- How a particular form of Texas pride has hurt the program over the last 40 years, and why Mack Brown has brought the program to the brink of a level of success not seen since the Royal era.

14. The Underappreciated (Adam Jones, Rose Bowl Dreams and Jones Top Ten) -- Adam Jones looks back at the last 11 years of Texas football in a search for the most underappreciated 'Horns of the Mack Brown era.

15. Red River Shootout History (whills) -- An epic look at the greatest rivalry in college football, from the earliest days of Longhorns dominance, to the remarkable OU runs in the 50s and 70s, to the present day duel between Mack Brown and Bob Stoops. With an afterword interview with Bob Stoops, from our own dimecoverage.

16. Elevating the Atmosphere (txtwstr7) -- Why is DKR so quiet? And what can be done to bring it to life? Txtwstr7 takes a look.