You can watch Media Day video on the Big 12 Conference site.

The first question Snyder received Wednesday at Big 12 Conference media days was if there’s a danger that he might actually "kill" himself in his attempt to restore the roar to the Wildcats’ program.

"I hope you said that in jest," Snyder told the Kansas City Star reporter who asked if this challenge could actually be a coach-killer

Mike Leach has some thoughts on replacing Graham Harrell and Michael Crabtree.

"I don’t think it’s really that dramatic," Leach told the Big 12 media day audience. "A lot’s been made out of it, but there was a time when nobody had heard of Harrell and Crabtree, too. A couple of years ago, the questions were along the lines of, ‘Is this Harrell guy going to be any good? How’s this Crabtree? What do you mean he’s just a freshman?’ There’s guys who are going to play that most people haven’t heard of, but they’ve been around our place for a while and we feel pretty good about them. I don’t feel like there’ll be a big letdown this year."

Leach has a lot of confidence in Taylor Potts.

Brandon Carter is also impressed with Potts. And he got a brand new tatoo just for the occasion.

"I was worried about that in the earlier months of the year," Carter said. "Once he started getting some reps and working out with us more, I think he was more comfortable with it. I think he's going to be able to have that leadership role."

Texas Tech offensive lineman Brandon Carter showed up to media days with a brand new tattoo on the left side of his head. Appearing to shoot out of his multi-colored Mohawk, the latest in his collection of body art featured a skull on top of a spider web.

"If we played 16 games, that would be great. I would guarantee everybody 12 games."

Leach said the only reason college presidents and other administrators balk at a playoff is because of resistance to change. Most college coaches favor a playoff. But there has been a long tradition of postseason bowl games and in recent years the Bowl Championship Series has identified the national champion after a single bowl game.

Everyone in Dallas was curious about that 10 win statement.

In no surprise, the first question asked of Colorado coach Dan Hawkins this morning during Big 12 Conference football media-day interviews was about his "10 wins" statement to players and boosters during the team banquet in December.

Hawkins, whose team went 5-7 in 2008, appeared ready - almost eager -- for the question. Hawkins said he did not guarantee 10 victories this season. But he did want to set a high bar of expectations for his team.

"I always love good Internet rumors out there that everybody kind of jumps on as fact," Hawkins said, with a chuckle. "Here's the deal with that. It's like bringing our football players to (the new Dallas Cowboys Stadium) yesterday. I think the goal is always excellence.

The players like the idea of a winning season.

It felt realistic to us," Riar Geer said of Hawkins’ 10-win proclamation. "We definitely feel like we can win 10 games."

Phil Steel believes Dan Hawkins is on the hot seat.

Dr. Saturday is looking at gripping quarterback battles. Colorado's Cody Hawkins and Tyler Hansen are in for a fight.

The Incumbent. Bless Cody Hawkins, who's fought courageously for two years against the notion that he's too short, too slow and doesn't have the arm to keep pace with the other prolific quarterbacks in the Big 12, but he's yet to prove any of the critics wrong: In the most high-flying league in college history, he's finished as the least accurate regular starter in the conference two years in a row and last year was the least efficient, as well.

The Scrambler. Although he did wind up attempting 65 passes in three-and-a-half games of significant action, true freshman Tyler Hansen was clearly brought in to avoid putting the ball in the air to the greatest extent possible. 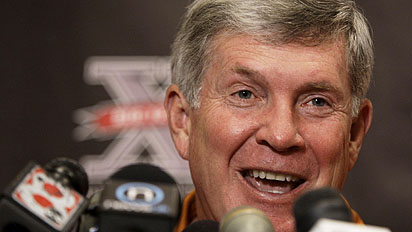 Video of the press conference here.

Brown summed it up well:

The tiebreaker formula hasn't changed, yet Texas coach Mack Brown -- who didn't like the setup even before last season -- said there is an easy way around it for the Longhorns.

"If we had played better at Tech and won the game, we'd have been in the conference championship game," Brown said Wednesday at the Big 12 media days. "A lot of that comes from us. We need to learn from that and move on, quit talking about the system and just go play."

They're bitter, still, almost eight months later. You would be too if you had a championship snatched away from you by a bunch of faceless voters and soulless computers while your biggest rival tap danced all the way to the BCS title game.

They're bitter, but they're Texas, which changes things. Texas can't complain (much) because it's Texas, the school with the best of everything. Everything except that victory over Texas Tech last season. Twelve-and-one might as well have been 6-6 after the Longhorns lost that infamous three-way tiebreaker in the Big 12 South.

And NewsOK keeps milking this story for all it is worth.

There was a surprise guest.

A remorseful Sergio Kindle told reporters Wednesday at the Big 12 media days that he learned a valuable lesson last month after crashing his car into an Austin apartment building while he was text messaging.

Kindle said that Texas head coach Mack Brown has already taken disciplinary action against him, but declined to provide specifics. The punishment, Kindle said, will not include suspensions from either games or practices.

Texas quarterback Colt McCoy presses his lips together as he listens
to a question during Big 12 Media Day in Irving, Texas,
Wednesday, July 29, 2009. (AP Photo/Donna McWilliam)

Colt McCoy can be even better.

The comparisons are mounting: Colt McCoy and Vince Young, 2005 season and 2009 season.

McCoy spent part of the summer on the family farm.

A few other articles of interest...

Five Big 12 tight ends are on the Mackey watch list.

Trying to earn more television money while maximizing exposure for his schools is taking much of Big 12 commissioner Dan Beebe's attention these days.

Beebe called working on settling that television question as the "major issue" that currently is facing him in his role as the conference's chief executive officer.

"I think that's fair to say because it was such a strong proponent of what put us together in the conference in the first place," Beebe said. "The origins of this conference was to get together to find a more valuable spot in the marketplace. We need all the platforms we can get for the quality of play that all of our student-athletes provide."

Thayer Evans wrote another article for The New York Times. This time A&M gets his attention.