23 days until the Louisiana-Monroe game

"He takes notes in the meetings and asks questions, asks the right questions," Texas defensive coordinator Will Muschamp said. "He watches film in the right way, and he does it every single day."

"Not typical enough," Muschamp said. "We've got to get more guys who see his attitude and approach to the game."

Jordan Shipley has been named to the 2009 Biletnikoff Award watch list.

Mack Brown blogs about the day in the life of a UT player during training camp.

The Aggies are back. Back in College Station.

If things don't work out at quarterback, Ryan Tannehill wants to move back to the receiver position.

"I came here to be a quarterback," Tannehill (right) said after practice late Monday night.

But he's also earned a reputation, with good reason, as one of the Aggies' biggest team players. Here's one reason why: Tannehill told me he'd want to move back to receiver if he doesn't earn the starting quarterback gig.

"I definitely want to be on the field," Tannehill said while walking to the Bright Complex after a two-and-a-half-hour practice. "It's hard to help the team standing on the sidelines."

This year, Mike Sherman wants a different tone in the locker room and on the field.

Trent Hunter was one of 10 true freshman who played last year. They were talented, but it was obvious they did things the right way, Sherman's Way, which apparently wasn't the case for many of the upperclassmen.

"I think [a divided team] is one of the worst distractions you can have in a locker room," Hunter said. "Guys not getting along and not acting like a team. That's just one of the things you can't have as a football team."

Hunter grew into one of the team's leaders, but it's hard for freshmen to tell upperclassmen they aren't moving the program forward.

"It was rough, it was a rough ride," Hunter said. "You just tried to do the best to set this year's foundation."

New facilities can't do anything but help recruiting.

Of the 15 players on OSU's 2010 commitment list, coach Mike Gundy estimates that five made their decision ultimately because of the Cowboys' facilities upgrade.

Georgia's defense is attempting to prepare for Dez Bryant.

"Dez Bryant will be a big challenge for our whole defense, because one guy will not be able to shut him down," Miller said. "It's going to take a total team effort to shut him down, as well as their other receivers and their running backs." 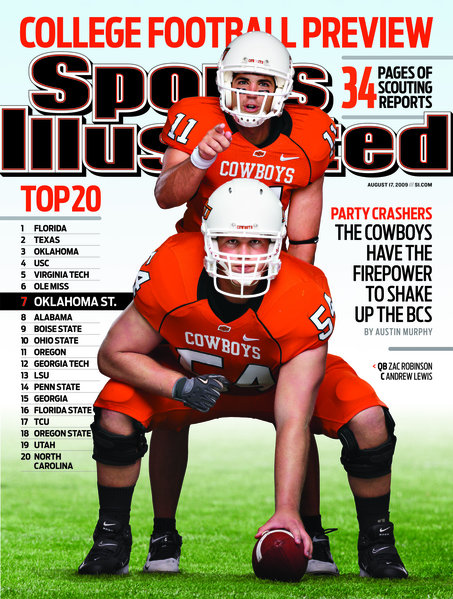 What about that SI cover curse? The Cowboys get the cover of the regional SI magazine coming out today.

Another roommate story. Cornerbacks Perrish Cox and Terrance Anderson will bookend the field for the Cowboy defense.

As a rookie, Cox was good enough to get some playing time at cornerback. He made eight starts in 2007 and 13 last season. As a senior, he has developed into a possible All-Big 12 defender and still ranks among the more dangerous return specialists in college football.

Now a senior, after performing extremely well during the spring, Anderson has the other cornerback starting job.

When the Georgia Bulldog receivers come to town for the Sept. 5 opener, they will be chased by roommates — Cox on the wide side of the field, Anderson on the short side.

said. "I've gotten playing time since my sophomore year, so I'm accustomed to running with (the No. 1 defense).

Sam Bradford is motivated by one thing.

"Yeah, I've watched the game and it's especially frustrating," Bradford said. "We were very good in the red zone all year and then to see us not execute all season is very frustrating. We can learn from it that if you want to win, you have to convert every time."

The loss was the Sooners' fifth-straight BCS bowl game loss and third-straight title game. That defeat has helped unify the Sooners as they prepare for the season.

"Any time you lose a national championship game, it will stick with you," Bradford said. "I think about it a lot. Anyone on this team who told you they didn't think about it would be lying to you."

There is a center shortage in Norman.

With projected starter Ben Habern and backup Brian Lepak both limited by injuries, Oklahoma has started preseason camp preparing for the worst at center.

Tight end Brody Eldridge has been handling the snaps with the first team, getting ready in case he's called upon in the Sept. 5 season opener against BYU.

"Just to develop depth," Sooners coach Bob Stoops said. "Just to make sure that if you're ever in an emergency situation, you've got someone that can handle it. It's natural for Brody. Blocking's blocking."

"The best lineman that I've had since I've been here — and I did have two former players (Jammal Brown and Davin Joseph) who played in the Pro Bowl last year that were first-round picks — is No. 71," Wilson said of Williams. "It's not close."

You may see a lot more players tossed out of games because the Big 12 is cracking down on cheap shots to the head area.

Texas coach Mack Brown admitted he is petrified of the possibilities.

The intent is to rid the game of deliberate, violent hits to the heads of unprotected, defenseless players with the purpose of causing injury. No reasonable person save maybe Skip Bayless would argue against that mission.

So what happens when, on the third play of the game, Texas' Sergio Kindle unintentionally whacks a falling Oklahoma quarterback Sam Bradford above the shoulders a few seconds after his release, and one well-meaning official flags the Longhorns' best defensive player for a personal foul and ejects him from the game?

Or if OU's Auston English did the same to Colt McCoy long after the whistle, not that that would ever happen (read: 2007 game), and is escorted to the Sooners' sideline for the rest of the game.

The committee also supported moves to continue flagging as unsportsmanlike-conduct personal fouls what I consider innocent celebrations. For example, Washington's en masse party in the end zone with a ball flipped in the air — UW missed the long-distance, game-tying extra point in a 28-27 loss to BYU — and Quan Cosby's dive into the Fiesta Bowl end zone after the Longhorns' winning touchdown. Spike a ball or flip it up, still a penalty. Officials will also flag those impromptu first-down gestures by players as taunting fouls.

For a while there the theory was that a big non-conference win could catapault you into the big game, ala Texas vs Ohio State in the mid 2000's. But now the reality is that a big win by someone in your conference can have positive ramifications on all members. Case in point: the SEC and ACC had nearly identical pre-bowl non-conference records last year, and a good case can be made that the ACC played a harder schedule. But in the big matchup between the two in the first week, Alabama pummeled Clemson and the SEC never looked back. And what happened out west? USC demolished Ohio State, but the rest of the Pac10 fell asleep against the Mountain West. Sorry, Trojans.

So how your conference does as a whole can certainly factor in to where your team stands - being ranked highly and winning as much as everyone else just doesn't cut it anymore. As such, in addition to the usual conference standings I post with my weekly rankings, we'll be going more in-depth with the conferences this season.

Nine Big 12 players are on the 2009 Outland Trophy watch list.

Tim Griffin predicts that nine Big 12 teams will go bowling this year. Even the Aggies.

Here is one of those "What's Hot, What's Not" list" from ESPN's Mark Schlabach.

The Bears need to be able to count on their defensive ends.

It’s a quarterback’s world in the Big 12.

The passing game makes nearly every offense go throughout the league, making it more important than ever for defenses to pressure quarterbacks out of their comfort zone.

"A sack to a defensive lineman is like Christmas to a little kid," Baylor sophomore defensive end Zac Scotton said. "Every one is precious and game changing."

Scotton, sophomore Tracy Robertson, redshirt freshman Gary Mason and junior Jameon Hardeman know they have to step up and deliver.

Though it’s one of the youngest and least experienced areas of the team, Baylor defensive coordinator Brian Norwood has confidence the defensive ends will get the job done.

Now that Crabtree has departed for the NFL, who will be the Red Raiders top receiver? That coveted spot will probably go to Detron Lewis, but just don't comapre him to that other guy.

"I'm my own man," he said after Texas Tech's practice on Sunday.
"I'm Detron."

"I'm embracing that role," he said. "I knew I was going to be one of the guys [expected to step up] when Crab left. I just don't want to be compared to him."

So why is Mike Leach still in lubbock?

Why hasn't he jumped to a school with more resources?

Miami and UCLA have called in the past and Leach, depending upon who's talking, would have walked to either job or didn't return the calls. During the winter he interviewed with Washington, which led to some bizarre contract negotiations with Texas Tech. In April 2008, with three years left on his contract, Leach asked for a $15.25 million, five- year extension. Myers wouldn't discuss it until after the 2008 season.

The priate gets his own Texas Monthly cover.

Missouri no longer has the team's leading scorer from the past three years to rely on in clutch situations. Chase Daniel? Jeremy Maclin? No, the kicker Jeff Wolfert.

Last year, then-kicker Jeff Wolfert built a reputation for consistency. When Missouri football coach Gary Pinkel called on him for field goals, he delivered at a rate of 74 percent. In three years, Wolfert never missed an extra point.

This is not the list you want to be on. Iowa State made ESPN's Bottom 10.

"Man In The Mirror": If you want to make the world a better place, take a look at yourself, then make a change. The Cyclones are counting on new coach Paul Rhoads to make that change. 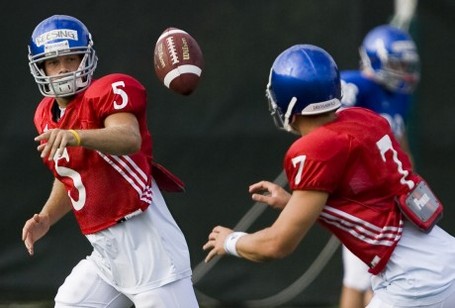 Former Kansas State football coach Ron Prince is asking for $3 million in punitive damages as part of his counterclaim against the university.

Prince’s agent, Neil Cornrich, said Kansas State "acted with reckless disregard of the truth and duties under the law" and "will profit from its wanton and malicious misconduct to the detriment of Mr. Prince…"

This has to be the worst collegiate marketing idea ever.