Share All sharing options for: Introducing the Pundit Roundup

College football is a unique sport for many reasons, some of which differentiate the game we love in good ways and some in bad ways.  To many of us, one of the of the most important aspects of college football is how it crowns its champion.  Contrary to popular belief, the champion is in fact crowned "on the field" but the teams competing in the national championship game are chosen based on a calculated determination of who the best two teams are during the year.  And two-thirds of that determination is comprised of human voters who are notoriously malleable based on whatever narrative strikes their fancy.

Who can forget last year's 45-35 campaign?  Lost in the disappointment of drawing the short straw in the Big 12 tiebreaker was that the campaign actually worked with the human voters.  Starting from almost a full spot behind OU in the polls, the media narrative turned from "Wow, OU's offense is unbelievable" to "Wow, Texas is sort of getting screwed here" (I like to think we had something to do with it...this Mark Schlabach article is almost point-for-point with this post) and the human voters shifted with it.  Texas pulled a fraction of a point ahead of OU among human voters and would have won the tiebreaker had it tied the Sooners in the computer poll.

And even if the media isn't having an effect on who plays for the national championship game, they can still affect our enjoyment of the sport.  Great sports writing and analysis draw us into the deeper layers of the game, while awful in-game announcers drive us insane.  The tongue bath ESPN gave USC leading up to the Rose Bowl Championship Game made Texas' victory that much sweeter.  In short, the media is inextricable from the fabric of college football in a way that it's not with any other sport. And that is why every week I'm going to take a look at the best and worst that the media has to offer, tracking narrative trends and the effect those trends may have on the BCS rankings, and also just plain making fun of media members who deserve it.  Remember this?  Yeah, there will be some of that.  But there will also be frivolity.  Follow me after the jump for examples!

I must note that this post is merely an introduction to the Pundit Roundup and a way for me to try various things out before the football season starts.  I've got a few ideas for recurring features, such as video critiques of play-by-play announcers and College Gameday nonsense (read: "The Lee Corso Report"), line-by-line "Fire Joe Morgan"-style take-downs, highlights of the best sports writing/reporting available (aka "The Bruce Feldman Report"), and much, much more.

I'm also going to try a little something I quite obviously stole from Conan O'Brien.  So many athletes and media members have Twitter accounts now and their feeds are often a better look inside the game and inside their minds than their mainstream outlets.  Sometimes, it's also an avenue for letting out the crazy non-sequitirs.  For instance, Kirk Bohls had a doozy the other day:

No word yet on whether Bliss planted a dime bag on the homeless guy.

But because the Twitter Tracker won't always feature Austin's very own Oscar Wilde wannabe, I felt it necessary to keep track of what Bohls' columns say about his mental state as it relates to brands of cereal. What?  Yeah, it's called Serial Bohls and it's a pun.  It may or may not work going forward.  Deal with it.

Lest you think this is all about bashing the mainstream media, may I present this pie chart: 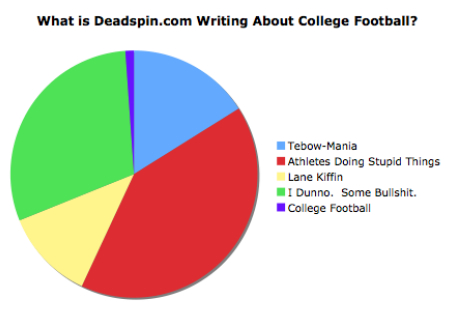 And now the pièce de résistance of the Pundit Roundup, The Undulating Curve of Media Hype.  I stole the general idea from a mini-feature that New York Magazine runs every once in a while and adapted it for my purposes.  The idea is that media hype has a life cycle as it relates to the consumer of such hype.  Most hype starts off slow, growing in scope, until it reaches a saturation point at which time there starts to be a backlash (right around the time ESPN does a soft-focus feature on it) and eventually there reaches a point where we desperately want the hype to end.  And just after that, the next big thing is getting hyped and you either think to yourself either "Well, this annoying thing is a lot better than that new annoying thing" or "No, seriously, stop talking about this crap..."  So with apologies to Mr. Adam Sternbergh (imitation really is the sincerest form of flattery, sir), here it is (if it's too small to read, click on it and it opens full-size):

So there you go.  Enjoy.  If you have any comments, criticisms or suggestions, please let me know.  I'm just trying this out.