16 17 days until the Louisiana-Monroe game

The prevailing memory regarding Texas and Oklahoma from the 2008 season is that the Sooners played for the BCS championship at the Longhorns' expense. When the final BCS standings came out in December, Oklahoma got the chance to play for No. 1. Texas watched the Sooners from home. Therefore, the Sooners got the best of their biggest rival.

The truth is a little more complicated. In Oklahoma, the Sooners and their fans look back farther than December. They go all the way back to October, when Oklahoma took a big lead early (14-3 in the second quarter), a smaller lead late (35-30 in the fourth) and lost 45-35. That memory resonates with the same power as the third consecutive Big 12 South championship and all the bitterness of the BCS National Championship Game loss to Florida.

To the three R's most important in Texas and Oklahoma -- Red River Rivalry -- add a fourth. Both teams are looking for revenge.

"That happens with that game," Texas coach Mack Brown said. "Everybody needs to be mad before they get there."

Everything you never wanted to know about heat and fluids. From Camping With Coach Brown:

Kenny told me during a typical practice in this heat, the guys need to replace about 24 ounces of fluid per hour. That means they need to be hydrating regularly, and we build in multiple breaks during practice to do that. There are water stations and trainers all over the place helping the guys. I was told that during a typical practice, we consume 90 to 100 gallons of water and Gatorade.

The Austin American-Statesman has a profile of Jordan Shipley.

Here's a preview of the Wyoming Cowboys.

The Cowboys were picked to finish last in the Mountain West Conference this season by the league coaches and when coach Christensen was asked for his response to the results he didn't seem all that surprised.

According to TicketCity, the Texas-OU game tickets are coming in second in ticket price to the Ohio State-USC game.

They are here! HEB is now carrying UT and A&M branded chips.

The big question still remains. Is Zac Robinson going to be 100% healthy this season?

Yes, it may be just a mildly pulled leg muscle. And yes, all reports have Robinson returning behind center for Oklahoma State when football practice resumes Tuesday. But the first shadow has been officially cast on the 2009 season.

Maybe it’s partly due to the fact that Gundy mentioned this past week that Robinson has has gone through this type of injury before. An injured hamstring is like an injured back: Does it every really heal?

The biggest problem with this injury, of course, is that Robinson does almost as much damage with his legs and he does with his arm. Robinson’s running ability makes the Cowboys’ offense much harder to defend.

Redshirt freshman running back Kye Staley is out for the season.

CollegeFootballNews.com has ranked the Cowboy offense as the best in the country.

The web site's reasoning for placing the Cowboys in the nation's top spot: "Want to beat Oklahoma State? You might have to put 45 points on the board just to hang around with Zac Robinson and the Cowboys...After finishing seventh in the nation in total offense two years ago, the OSU offensive machine was even better finishing sixth in the country averaging 488 yards and 41 points per game. Possibly the nation's most balanced and efficient attack, there are four superstars to build around in QB Zac Robinson, WR Dez Bryant, OT Russell Okung, and RB Kendall Hunter, with Bryant and Hunter likely to be among the top ten players taken in the 2010 NFL Draft." 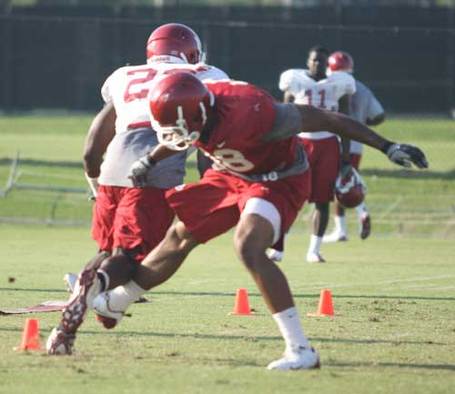 Is what Brandon Spikes had in mind? Photo from Barking Carnival.

Dan asked him now that he’s had time, how does he feel about the loss to Florida in the BCS National Title game and whether the Gators won or the Sooners lost it.

"I feel like Florida won it," Stoops said. He pointed to a number of tough plays the Gators made down the stretch. Stoops also said that Tim Tebow’s scrambling caused them problems.

ESPN's Tim Griffin has predictions for the Big 12. Two of note:

8. Game of the year: Texas vs. Oklahoma in Dallas, Oct. 17 -- Is there really any other? The South Division's balance of powers should be set in this game again as the division's winner likely will come from this game for the 11th straight season.

10. Team that will disappoint: Oklahoma State -- The Cowboys will be a solid bowl team but won't live up to the preseason hype that has thrown them into the preseason top 10 as a potential BCS surprise team.

"We've got to continue what we started today," he said. "When I talk about getting better, it's about execution, consistency and doing what we're asking them to do time after time. I'm seeing some progress, but at the same time we're not near where we want to be. We have high standards."

The Jayhawk defensive line doesn't talk much. You could say they are a little on the passive side. That could be a problem for defensive-line coach Tom Sims.

"How do you get them excited?" Sims asked. "You know, that’s the challenge, to be honest. A lot of them do take kind of a workman’s attitude. They bring their lunch pail and don’t say much. But hey, what we have to understand is that life ain’t a dress rehearsal. This is the real thing. You get excited about every day. Because our game is a closing window, and when it’s done, it’s done. When it’s closed and you’re outside of it, you want to look through the window and say, ‘I accomplished some things and enjoyed it along the way.’ "

Kansas Defensive end Maxwell Onyegbule is all business. All numbers.

F.Y.I. Mark Mangino wants you to know he isn't switching to a 4-2-5 formation.

News out of Jayhawk camp this summer had Mangino abandoning his base 4-3 defense to better take advantage of a deep secondary and hide his unproven linebacker unit. At media day, however, Mangino was adamant that his primary defense would stay the same.

"There are two or three really good teams in this league that will run the ball down your throat if you try to play in the nickel all night," Mangino said.

Gary Pinkel is shaking up his depth chart.

It's one of the oldest motivational tricks in the book, but one that Missouri coach Gary Pinkel apparently is employing in the middle of two-a-day practices for his young team.

Sophomore Jerrell Jackson has moved ahead of Missouri's leading returning receiver, Jared Perry, after Perry struggled through the Tigers' scrimmage on Saturday.

The Tigers have some spots to fill on the defensive line.

With plenty of playing time up for grabs this season, sophomore Jacquies Smith and redshirt freshman Aldon Smith have solidified themselves as two of the three members of the starting defensive end rotation, along with senior Brian Coulter.

Aside from their last names, and the buzz they've created among the coaching staff, there aren't many similarities between the two.

Way too much information? Sporting News interviewed Iowa State quarterback Austen Arnaud. He loves his mother's lasagna and wants to the play the piano.

Penn State transfer Phil Taylor has given the Bears high hopes for the season.

Briles knows that Taylor is the right person to help add to the buzz hovering around the Baylor football program.

"He’s got to have an impact," Briles said. "It’s a deal where it’s got to happen. He’s got to be a dominant force up front, and really that’s the thing we’re emphasizing across the board up front offensively and defensively."

Of the top three players at "H" inside receiver, Raider Adam James has been the most consistent during camp.

"He’s more motivated, more hungry," Riley said. "Something’s clicked with him to make him turn it on. He’s really clouded the picture up at ‘H.’ "

Riley said he doesn’t automatically think of Tramain Swindall as the starter, though it’s hard to picture it not unfolding that way. Last year, Swindall had 46 catches for 561 yards, James 15 for 159, and Cornelius Douglas redshirted.

Riley made the comments late Sunday after reviewing tape of that day’s workout in which James caught passes for 30, 38 and 21 yards during the daily 11-on-11 team scrimmage period.

"He’s playing like a different guy," Riley said. "I was extremely disappointed with how he played in the spring. In the spring, it was clear cut that Tramain and Cornelius were far and away the two best Hs. (James) has responded. We had a lot of talks with him, because we knew he had more in the tank."

Tech linebacker Blake Collier has not had an easy time the last two years. This year will be different.

Collier has suffered a torn hamstring, same leg, each of the last two seasons.

"It was frustrating at first," he said, "but then I just looked at it as time to get better, rebuild, get my body right, get more flexible.

"I think I got a lot stronger, so I think it was a good year. Everything happens for a reason. That was one of those things that you just have to find the good in it."

The 6-foot-2, 218-pound junior seems to have come back well from the two injury-plagued seasons. In the first week-plus of preseason practice, he’s been making plays on a daily basis, particularly in pass coverage.

Raider running back Baron Batch may return sooner than anticipated.