Bumped from the FanPosts, in case you missed this excellent first look from kriess. Check the recommended FanPosts in the right column for his first installment on the offense. --PB-- 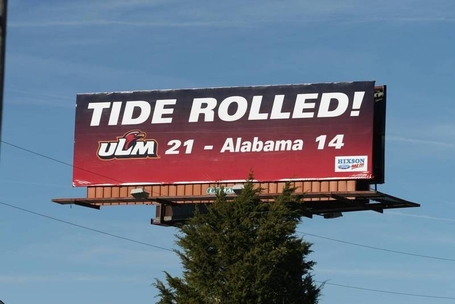 How did this happen? Where did the Defense of 2007 go?

After getting a fairly positive response from my Offensive preview of ULM, I decided to do some more research and put out a preview for the other side of the ball. Lets take a look at what Colt and Co. are going to be facing this Saturday.

In 2008, the Warhawk Defense was a complete let down from a very promising year in 2007.  It was so poor that in the offseason they decided to axe their complete Defensive system and start over from scratch.  Out goes DC's Phil Elmassian and Manny Michel, in comes ex New Mexico DC Troy Reffett. Out goes the 4-2-5 Nickel, and in comes Reffett's 3-3-5 Stack Alignment.

Their LB Corps looks to be their best unit on D, their secondary looks experienced yet they need to get healthy. The Defensive front for the Warhawks has the tools and skill sets, but do not seem to be productive enough to compete with their conference. Lets break down each starting position in the 3-3-5 stack and see what their possible tendencies are for Saturday.

THE DEFENSIVE LINE: Big Hawks up front--or not 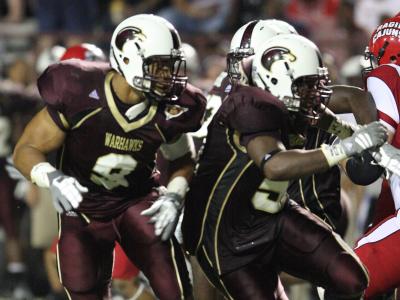 Yeah, not too much on size. But what they lack in stature, they make up for it in speed.

Their star on the line is DE Aaron Morgan(see above-#8-).. Morgan is a 2 time all Sunbelt DE and plays with a quick motor, which you should expect because his frame is built like a Flanker. Expect Morgan to go against the (much) bigger Ulatoski and try to use his speed to get to Colt.  Senior Jameson Jordan is the other DE.  Jameson doesn't have the motor that Morgan has and he doesn't seem to be a threat to rush the passer.  His inconsistent play will put a larger burden on the NT, Aaron Williams (not that AW). AW's main job is to clog up the lane and stuff the run, however his lack of hugeness will make that difficult.  Look for AW to draw double teams while the LB's fill the gaps against the run.  How effective thats going to be...well thats a different story. The lack of a pass rush by the D-Line is certain to fair worse than last years' squad.

With only 3 D-Linemen, expect ULM to rotate the reserves more than usual to get fresh legs out there against us. JUCO-transfer DE Quantez Hunter, a 6-4, 240 lbs playmaker will rotate with Morgan. 5-10, 285 lb Jr. Aaron Moore will rotate with AW and try to improve his 10 tackles and 1 sack from last year. And finally, 6-1, 243 lb Sophmore Troy Evans will back-up Jameson and is expected to be a roving DE (or Buck). Regardless of how many fresh legs they throw out there, they do not seem fit to be able to handle the run nor rush the passer, which is going to add much more pressure on their LB's duties.

THE ONLY DIAMOND IN THE SWAMP--The LB Corps. 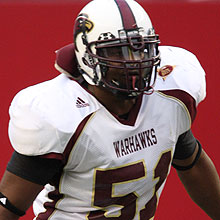 This kid is a stud.

The Rundown--Cardia Jackson is a playmaker. No doubt about it.  He has started all 3 years prior to 2009 and in that time he has notched 264 tackles and 19.5 tackles for loss.  Not only does he have good size for his position, his speed to the ball is second to none on his team.  His pass coverage skills have improved over the past 2 years as well, so expect him to be an impact on our game this Saturday. Josh Thomas, a former walk-on, brings experience to the table, but thats about it.  He is a poor tackler in the open field and by all means seems to have been bitten by the Bobino bug. Theo Smith gets his first shot at starting since the new DC moved from the base nickel D to the 3-3-5 stack.  While somewhat undersized, he makes up for it with excellent speed.  Look for him to try chasing down McGee into the secondary.

--Expect to see Hoskins on the field Saturday to get some quality PT.  The kid has a motor with a 4.5 40 and hits like a brick.  Along with Ford, he is ULM's future for their D. 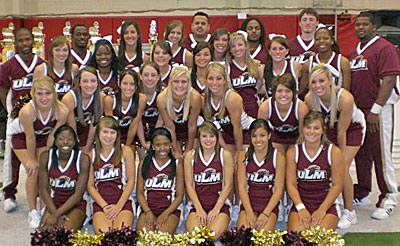 I said dinner, not dessert.  Think THEY would defend a "pass" by Colt?

The Rundown-- Greg James is an All Sunbelt Preseason 1st team Safety who is a ball hawk and a decent tackler.  Its not a good thing to have your secondary in the top 3 in tackles (Blake Gideon/Earl Thomas), however that happens when you run the stack Defense.  James needs to get out of the coach's doghouse and back into a leadership role for the secondary.  Thompson is pulling a Shipley and was granted a 6th year of eligibilty by NCAA this offseason, which means the Safeties are stout with playmakers.  Thompson, aged 31, is another All Conference Preseason DB that ULM will field. Truxillo will play Nickelback this year, however he is not a Leader of Men.  He's not likely to be a factor unless he remains healthy, which given the past 2 years is not a given.  The weakness of the secondary will be at both corners as neither Brown nor Stamps are proven ballers.  Both are ex-WR's yet they seem to not have the hands needed to become a lockdown corner.  Time will tell, and Im sure they will be tested early and often by Colt and hopefully Garrett.

Expect our offense to try and establish some sort of identity in the run game.  Obviously thats expected in EVERY game, however we can exploit this Defensive Line early and give Vondrell and our O-Line some confidence, which will be important further on in the season.  Also we're going praying to see Colt exploit the CB's with some deep sideline routes with Malcolm.  Malcolm has 4-6 inches over the CB's so thats a matchup we need to look at very closely.

When a team runs a 3-3-5 Stack Defense, all 3 units HAVE to work as a very cohesive unit, much more than you would expect out of a 4-3.  This team has the skilled players and the young energetic new Defensive Coordinator to reform their defensive attack, however they do not seem be able to gel as a complete working defense.  It seems that all 3 units work in their own little sewing circle and that they do not compliment each other.

Not that great of a video, but thats what happens when a Warhawk fan uses a Camcoder--Circa 1991

Check out my Offensive Preview of ULM here

Also, here is Huckleberry's take on Saturday's game from our friends over at BC.