Share All sharing options for: BON in Guantanamo Bay...

...in my last post, we discussed the connection (if any) between academic prestige and athletic success. One of the residing themes in the comments was how the overall prestige and "identity" of a school can be increased by athletic success. However, while athletics can definitely increase the stature of a school, there are other ways to promote and project what a school represents to the general public.

A few weeks ago, as part of my Army JAG Internship, I was provided with the opportunity to visit Guantanamo Bay. As part of our four-day visit, we were asked to bring a memento of our school to display at the base. In e-mailing several friends for advice, including the BON authors, I wanted to take something special. I wanted to leave something unique. In short, I wanted to bring something that would make the entire UT Community proud.

After the jump, I want to share with all of you the two items that I took to Guantanamo and provide some additional pictures from the trip. Feel free to skip the post, but I think many of you will be moved by at least one of the images, especially those who attended UT during the 9-11 attacks.

Seeking further advice, I contacted some UT administrators and told them about my visit. After some back-and-forth discussions, I wound up receiving an image that absolutely blew me away. I was sent a picture of the UT Tower on 9-14-01, which showed the giant US flag hung to honor the victims of 9-11. I turned this picture into a plaque, which included a handwritten explanation of the picture. 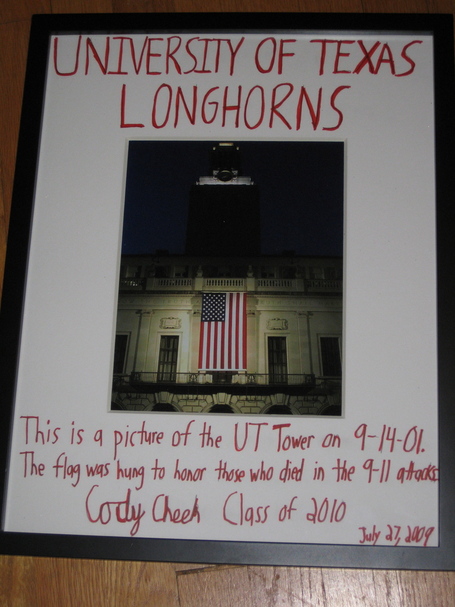 Additionally, I had to bring an image of the UT Tower from our 2005 National Championship season. Once again, the image was provided by UT officials and turned into a plaque. 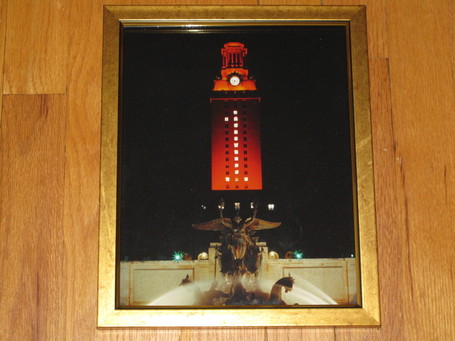