Bumped. If only because having the injury report as the top post for too long is just depressing. Happy Saturday all! --  40AS --

After that abortion of a post I made a couple days ago, I felt bad due to my lack of time and research that went into the preview.  I've spent the last week, save Saturday, at numerous dealerships trying to purchase a new truck and now it seems my life has slowed down enough to provide a thorough preview of the best team we've ever faced. The Cowboys of Wyoming.

The new truck is in the driveway, Clemson is losing on ESPN, and I've drank all my Ovaltine.  I'm ready to go! 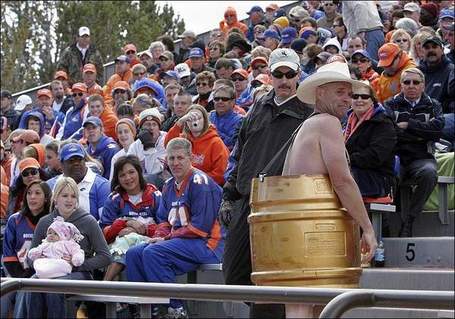 Wyoming's finest--courtesy of the Idaho Statesman.

Expectations for Wyoming's Defense will be the exact opposite from the offense.  The outlook is solid across the board and they have 2 shutdown DB's from Texas which have the potential to be very special in the MWC this year.  They return 8 starters from last years squad that ranked in the top 32 in total defense the past 3 years.  DC Marty English brings a 3-4 defense allowing the "Buck" LB to play on the line as a Kindle-esque pass rusher from the line.  Lets take a look at what Marty's defense did against Weber St. last week.

-DT John Fletcher--Sr, 6-6, 265 lbs.  The guy is a beast.  He is the heart and soul of this defense and already has 4 TFL and 2 sacks this year.  He was second team all MWC last year and most Cowboy fans are expecting to him have an even better season this year.  Injuries and lack of pass rush abilities are his downsides, however he's excellent at stuffing the run.

-NT Alex Stover--So, 6-3, 275 lbs.  Undersized and young, yet very promising and works with a quick motor.  Expect him to split time with the SR Fred Givens.

-DE Mitch Unrein--SR, 6-5, 275 lbs.  Aside from his strange last name, the kid never met expectations that the fan base placed upon him.  He's our Eddie Jones/ Tray Allen.  He had a decent year with 56 tkls, but he needs to get into the backfield more often to disrupt plays before they erupt.

---The Lowdown--
These guys can stop the run, but have poor pass rushing skills and we're not likely to see Colt on his back much this game.  Their Experience on the line will be a strength for them however and expect to see plenty of rotation at NT due to Alex Stover taking Trip Spa in the offseason, baby.  They must increase their production and appearances in the backfield, because placing 112th in TFL will just not cut it.  Grade = C+ 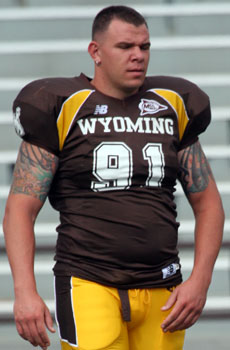 --The starting LB's all have 4-"men" names for their positions, for some reason.  Must be an aggy thing.  Buck, Sam, Buford, and Earl.  They tried to add in "Will" but Muschamp got wind of this treachery and skull-fu&^%ed Dave Christensen last year for even thinking it.  56-31.  Apparently Dave liked how it felt and decided to keep it.  I expect a double dose of reaming this week, promptly forcing Dave to change it to, oh I dont know..."Greg".

-"WILL" ILB, Brian Hendricks, (typical white boy name)--So, 6-1, 235 lbs. Brian will replace their leading tackler from last year, Ward Dobbs.  No one is expecting Brian to replicate what Ward had done in the past 3 seasons, however they do see alot of traits in Brian that made Ward a star.  Great motor and a very sure tackler.  What else do you need from a young LB?

-"SAM" ILB, Weston Johnson--Sr. 6-3, 235 lbs. Strongside LB will have himself a decent season once again.  With only 4 TFL last season expect DC Arroyo to use Johnson's speed to get more of a pass rush this season.  He has a very high football IQ and he makes great decisions on which holes to fill up, which I really don't think is a compliment.  But who am I to judge?

-"BUCK" OLB, Matt Barella--Sr, 6-2, 223 lbs.  More in the mold of a  safety than someone playing the Buck position, he will get manhandled due to his lack of size and experience.  Last year he mainly played on special teams and tallied 8 mere tackles the whole season.  Muckelroy pisses 8 tackles a day.  Expect Josh Bizeuns to rotate.

-"MIKE" OLB, Gabe Knapton--So, 6-3, 240 lbs.  Size and speed.  The kid has it all.  He's going to fill up your stat sheet and be an All-Conference player by the end of the season.  Of course we'll probably make him eat shit and die, but then again we're Texas.  Its not like we're Weber St, or Colorado.  My Lord, they are awful.

---The Lowdown---
All of the starters are all decent tacklers and they make smart decisions to clog up the lines, however don't expect much of a pass rush from them.  Hendricks is they guy we need to watch out for today, but don't be surprised to see Knapton to get in the mix as well.  I'll shit a brick if we see them in our backfield much of the game.  Also these guys are fairly poor in zone defense against the pass.  Lets see how Colt handles that.  Grade = C-

-CB Marcell Gipson--Jr. 5-10 185 lbs.  Kid from Dallas who has huge talent (go figure) and can be a lockdown corner in the MWC along with his brother who plays the other CB position.  While his size doesn't indicate it, he is a big hitter and will be trying to improve defensive takeaways, as they were very poor last year.

-CB Tashaun Gipson--So. 6-0 195 lbs.  Younger but bigger brother to Marcell, Taushaun is the better of the two with 10 broken up passes last year and notched 56 tackles.  He has great range and will be part of one of the best lockdown corner duos in the MWC this season.

-SS Shamiel Gary--Fr. 6-1 210 lbs.  Big hitter and has a nose for the ball.  Wyoming's true freshman sensation at Safety this year is this kid from Tulsa, OK.  Last game he notched 3 picks from Weber St. and had a couple PBU's.  He has great range and can really lay the wood.  Oklahoma seemed to pass up on a diamond in the rough with this kid.

-FS Chris Posinski--Jr. 6-1 210 lbs. Best tackler in the secondary as he notched close to 100 tackles last year which was 2nd on the team.  Never a good thing to have your secondary among the tops in tackles, however most of those came off blitzes.  The problem with his blitzing is that it leaves one of your LB's one-on-one with a receiver which is a mismatch from the get-go.  Expect Colt to take advantage with a quick read and throw a slant to a flexed out TE (Buckner) 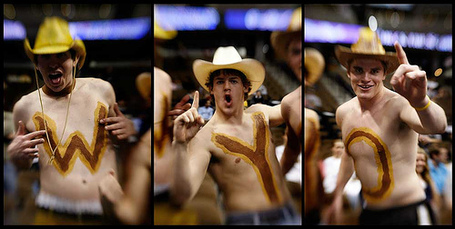 Look like "MING" was in the shitter when the picture was taken.  Are we playing A&M? .

---The Lowdown---
The brothers from Dallas are going to be special.  They have bred for football as all Texans are, yet they couldn't get into A&M so they went way north to be part of another Sheep Molesting College.  They should blossom so as long as they stay away from the Cheyenne Rodeo.  Got to stay away from those Bessie's romancing each other.  Anyways, the Secondary has plenty of experience and promise, but they HAVE to capitalize on mistakes, something out secondary could use as well. Grade = B+

I'm not impressed with their special teams except for Austin McCoy as the placekicker.  The kid has a leg and is very accurate.  Other than that, Monroe is going to run down their throats.

Wyoming Fan of the Year: 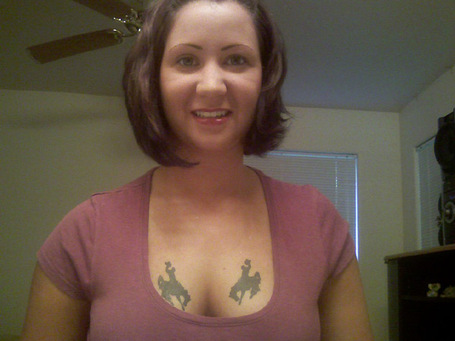 Oh, now that is just DEDICATION! What a trooper!