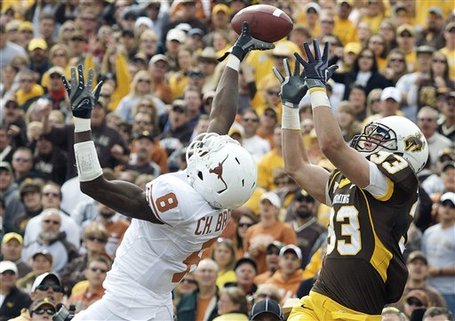 The Tech game is about making amends.

During quiet moments throughout the off-season, Texas defensive end Sergio Kindle frequently reflected on the one hiccup that derailed the Longhorns’ 2008 national title hopes.

"It would run across your mind," Kindle said after Saturday’s 41-10 victory over Wyoming. "But you’ve got to flush that out in a hurry. You don’t want to dwell on the past."

Colt McCoy isn't looking as sharp this season and the offensive line isn't living up to the preseason hype.

The Longhorn offensive line has not come close to living up to its advance billing. They had two holding calls that negated big first downs on third downs to help Texas convert only five of 17 of those situations. They are not winning in the trenches nearly consistently enough. Wyoming's defensive line harassed McCoy with four and occasionally a three-man rush.

"Tre did in the game what we see in practice," coach Mack Brown said. "He's earned the right to get more snaps. He has good hands, and every time we put him in, he makes yards."

McCoy loves having him in his backfield.

"He's a stud, he's a playmaker, and when he gets his chance to go in there he's going to play well," McCoy said.

But one of the recent trends for this Texas football team is a bit disturbing because, in this opinion, Sergio Kindle has yet to show up as a dominant presence as one of college football's premier playmakers. His next sack will be his first.

If you listen to the Longhorns coaching staff, on the other hand, Kindle has played as well as it hoped he would and, said defensive coordinator Will Muschamp, has been a "very disruptive player on the field." Muschamp also said Kindle graded out as the team's best defensive player of the game on Saturday.

The Aggies are a mystery team.

Texas A&M might have less buzz around its 1-0 record than any unbeaten team in the country.

Coach Mike Sherman saw his team produce an impressive 41-6 victory over New Mexico. But few outside those who attended the game at Kyle Field were excited about that because it was not on television.

Here's an indicator of the Aggies' early success after only one game. A&M and defending national champion Florida are the only teams nationally to rank among the top 20 in the four major team offensive statistical categories -- rushing offense, passing offense, total offense and scoring offense.

The Sooners are looking for that No. 2 receiver.

Two games in, the Sooners still seek a No. 2 receiver to complement Broyles in the post-Jermaine Gresham era. With Tulsa on deck and Miami in the hole, OU needs somebody to emerge, and quick.

"Ryan seemed to make all the big plays," coach Bob Stoops said. "We need more guys to step up and make plays."

The o-line is actually blocking now? Bob Stoops is pleased with the improvement in discipline and fundamentals.

After romping to a 64-0 win over Idaho State, the Sooners host Tulsa Saturday night. Stoops was encouraged the Sooners regrouped against the Bengals. OU drastically reduced its number of penalties and other mistakes.

"I thought they did a good job throughout the week," Stoops said. "I said it a couple of times that I thought we practiced well. Our guys worked really hard last week trying to make some corrections.

More questions about the Sooners.

What young players shined after the rain and lopsided score started sending fans to the exits?

It wasn’t a receiver. The easy pick is Miller, who thrilled the leftover fans with a pair of broken tackles on his impressive 36-yard touchdown run. But a pair of other true freshmen made a big impact. Defensive back Marcus Trice blocked a punt, and linebacker Ronnell Lewis tackled Idaho State running back Clint Knickrehm in the end zone for a safety. Hyped freshman defensive back Demontre Hurst didn’t make any big plays, but he looked good in coverage and made two tackles.

Oklahoma has been overrun by Cougars.

It’s a cougar world. And I’m not talking about the 40-year-old women who chase 25-year-old men.

When they’re successful, it’s a shocker, I’ll grant you. But not an upset on the scale of what we’ve seen the first two weeks of the college football season.

People are fickle. One day Bill Young is the defensive guru, today... not so much. But don't give up on the Cowboy defensive coordinator just yet.

A deeper look at Saturday’s game should give Cowboys fans hope.

Houston’s 45-point outburst had as much to do with lackluster play from OSU’s offense and bad penalties than it did with a poor defense.

The Cowboys are just moving on.

"We don’t ever accept losing, but we can’t just shut it down and quit. Now, what we’ve got to do is eliminate mistakes. And go from there. That’s where we need to start. And that’s got to start tomorrow."

The Big 12 could arguably be considered the nation’s most overrated conference after the first two weeks of the season -- at least at the supposed strength at the top. Texas slumbered through the first half of game against Wyoming, a team predicted to finish last in the Mountain West Conference. Oklahoma lost last week to Mountain West Conference team BYU. Oklahoma State lost to the Conference USA’s Houston. You can argue all you want, but the conference’s expected three power teams should have played better to live up to the conference’s immense preseason hype.

Another bowl for a Big 12 team?

The Big East and Big 12 conferences are in serious discussions to play in the new Yankee Bowl beginning in 2010, multiple sources told FanHouse.

The Big East would send its third or fourth selection to New York, while the Big 12 would likely send its seventh selection. The bowl game would be played at the new Yankee Stadium with a seating capacity of about 47,00

We have some winners. The conference picks their players of the week.

Jayhawk running back Jake Sharp is getting faster.

The fastest guy on the team has actually gotten faster, according to KU coach Mark Mangino, who relayed that information with a mildly surprised tone.

"Jake Sharp, believe it or not is quicker and faster than he was a year ago," Mangino said.

Nebraska will be tested when they play No. 13 Virginia Tech.

"Virginia Tech's going to be a good challenge to kind of gauge where we're at as a team," Asante said.

Of course, the players knew eight months ago that this game against the Hokies would be the most appropriate out-of-conference measuring stick. They managed to stay grounded for two weeks, a commendable feat in a sport known for its week-to-week parity.

Missouri got a slow start against Bowling Green. Gary Pinkel takes the rap.

"(The frustration) I had with our offense was the first half: 0 for 9 on third down, three 10- or 15-yard penallties, two turnovers. That was not good disciplined football. That’s what’s disturbing to me. That’s concentration, that’s focus, that’s coaching. That’s me. My disappointment was that it took midway through third quarter to get it back together. Lesson learned. It’s my job to get us ready. Obviously didn’t do a good job."

The Tigers' win may not have been pretty, but it was still a win.

"As Jaron told the team, 'Don't let anybody take the win from us,'" Pinkel said. "There are lessons to learn, there were lessons to learn last week, but it's a whole lot more fun fixing things with a victory. By the way, we're 2-0."

Soon enough, they'll hear about the struggles with the pass attack, a pass rush that was largely nonexistent, and the mistakes they'll have to eliminate.

Just like all the others? Raider quarterback Taylor Potts has the size to be NFL-ready.

He’s got the size — 6-foot-5, 215 pounds — and howitzer right arm to be coach Mike Leach’s most NFL-ready quarterback.

It turns out he’s got the mental toughness to boot.

That much was obvious when he erased last week’s three-interception performance by going 36-of-57 with 456 yards and seven touchdowns in a 55-10 rout of Rice Saturday at Jones AT&T Stadium.

He was one shy of tying the school record for passing touchdowns, which B.J. Symons set against Texas A&M in 2003.

Ready or not... It is time for the game.

And Baylor – yes, Baylor – could become one of the nice and interesting stories of the season by beating Connecticut.

The Bears already have a win at Wake Forest, which looks better after Stanford fell in Winston-Salem, N.C. They could open 2-0 for the first time since 2005. Then, Baylor was 3-0 by beating SMU, Samford and Army.