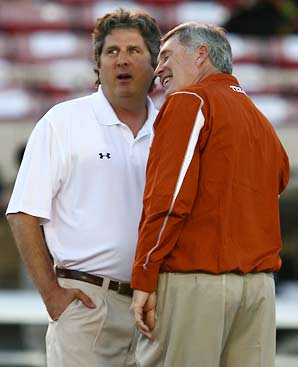 Mack Brown tells Colt McCoy to relax and have fun.

Mack Brown's message to Colt McCoy during a long talk Sunday was something the Texas coach felt needed to be said, simple as it was.

He told his Heisman candidate quarterback to relax and have fun, qualities he thought were lacking in Texas' first two games.

While saying that he "wouldn't trade Colt for anyone," Brown acknowledged that McCoy had been putting too much pressure on himself to begin games.

Is this the stupidest question ever? Remember that UT-Texas Tech game?

It's difficult to avoid one of the most painful plays in Longhorn football history.

The touchdown reception by Michael Crabtree was on a constant highlight loop during the 2008 bowl season. It's even a featured clip now for a national athletic apparel company.

We're just haunted by the memory.

"They got us," said McCoy, who again enters the game as a strong Heisman candidate. "The thing for me and the thing this team has taken away from that is, 'Hey, we should have taken care of business. We didn't. Let's move on and play.'

"Our focus is not on the past and last year. The focus is on this year and what we have to do to win."

It will be a shootout.

The second-ranked Longhorns were within one play of getting to the national championship game last year and have all of their major players back.

It should be a lot of fun to watch.

The Heisman Pundit checks in on the weekly watch. McCoy is in the No. 1 spot.

It was supposed to be the greatest season ever. It hasn't exactly worked out that way for the Cowboys.

Thus far, the Cowboys offense has spent more time shooting itself in the foot than blowing away opposing defenses with its balance and execution.

Junior running back Kendall Hunter has been corralled in the first two games and now is doubtful to play Saturday against Rice. Junior receiver Dez Bryant has made game-changing plays but hasn’t had more than seven touches in a game.

OSU is now one of Dr. Saturday's Profiles in Disillusionment.

Remember how Oklahoma State was one of the trendiest sleeper picks of the preseason? Remember how they shrugged off a series of high-profile disappointments to throttle then-13th-ranked Georgia in their season opener? Remember how they rocketed into the top five in the AP poll and were poised to make a real run at the Big 12 title?

No? Well, after the Cowboys' 10-point loss to unranked Houston on Saturday, apparently nobody in Stillwater does, either.

More inspiration from children. Mike Gundy got a life lesson from his son.

Oklahoma State coach Mike Gundy got a quick life lesson from his 4-year-old boy, Gage, on how to get over setbacks quickly.

Gage Gundy sliced his foot open Sunday night and received some stitches during a quick trip to the emergency room. His dad can only hope his team is as resilient as it overcomes its loss Saturday to Houston.

“Kids are resilient. I think they overcome things," Gundy said. "He's (Gage) walking around today, he's 4 years old and he doesn't know the difference. I think our guys are the same way.

Bob Stoops still will not give a timetable for Sam Bradford's return.

Asked Tuesday whether Bradford would be able to return this week or had resumed throwing, Stoops said he's "not even going to go there."

Tulsa wants to beat the Sooners.

"We have a tremendous amount of respect for coach (Bob) Stoops and the University of Oklahoma and their program," TU coach Todd Graham said Monday during his weekly press conference. "This is what our guys work for. These are the kind of games that our guys want to play in and why you work the way that you work."

Graham added that it's not just playing Oklahoma that excites his program.

"We're not going out to have a good showing," Graham said. "We're going out to win." The Golden Hurricane have posted impressive road wins at Tulane (37-13) and New Mexico (44-10) to open the season.

There are two different schools of thought as to the benefits of this scheduling idea.

Proponents say that playing a game early guarantees attention. And the television networks obviously are interested as the Texas-Texas Tech will be broadcast to a national television audience in prime time, along with a Game Day visit earlier in the day.

But others -- including most coaches -- wonder if pushing the conference race up several weeks will cause injuries and hurt teams by forcing them into a tougher game earlier in the schedule with lessened preparation time.

Just how bad are the bottom teams in the Big 12?

Nebraska will be ready for Virginia Tech.

When asked what he’d do special to help mentally prepare NU’s redshirt freshmen – like linebackers Will Compton and Sean Fisher – for Saturday’s road test at Virginia Tech, Pelini’s answer was, well, distinctly his own.

There are questions about Missouri's team.

How would Missouri replace six players who are now in the NFL? How would a young team fare in the spotlight?

And as quickly as the doubts arrived, a season-opening throttling of Illinois replaced the "hows" with "why nots?"

Why couldn't Missouri repeat as Big 12 North champs? Why couldn't Blaine Gabbert be the best of the Missouri quarterback bunch?

The Jayhawks running game has been a surprise this season.

It’s almost seemed like opposing teams have been willing to dare the Jayhawks to beat them with a ground game and an offensive line that were presumed to be question marks entering the season. Consider the dare answered after the first two weeks of the season, thanks to the potent one-two rushing attack of senior.

The Colorado players are standing behind coach Dan Hawkins.

“Everyone on the team believes in Coach Hawk and what he’s trying to accomplish,” said McKnight, who set a school record with 11 receptions. “He has set big goals for us. And we as players did not take care of the details. You go back to the penalties, missed assignments, Cody gets sacked, defensively giving up big plays …

“We have to go back and take care of business, and we have full faith in Coach Hawk and his coaching staff,” McKnight added. “They show us respect. We love them back. We’re going to get this thing done. We’re going to get it turned around. We will.” 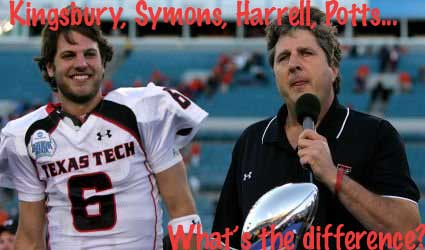 Taylor Potts looked good in the win over Rice.

The victory sets the stage for Saturday’s conference matchup between the Raiders (2-0) and the No. 2-ranked Longhorns, who are also 2-0 after beating Wyoming 41-10.

Asked if the lopsided win over Rice presented the kind of game he likes to see heading into the grudge match against UT, coach Mike Leach said: "It is what it is. It’s like Bob Dylan says: You are where you are.

"I just think that we need to take that second half and build on it."

Was Mike Leach worried about annoying the Longhorns when he brought his long snapper and a back up cornerback to the weekly press conference?

In any event, Leach declined to send his captains to the team’s weekly news conference on Monday, instead tapping deep snapper Austin Burns and backup cornerback Taylor Charbonnet.

The usual Monday spokesmen are quarterback Taylor Potts and guard Brandon Carter for the offense and cornerback Jamar Wall and end Ra’Jon Henley for the defense.

Double T Nation has key matchups for the game.