Share All sharing options for: Five Things to Watch Against Texas Tech

Will the Longhorns commit fewer penalties? In his Monday press conference, Mack Brown didn't waste much time before bringing up the issue of penalties and the MWC officiating crew that did the game against Wyoming. In fact, it was the first thing he mentioned after talking about the impact of the altitude on the players (emphasis mine):

It was a Mountain West crew, so you have to take into account that you are working with officials that don't normally do your games. Some things came up that are probably officiated differently here, but at the same time, we need to go back and do a better job of not having penalties because we have had them for two weeks and a game this weekend that will be a much more difficult game, you can't have a lot of penalties to stop what you're doing.

Yes, the officials don't normally do Texas games. Apparently, they haven't even heard of Vince Young, the last guy who will ever wear the no. 10 uniform for the Longhorns -- the crew announced a holding call on no. 5, Ben Wells, as a holding call on Vince Young. A penalty in absentee.

The color guy on Versus after the call: "Mack Brown says I don't even have that guy on my team."

Indeed. Not any more. Unfortunately, that guy's football career ending a couple years ago after winning the national frickin' championship. On the final play. Which was a fourth down. Ending arguably the greatest college football game ever played. So yeah, like I said, there's a reason the penalty couldn't have been on no. 10 -- no one will ever wear it again at Texas. So, fine officials of the MWC, maybe you've heard of him.

That's not even to mention the unsportsmanlike penalty on Chykie Brown for doing something Longhorn defensive backs have done just about every time they've broken up a pass in the last several years. Upwards of 20 for sure, I might even guess closer to 30 times. The fine officials from the MWC just aren't having that kind of nonsense, even though Brown did the gesture towards the Texas sideline and away from his opponent.

Will the "You Can't See" hand gesture return this season? Maybe Mack needs to go check with the crew on Saturday before the game about it. Or maybe the defensive backs just need to give a rest, because, you know the fine officials of the MWC put their stamp of disapproval on it.

This lengthy digression (call it a rant if you must) is meant to reach the ultimate truth that the Longhorns did hurt themselves a great deal with penalties during the game that any good officiating crew should make. The holding calls on the Longhorns were certainly holds in most of football. In the Big 12?

Well, Brian Orakpo might disagree, but they were dumb holds. 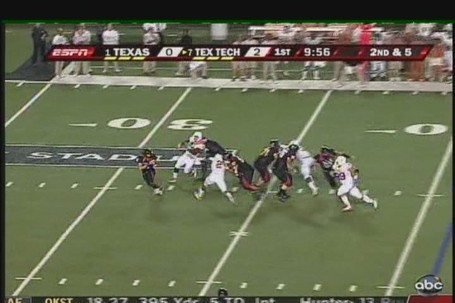 Then there were false starts and offsides on experienced members of the offensive and defensive lines, including one on Chris Hall. Yes, the center. Two of those holding calls brought back first downs. Point being, the Longhorns can't afford to commit those penalties in a more closely-matched game.

How much does Colt McCoy run? Last season in Lubbock, Colt McCoy was beat up, with bruises all over his body acquired throughout the season, particularly during the three tough games directly preceding the trip to the Llano Escatado. This season, Mack Brown and staff wanted to avoid calling running plays for their quarterback throughout the first two games, mostly succeeding after only calling three running plays for McCoy against Wyoming. McCoy's struggles during most of 2007 put in stark relief just how much better the Texas offense is when McCoy runs the ball effectively -- after he came out of the game for one play against Nebraska, everything seemed to click into place for him running the zone read with Jamaal Charles, the offense took off, and has hardly looked back since.

Brown understands the need to run McCoy as well as anyone ($):

One of the major stories this week has been the conversation that Mack Brown had with McCoy after the Wyoming game about having more fun, relaxing, and not pressing so much early in games. McCoy acknowledged to Chip Brown that running the ball may help him establish a rhythm early on and better integrate him into the flow of the game:

I do feel a little bit more in control of the game when I run a little bit because it helps our offense and we're moving the chains.

Look for the Longhorns to call more zone reads and several quarterback draws during the game to help take pressure off of the running backs and keep the Texas Tech defense honest. Texas Tech may be surprised at just how difficult it is to stop a healthy, fresh Colt McCoy running the football.

How much does Tre' Newton play? Throughout each of the first two games, redshirt freshman running back Tre' Newton has been a bright spot for the Texas running game, particularly against Wyoming, gashing the Cowboys in the second half and hitting his holes decisively and at speed. However, the concern is that Newton did his damage against two overmatched teams in the second half when they were all but worn down. Can he remain as effective if he plays in the first half against Texas Tech?

It's certainly a legitimate question, but this may be the week to find out. Vondrell McGee tweaked his ankle last week and practiced, but won't be at full speed on Saturday and neither will Fozzy Whittaker, who is practicing but still recovering from his knee problem. Despite a dropped pass, Newton seems to have the trust of the coaching staff:

He's just a guy that does what he's supposed to every day. I think he's 195 pounds, he's bigger than people think he is and the things that he brings to the table is that he gets from here to there real fast, and he's got very good vision, so he's got great patience. I don't know how fast he is if people just time him in the 40, but his football time's really fast.

Newton threw an excellent block on the draw play for McCoy Texas ran last week and it's a play that the Longhorns will probably use once or twice this week and Newton will probably be the lead blocker on the play. With his ability as a receiver, he will also probably see the field when the Longhorns get in their "jet" tempo, one of the major bright spots offensively through the first two weeks. Texas Tech doesn't have a particularly deep defensive line, so tiring them out early could help Texas immensely in the second half. Newton also blocked well downfield as a receiver, throwing a key block to spring Dan Buckner's touchdown catch and run that effectively put the game out of reach.

If Newton does find the end zone, fans certainly don't have to worry about him picking up any taunting penalties. After the Southlake Carroll product scored his first career touchdown, he tossed the ball to the official and headed straight for the sidelines. Mack Brown said his teammates gave him some grief about that during the week:

He's a very settled kid, and he's been this way since he's been here. He's very smart, he makes great grades, he's a guy that never says anything and he smiles. I think the players were kidding with him after the touchdown the other day, because he ran to the official and handed him the ball and they were making fun of him for not celebrating, and he said, "I'm supposed to give the ball to the official. That's what I'm told."

Too true, Tre'. But here's a hint though, for the next time: Toss that ball to the official quickly, by all means, but pause a second and give some love to the big uglies who cleared the way for you. You might need their help again.

How much pressure can Texas put on the quarterback? First of all, people need to chill out about Sergio Kindle. He's not hurt, he's not slow, he's not a disappointment. He hasn't played nearly as much as he will throughout the conference season as Muschamp has worked to bulid depth through the first two games. He hasn't been deployed as he will against Texas Tech because Muschamp doesn't have any desire to reveal the more exotic elements of his defensive schemes.

All that will change this week. Kindle will be moving from gap to gap before the snap this week and will get pressure on Taylor Potts, just like he got pressure on Robert Benjamin early last week. In fact, Kindle played so well against Wyoming that Muschamp graded him as the top defensive performer on the team, even above Lamarr Houston, who won the Big 12 Defensive Player of the Week award. When the play went away from Kindle, he did an excellent job of playing contain and keeping the mobile quarterback in the pocket. He's doing what Muschamp wants him to do so far.

Kindle is only part of the equation in terms of getting pressure on the quarterback. If Texas Tech doesn't keep the defensive interior honest by running the ball some or throwing some screens to the running back, Lamarr Houston, and possibly Sam Acho at an interior position, will start shooting gaps into the backfield. Alex Okafor will also have a chance to play at the Buck position, as will Emmanuel Acho when he's on the field. The sack numbers will probably not be gaudy, as Potts gets rid of the ball quickly like every Tech quarterback, but the Longhorns should be able to pressure him into some quick throws.

Just how much has the secondary grown? It's understandable that Blake Gideon and Earl Thomas have received a lot of attention this week, for reasons that don't even merit much discussion at this point. Though they have said all the right things, it's hard to believe that this is just like any other game for them. The question is how much they have really improved. Thomas has almost picked off several passes this season, including one late against Wyoming that should have gone back for a touchdown. Gideon dropped another interception against Wyoming as well on a play that could have found the end zone had he held onto the football. Whether they will come up with those plays against Tech remains to be seen, but they will put themselves in a better position to make plays than last year.

While Thomas and Gideon have gotten all the attention, the play of Aaron Williams and Curtis and Chykie Brown will be just as important. Williams will have the task of occasionally rushing from his nickel spot and blowing up screen passes, something Deon Beasley did extremely poorly last year. Besides Thomas, Williams appears to have the most playmaking ability in the secondary, standing up the Wyoming running back last week before ripping the ball out, a truly beautiful play. Even Curtis Brown laid the wood last week, destroying an intended receiver on a screen pass. Last season, Chykie Brown didn't even play against Tech with his ankle sprain.

Thomas and Gideon have the most demons to exorcise in front of the entire country on Saturday night, but the rest of the secondary will have just as much of an impact on whether the Longhorns win the game or not. And if the early season is any indication, they're ready.