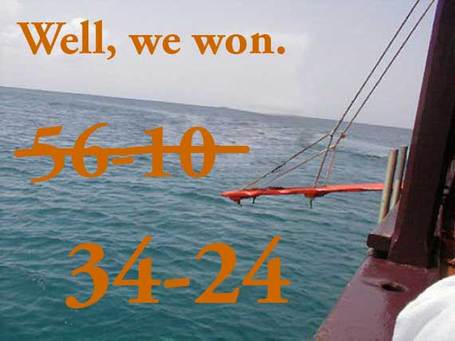 We got revenge? The Austin American-Statesman thinks so.

Texas fans will call it revenge. The Longhorns were more likely to describe it as relief.

Colt McCoy threw a 3-yard touchdown pass to Dan Buckner in the fourth quarter that gave the Longhorns some room and No. 2 Texas beat feisty Texas Tech and their prolific new passer 34-24 Saturday night.

"I'm proud of the way they grew up tonight," said Longhorns coach Mack Brown, "of the way we worked and fought and hit."

The Longhorns accounted for three turnovers — Muschamp's goal each week — held Tech to a minus-6 yards rushing and limited the visitors to an effective three third-down conversions in 13 attempts. Texas held the high-scoring Red Raiders to just a field goal until midway through the third quarter.

No single play was bigger than defensive end Sergio Kindle's crushing blow that separated Potts from the ball early in the fourth quarter. Sam Acho recovered the fumble to set up the Texas offense for an easy score six plays later for a two-touchdown lead.

"Sergio blasted him," Acho said, "but that's kind of his M.O. We were just all over him."

Hallelujah. A running back has emerged.

For the first time since Jamaal Charles bolted for the pros, the Longhorns have a running back who can do everything pretty well. Redshirt freshman Tre' Newton is ready to carry this load. He finishes runs. He blocks when asked. And he holds on to the ball.

If only the coaches will allow it to happen.

And we have found a tight end. Granted he is not a typical tight end.

Tight end is not a problem. It's an asset.

Because Dan Buckner has arrived.

OK, so he's not playing a typical tight end spot.

Buckner caught six catches for 75 yards and a touchdown.

We just don't get Mike Leach.

So America will see that Texas won by just 10 points, and maybe America finally will get it.

America almost never gets it where Mike Leach is concerned, but maybe now America will. He has to earn his respect every year, and when he does it one year, he has to do it all over again the next year.

No other coach in college football is better. Leach complains about being overlooked, but he may secretly love it.

Even as he rolls out another new version of college football’s best offense, even as he plugs in new players and keeps rolling, he loves the underdog role.

Mike Leach was happy with his team's defensive effort.

“Our defense really played well the whole game,’’ said Tech coach Mike Leach, whose team dropped to 2-1. “I thought our defense had a very courageous effort. They were playing very fast.’’

The Raider offense wasn't too bad, either.

But quarterback Taylor Potts and his talented group of receivers might have done a lot of growing up before a packed house at Texas-Memorial Stadium, at least giving the Red Raiders a chance by recovering from the slowest of starts.

The Red Raider coach was not happy with the officials.

On the final play of the first half, Tech quarterback Taylor Potts pretended to take a knee before dropping back for a pass. Replays showed Potts' knee never touched the turf, but the officials blew the play dead.

"We never took the knee, and they whistled it down," Leach told ABC as he left the field.

Tech certainly was not desperate, but Leach elected to surprise Texas with the onside kick. Longhorn Ryan Roberson recovered the ball.

"We almost got it," Leach said. "We probably should have."

Then came another bold move in the fourth quarter. Leach, with his team trailing 34-24 on what turned out to be its last possession, called a running play on third and nine at the Texas 47.

The Red Raiders ran the ball effectively last season. They have not run much, or particularly well, in this season.

Thayer Evans writes about our game with Tech.

Yet Texas disappointed early before coming alive in the second half and holding off pesky Texas Tech for a 34-24 victory in front of a crowd of 101,297 at Darrell K Royal-Texas Memorial Stadium in a sloppy start to Big 12 Conference play this season. McCoy, last year’s runner-up for the Heisman, threw for 205 yards and a touchdown, but he also had two interceptions that came on tipped passes. After the game, John Bianco, Texas’ assistant athletic director of media relations, said that McCoy missed practice Tuesday and was battling the flu.

The Rose Bowl staff was at the game.

Some autograph requests can also be bizarre: McCoy has signed a young fan’s forehead and babies’ diapers. When a woman asks him to sign the chest of her shirt, he opts for her shoulder.

"It’s just crazy that you run into people like that," McCoy said.