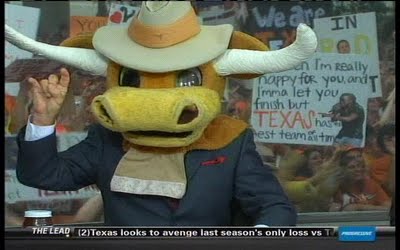 The Horns are finding ways to win.

V for vendetta? No, just W for a win, which is all Texas needed now. Style points can wait until November.

Mack Brown surveyed the overturned bandwagons on the road to Pasadena, the ones with the logos of Southern California and BYU, and decided being unbeaten was good enough.

"It's not playoffs. It's not anything else. It's survival," Brown said. "We didn't survive for one half last year and got disappointed.

Dan Buckner is turning into a huge threat.

Their latest worry is Dan Buckner, who has emerged as a big target for the Longhorns with two touchdowns in the last two weeks. His fourth-quarter touchdown against Texas Tech helped put the game away in a 34-24 victory over the weekend.

At 6-foot-4, 220 pounds, Buckner has moved from wide receiver to what Texas calls its "flex" position lined up closer the ball. Shipley occupied a similar spot last season and caught 89 passes for 1,060 yards.

The move means Buckner is often matched up against linebackers or safeties instead of speedy cornerbacks. He's got the speed to outrun linebackers, the height to outjump safeties and the strength to break tackles.

"We took advantage of that in the second half" against Texas Tech, McCoy said. "I kind of felt like Dan was going to have a big game."

Muschamp is happy with the defense.

Will Muschamp, still drenched with sweat after a near four-hour game, was giddy Saturday night after Texas' 34-24 victory over Texas Tech.

He even told a joke — one only another defensive coordinator would get — when he spoke to the media moments after the Longhorns had clinched their first Big 12 Conference game of the season.

Muschamp was delighted because he one-upped Tech coach Mike Leach, who is known for designing a near unstoppable passing offense. The 24 points, including no touchdowns in the first half, were the fewest points Texas had allowed the Red Raiders since 2005.

I guess we should rename this the jet offense? The Horns have their own brand of hurry-up offense.

"We just had to keep fighting as a team. It was a tough first half. Not everything is going to go our way every time," said McCoy, last season's runner-up for the Heisman Trophy.

Texas has long used a no-huddle offense, and McCoy usually runs it to near perfection. The jet tempo is an extra gear and can make life hard on the chain crews trying to keep up with down and distance and defenders trying to catch their breath.

Kirk Bohls has his opinion on the Tech game.

Beg to differ with those who want to discredit the Texas defense for allowing so many passing yards Saturday night. I came away thoroughly impressed with Texas Tech on both sides of the ball but especially quarterback Taylor Potts. They don't come any tougher. Why is it so wrong to give the other team some credit? Betting here that the Red Raiders lose only two more games and go 9-3 this season.

Neither No. 1 Florida nor No. 2 Texas appears that it is going to treat the season the way Secretariat did the Belmont, but each has set the pace to win the two slots in the national championship game. And the Gators and the Longhorns can thank the franchise quarterbacks Tim Tebow and Colt McCoy for separating them from a seemingly middling pack.

Congratulations. Roddrick Muckelroy is the Big 12 Defensive Player of the Week.

Note to Colt: Defensive back Clarence Ward likes to intercept passes on the road.

Don't get too excited about Aggie football just yet. Their first two opponents have a combined record of 0-5.

Still, unbeaten A&M's first two opponents are now a combined 0-5. This week's foe, Alabama-Birmingham, isn't as bad as UNM, but a victory over winless Rice and losses to Southern Methodist and Troy hardly qualify the Blazers as a quality team.

Oh, no. Distress in Stillwater.

Because of the money invested now in Cowboy football, because the preseason expectations were so great, because season-ticket sales are at an unprecedented level and because OSU is blessed with a rare collection of skill-position talent, anything shy of a 10-win season could be categorized as a bust.

Based on what was seen in the Houston and Rice games, it's not difficult to envision a four- or five-loss finish for an OSU team that a few days ago was No. 5 in the country.

The only positive resulting from Saturday's 41-24 win over Rice was that the Cowboys improved to 2-1. Rallying from a 28-3 deficit, the Owls outgained OSU 281 yards to 139 during the second half.

When time expired, a huge red flag should have been raised over Boone Pickens Stadium.

There is a downside to having one of the best kick and punt return teams in the country.

During the last two games, Houston and Rice both repeatedly kicked away from Cox to keep the ball out of his hands.

Congratulations to Landry Jones. Jones is the Big 12 Player of the Week.

Stoops said Jones' teammates have rallied around him in Bradford's absence — none more than Ryan Broyles. The sophomore caught 11 balls for 128 yards and three TDs against Tulsa. His seven TD catches in three games is one more than he had last season.

"Ryan is a very explosive player and good for a lot of big plays, and he's making more and more of them this year," Stoops said. "Landry sure knows where he's at out there."

How good is OU’s defense, and how much better can they get?

In short, really good. The Sooners rank No. 1 in college football in rush defense. They also lead the scoring defense category by two full points per game after notching back-to-back shutouts for the first time since 1987, Barry Switzer’s next-to-last season.

"We had that bite-down mentality,” said sophomore linebacker Travis Lewis. "We would like to think that when our back’s against the wall that we’re going to make a play.”

Brandon Caleb is working his way into the No. 2 receiver spot.

The Sooners are back in the top 10.

If the Sooners beat Miami, they think they might be back in the title race.

"Miami is really good,” said Jones, who tossed a school-record six touchdown passes Saturday. "But it’s also a chance for us to redeem ourselves.”

And perhaps before a national TV audience with plenty of voters tuned in.

Along with USC-California, scheduled to be the ABC primetime game, OU-Miami will be the co-matchup of the day. Especially if the Hurricanes take down Virginia Tech in Blacksburg, Va., this Saturday.

Mike Balgoun will not play this season.

"They're probably going to put (us) in the situation that Blaine Gabbert's going to have to beat (them)," Mizzou offensive coordinator Dave Yost surmised, adding, "'Can you beat us throwing the football? Because we're coming after you.'"

That's probably OK by MU, considering what Gabbert has flashed and how he has evolved already.

We feel your pain. The Jayhawks have a slow start this season.

For those members of the Kansas University football faithful who struggle with the early 11 a.m. kickoffs — and there seem to be plenty who do — the team inadvertently might have provided a slight reprieve: Based on the happenings of the season’s first three games, fans can feel free to sleep through the first 30 minutes without missing too much.

Mark Mangino does not want any comparisons to his 2007 team.

"I don't now how many games this team will win," Mangino said."This team has a completely different personality than the 2007 team. ... That 2007 team had a little bit more maturity. If you eliminate (Todd) Reesing, (Kerry) Meier and (Darrell) Stuckey and (Jake) Sharp from the equation, it's really not a mature football team. Those four guys kind of lead it and pull it along, where we had a bunch more guys, leadership guys, especially on defense (in 2007)."

Colorado has gone to a no-huddle offense.

The Colorado Buffaloes reunited with an old friend Saturday in a victory over Wyoming at Folsom Field.

In an effort to make slow starts on offense a thing of the past, CU turned to the no-huddle offense it used at times last season, and in the second half of the Toledo game in Week 2, to build some early momentum.

Is Mike Leach the best coach in America?

Baylor cornerback Antareis Bryan is out for six to eight weeks.

How do economists look at sports injuries?

Sport is not a conventional business (Barnwell says that getting to the playoffs can cost a team more than they earn from it) but an NFL team’s raison d’être is to win, and one of the biggest constraints they face is the salary cap. In this context, the $14m spent on Brady represents a massive opportunity cost – a cost made painfully clear by his season on the sidelines as he convalesced. With so much at stake in the big money world of professional sport, the questions become more urgent. Do teams and their owners understand the economics of injury? How are ­decisions surrounding sports injury made? And is that changing?

And the survey says... No one is better than the SEC.

Early losses by Oklahoma and Oklahoma State have knocked the Big 12 from atop the perch, making the SEC the nation’s toughest conference by default. I say this because we really don’t know how good the SEC is until the conference schedule begins. \With the exception of Alabama’s victory against Virginia Tech, none of the SEC’s heavyweights (Florida, LSU, Ole Miss) has been tested. Until then, we won’t know if it deserves to have four teams ranked in the top 10. The Big 12 may very well recover once the Sooners’ Heisman Trophy-winning quarterback, Sam Bradford, regains his health and if the Cowboys shake off an embarrassing loss to Houston. But for now, the SEC sits in a class of its own. – Sun Sentinel

Is there a double standard for Ohio State?

Still, I don't see much of a difference here. So why the shuffle in the polls?

Thanks to the Horns and the Raiders, ABC won the ratings war on Saturday night.