Thanks to Bret Bloomquist, sports writer for the El Paso Times and UT grad, for the preview of the Miners.

Last year the Miners offensive line averaged 406.5 yards and 32.9  points per game. Do you expect the same type of output from the four  returning starters? Discuss the line personnel. Who will replace center Robby Felix, who left for the NFL?

UTEP is experienced all through their two-deep on the line. They were mauled by Kansas but excellent in the other two games. They are certainly good for Conference USA, though I imagine Texas will see better on a regular basis in the Big 12 South. Center is the only position they had to replace last year and the new guy is Tanner Cullumber, who did start the final two games last year after Felix had his stroke. The guards are Cameron Raschke and Rod Huntley, the tackles Will Osolinsky and Mike Aguayo. Most of the backups started at one time or another last season when they had injuries.

Trevor Vittatoe has achieved outstanding numbers as a freshman and as a sophomore - 6,375 yards passing, 58 touchdowns and 16 interceptions. What are his strengths as the team leader? Where does Vittatoe need to improve?

He is exceptionally calm and takes great care of the ball. He held it a little long against Kansas, probably because he wasn't used to seeing receivers so well-covered. He also needs a bit more touch, particularly on short passes. But he has an NFL body and arm and consistently makes good decisions. He's a good guy to have in a close, late game because of his poise.

Jeff Moturi and Kris Adams are Vittatoe's main receiving weapons. What makes those two so effective? Who are the other receivers?

Adams is tall and Moturi is fast. Moturi's also a good route runner. When they get open -- and it's hard to double both of them -- Vittatoe is good at spotting them. Adams might have a shot at the next level, though he needs to put on weight. Evan Davis and Tufick Shadrawy are the next two guys. Like most Price receivers, they have good size.

In 2008, it seemed as if the Miners used a committee approach to the running game. Is there a go-to back/s this year?

Donald Buckram has suddenly emerged this year after they assumed it would be by committee again. They will use three tailbacks but Buckram is now a clear No. 1. This will be my story for Wednesday's paper. He ran better against New Mexico State than he has in his career here.

Strengths are the line, quarterback and receiver. That line, though, looked a lot better against MAC and WAC competition than it did against a Big 12 team. UTEP hasn't shown much explosiveness yet this year, which is supposed to be a team strength and probably will be down the road. The offense will be one of the best in Conference USA but they may not be big enough up front to handle Texas.

UTEP has a veteran group of defensive linemen heading into the 2009 season, a unit that produced 23 sacks last year. Who are the personnel on the line?

It's a revolving door, though Aaron King is off to a good start at end after getting a late start last year (wasn't even on campus until the second week of the season). An inability to find good linemen is part of the reason they went to a 3-3-5. Steve Riddick is having a good year at noseguard and Robert Soleyjacks is the other end. They will rotate in three groups. They are undersized but do have some quickness.

Linebackers Adam Vincent and Nu'uese Punimata were solid performers last year. Who will replace those two this year? Who is the projected starter on the right side?

Anthony Morrow is the right side starter. The middle linebacker, Jeremy Springer, was a quarterback until this spring and hasn't played defense since seventh grade. That he is now starting in his first season on defense says something about both him in a positive way and the quality at linebacker in a negative way. But he has played well and should get better. His twin brother is the staring middle linebacker at Kansas. Royzell Smith started last year as a freshman and is the other starter. Linebacker and defensive line are the biggest questions on the team but they have been pretty solid this year. 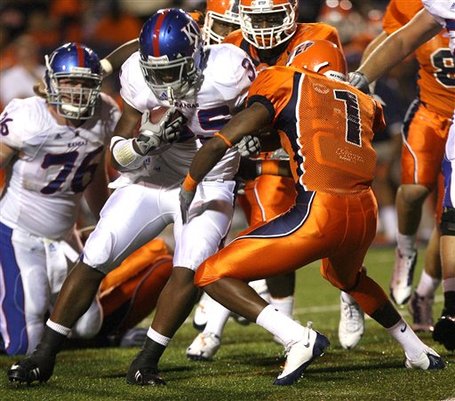 UTEP coach Jim Clark was disappointed with the safety play last season. Has there been improvement in the first three games of this season? There is an experienced cornerback rotation this year. Have they lived up to the preseason expectations?

Massive, massive improvement, which will be my Friday story. That unit had two interceptions last week. Braxton Amy, one of UTEP's best players, missed last season to injury but is now back and as good as ever. Da'Mon Cromartie-Smith is the national co-leader in tackles. Clarence Ward (there are three safeties in the 3-3-5) had an interception last week. All the backups are new from last year and all are playing well. The cornerbacks are also much improved. Cornelius Brown and Melvin Stephenson are having good years. The secondary as a whole is vastly, vastly better than last year.

Strengths are the backs, particularly safety and an increased familiarity with their second-year system. It can be a confusing system for offenses because it's such an uncommon defense. The front six are undersized and there are no real NFL prospects on it. The defense is much better than when it ranked 115th nationally last year but still has a ways to go.

What are the key match ups for this game?

Obviously UTEP doesn't match up on paper on the two lines. For them to have any chance Aaron King will have to have a huge game against much more touted offensive tackles. I'm interested to see if Brown and/or Stephenson can cover Jordan Shipley. That should give a feel for just how improved they are.

What else should we know about the Miners?

UTEP hasn't give up a first-quarter touchdown this year and also shut out Texas in the first quarter last season. They have been terrible in second quarters this year. They rank 117th nationally in both penalties and penalty yardage per game, but on the plus side they are tied for 12th in turnover margin.