Snap Shots: 3rd and 8 Against Tech

Share All sharing options for: Snap Shots: 3rd and 8 Against Tech

After the first three games, one thing is clearly apparent about the offense -- it's not operating at the same high level it was last season, prompting Mack Brown to call it a "work in progress." There are several factors that have contributed to the sub-par pay -- spotty pass protection and run blocking by the offensive line, decreased accuracy by Colt McCoy, his over reliance on Jordan Shipley, and, relatedly, McCoy not properly going through his reads. The following play opening the fourth quarter against Texas Tech perfectly illustrates the last two problems -- McCoy's over reliance on Shipley and his poor job going through his reads.

Texas opens the fourth quarter up by a touchdown with a critical 3rd and 8 just inside Texas Tech territory on a promising drive highlighted by consecutive completions to Dan Buckner totaling 30 yards. A Tre' Newton carry on first down netted four yards, but Texas Tech blew up the subsequent speed option play (it's hard to see how because the Longhorns quick snap the ball and the cameras don't catch the critical first second of the play) on second down, forcing McCoy to pitch early and resulting in a loss of two yards by Newton -- the play hasn't worked well the last several weeks, in large part because McCoy isn't attacking the line of scrimmage quickly enough and/or the blocking hasn't been good for the play. McCoy and the line have to start executing better on the play or it's not worth running because of the potential to lose yardage and put the offense behind schedule, something it can't afford as much this season. The failed second down play leaves the Longhorns in a third and long situation.

The Play in Pictures

The Longhorns open in a five-wide receiver set, but it's difficult to tell the exact personnel. Marquise Goodwin is at the top of the screen next to Jordan Shipley, with Dan Buckner in the flex and James Kirkendoll in the slot. It looks like Tre' Newton or DJ Monroe may be split wide to the bottom of the screen. Texas Tech has only three down linemen, two linebackers and six defensive backs and is playing with two safeties deep. Notice that Jordan Shipley is matched up against linebacker Marlon Williams, a mismatch that Colt McCoy surely notices immediately, meaning that he probably makes up his mind about where is going with the football before the play even begins.

The two receivers at the bottom of the screen both apparently run go routes (they exit the screen shortly) to clear out the bottom side of the field for the crossing route Jordan Shipley is about to run. Notice that Williams seems to anticipate the crossing route by Shipley and I'm willing to bet that's because the Longorns ran this exact same play 10-20 times last season and often with great success. Shipley stutter steps to try to freeze Williams, but the linebacker isn't going to give him an easy inside release. Notice also that Dan Buckner is turning inside to run a post route to occupy both the left safety and the cornerback. The cornerback at the top of the screen is about to hand off Goodwin to the safety on that side of the field. It's difficult to tell exactly where McCoy is looking, but judging by his likely pre-snap read and the direction of his helmet, he's staring down Shipley the whole way and ignoring his other two reads on the play: first, Buckner on the post and, second, Goodwin on his go route. (Note: I'm not 100% sure of the order of Colt's reads, but considering the depth of the routes, Buckner first and then Goodwin second makes the most sense to me.)

Just as the cornerback covering Dan Buckner jams him, essentially conceding a clean release inside by Buckner on the post and relying on help coverage from the left safety over the top, McCoy sees Shipley about to gain a step on the flat-footed linebacker. If McCoy looks deep, the right safety will either start into his backpedal to try to keep up with an international track star (hint: it won't work well) and McCoy will have a brief window of opportunity to thread the ball into Buckner or the safety will bite on the post and leave Goodwin completely free. Either way, Goodwin will be open -- he's not even with the safety yet, but he's sure as hell leavin'. Backpedalling is not a good way to keep up with international track stars. McCoy has an opportunity to look down the field, as an offensive lineman is about to make a nice tackle on a Tech defender to keep the pocket clear for the quarterback. 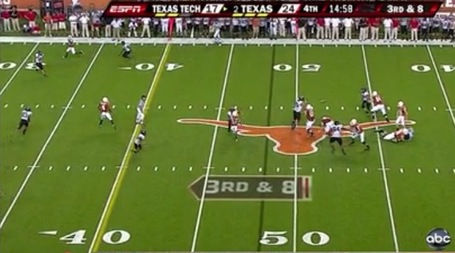 The cornerback covering Dan Buckner, apparently reading McCoy's eyes all the way, leaves his man to jump the underneath crossing route. The left safety, recognizing that neither of the receivers running go routes to the bottom of the formation are threats, heads to cover Buckner on the post, while the right safety begins to backpedal to cover Goodwin. 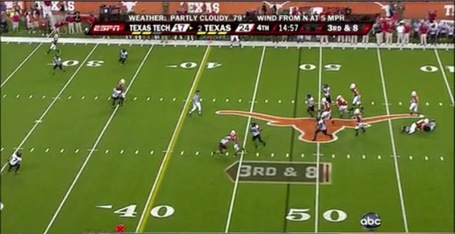 Shipley never has a chance to pick up the first down, even though he beat the linebacker, because the cornerback was well versed in what Texas wanted to do on the play, as was the left safety, who knew that the post by Buckner was a primary read and arguably takes away the route. Based on the accuracy standards set by McCoy last season, the post to Buckner is still a throw that he can make with the proper timing, but it would be a close play. If McCoy looks downfield at Buckner, he might force the cornerback to stay with the big receiver and give Shipley the step that he needs against the cornerback to pick up the first down or at least have a much better chance of doing so.

Back to Marquise Goodwin. The true freshman speedster is on the field for a reason -- because of his sick speed and the pressure that puts on the defense. If you have a recording of the game, rewatch the play just to get a look at Goodwin's speed, which obviously doesn't translate to pictures. Let's look at another angle conveniently supplied by the producers at ESPN:

In the above angle, Goodwin gets jammed by the cornerback as he passes him off to the flat-footed safety, who, as mentioned earlier, has no chance to keep up with Goodwin at this point.

Just for further proof, check out the above shot. This type of coverage on the top side of the formation on this play is going to be typical this season when the Longhorns go to five-wide sets. Often, the receiver matched with Jordan Shipley on one side of the field will be Goodwin or DJ Monroe running a go route, the same pattern against similar coverage that Clemson used with CJ Spiller to pick up big yardage against Georgia Tech earlier this year and the same pattern against similar coverage that used to give Missouri absolute fits last year. Running a go route down the sideline against a two deep safety look was guaranteed yardage against the Tiger secondary. If the Longhorns want to increase the number of big plays in the offense, looking for Goodwin or Monroe on these type of plays is a good place to start. It may be that McCoy needs more time with both players to create the type of timing and trust that will allow him to uncork some throws deep down the field, but judging by how much separation Goodwin is about to create, McCoy could probably underthrow him by about 10 yards and still have a touchdown.

Furthermore, opponents are doing a better job this season taking away the crossing routes to Shipley that the Longhorns used so often last season on third down with so much success. Wyoming smothered the route last week and Tech did a good job of defending this week. Even though Shipley has an advantageous match up against a linebaker, that's not always enough, especially if McCoy is going to stare down Shipley the whole time. If McCoy refuses to throw to Buckner or Goodwin on the play, that's fine, but he has to better use his eyes to manipulate defenders or the Longhorns are going end up with a lot of completions to Shipley this season that fall short of the first down.

It's a well-designed play and one that the Longhorns love to run, so it doesn't need to be scrapped from the playbook, even though the defense pretty much knows what is coming. The problem is with the execution, particularly by McCoy. He either needs to look deep to Goodwin, hit Buckner coming out of his break, or use his eyes to manipulate the defenders to get Shipley more time to get separation from the linebacker. If the Longhorns can force defenses to adjust to the route by having the cornerback try to stay with the receiver all the way down the field, Shipley could run an option route and go outside if the linebacker doesn't want to give him a release inside and pick up the first down with the room created by the cornerback heading down the field.

Until McCoy becomes more comfortable with the other receivers on the field and stops leaning so heavily on Jordan Shipley, the Longhorns will struggle at times converting third downs. While the two-deep coverage Texas is seeing a lot right now, and will continue seeing, usually keeps everything in front of the safeties, the go route Goodwin is running will almost always get past the safety unless he starts getting depth as soon as or right before the cornerback jams the receiver, especially with receivers as fast as Goodwin and Monroe. In other words, it's a coverage beater and McCoy needs to adjust.