The State of Oklahoma: Tulsa, Miami, and OU's Defensive Back 7

Share All sharing options for: The State of Oklahoma: Tulsa, Miami, and OU's Defensive Back 7 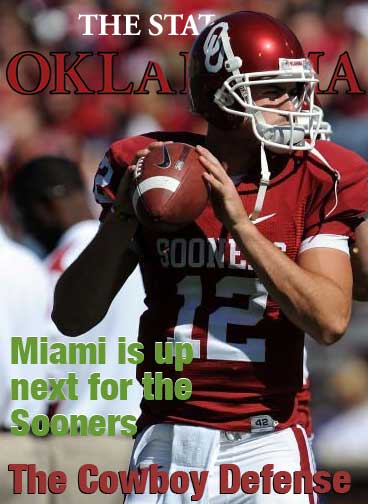 School work has saddled me a bit, so the State of Oklahoma will be coming in two parts today; Oklahoma this morning and OSU later this afternoon.

Don't look now, but Oklahoma is now back in the Top 10.  You can debate the merits of this, but while OU has not played anyone of note after BYU, they have responded nicely with crushing victories over Idaho State and Tulsa.  I will briefly review Oklahoma's impressive win over Tulsa and also briefly discuss their game against Miami in two Saturdays.  The bulk of this post, however, will focus on Oklahoma's linebackers and secondary to finish up the 2009 "previews" of Oklahoma's roster.

When OU shut out Idaho State, I didn't give the game a second look.  Going into last Saturday, I was fairly certain OU would win easily but I expected at least a few scores from Tulsa's offense.  Instead, Tulsa was hounded all day, and lost in the hoopla over Landry Jones' six touchdown passes is that OU's defense blanked a fairly good offense.  Tulsa didn't play anyone of note before OU, but they scored 37 and 44 points in their first two games and averaged well over 400 yards of total offense per game.  Tulsa was second in the NCAA in scoring offense in 2008 and sixth in 2007, and while their QB is new (our very own G.J. Kinne), he stepped in nicely the first two games.  Tulsa also had to replace their leading receiver and rusher, but they have guys like Jamad Williams and Slick Shelley to go along with all-purpose guy Damaris Johnson.  This is not an inept offense that OU forced into 269 total yards and three turnovers.

Tulsa had a chance to make this a game early, but a key interception and a missed FG doomed them from the get-go, and then it got ugly.  This game showcased the strength of OU's front seven on defense with Kinne being sacked six times:  Three by Jeremy Beal, two by Ryan Reynolds, and one more by Travis Lewis.  Gerald McCoy was once again disruptive and Adrian Taylor recovered a fumble, and the dominance of the OU's line gave Tulsa no chance.  We've already talked about the line, and below, I'll talk a bit more about the linebackers.  Hint:  They're pretty good.

The weakness of the OU defense lies in their secondary, but on Saturday, they were pretty solid.  Brian Jackson had the key, early interception and nine tackles, a tally matched by safety Quinton Carter who also had an interception.

Offensively, the OU receivers still had trouble with dropped balls but Brandon Caleb had a huge day and looks firmly entrenched as the Sooners' #2 guy behind Ryan Broyles.  The running backs were efficient, and the OU offensive line, while still having some ways to go, has eliminated many of the stupid mistakes that doomed them against BYU.  We already know about Landry Jones, and you have to give the kid credit for a six touchdown day (he did, however, throw two interceptions).  Tulsa or not, it was a good day for the Sooners, especially with the production seen from problem areas such as their secondary, their receivers, and their offensive line.

Next up:  A More Dangerous Hurricane

Miami has been something of a mild surprise so far, although you can argue their two big victories were against overrated teams in G-Tech and FSU.  It is worth nothing that Florida State just lit up BYU, but I'm not sure how much we can make of that since the logic that Miami > FSU > BYU > OU does not always fly in college football.  In any case, the Hurricanes are riding high, with Pat Forde jumping on their bandwagon rather early over at ESPN, and if Miami beats Virginia Tech this week, this game will be a huge opportunity for Oklahoma to jump right back into the national title mix.

I will preview the game in more detail next week, but for now, keep an eye on Sam Bradford's status, who just returned to practice this week.  Furthermore, we should watch the Miami-Virginia Tech game with a lot of interest, particularly their QB Jacory Harris and Miami's big receivers.  Defensively, Miami looked pretty sharp against Georgia Tech's rushing attack, and their front four will need to be instrumental against Oklahoma in two weeks.

The Sooner Back Seven

The strength of the OU defense lies in their defensive line, but how good is everyone else?  Let's take a look.

Ryan Reynolds, MLB:  We know Ryan Reynolds well.  Last year, he went down with an ACL injury against Texas, which Sooner fans point to as the main reason why OU lost (not true, but it didn't help).  This year, Reynolds has come back and has played pretty well.  Reynolds is the leader of the defense, and what he lacks in elite speed and quickness he often makes up with smarts and toughness.  His interception against Max Hall was very impressive, tracking Hall's eyes and snatching the ball out of the air, and as noted above, he had two sacks against Tulsa.  However, his coverage skills overall are a bit limited, and I'd be more than happy if Venables once again thinks it's a great idea to use him to defend Shipley or Buckner in Dallas.

Reynolds is a fine player and heck, Brent Venables gave him a perfect grade last year against Baylor.  Whatever that means.  Stoops also said that with guys like Reynolds, this OU defense can be the best ever.  I surely have not heard that before.

Travis Lewis, WLB:  Along with Reynolds, Lewis is on the Butkus award list.  Lewis was surprisingly productive last year as a freshman, breaking OU's single season tackling record with 144, including 19 against Texas and he was selected as the Big 12's Defensive Freshman of the Year.  Lewis is very effective attacking the line of scrimmage and clogging running lanes, and he is the most athletic of the Sooner linebackers.  He's decent in coverage and is great at chasing a play down from the backside.  He's also mentally tough, which is something even Horns fans can respect.

If Reynolds is the "heart" of the defense, Lewis is the playmaker among the linebackers.  He got dinged up a little against BYU, but he's already had a solid start to this season.

Keenan Clayton, SLB:  Clayton is a strong player who isn't too far behind Lewis in playmaking.  Clayton set the OU record for forced fumbles with six last season, had 10 TFL, and 4.5 sacks.  He also had nine pass breakups last season, although he perhaps tried too hard to fend off traffic citations.  Anyway, Clayton is decent at short coverage and he is strong meeting blockers, giving the Sooners another able guy in the middle of their defense.  His pick against BYU was pretty nice, although I did not think the Sooner LB's as a whole did a good job covering the middle that game.

Very good, but not unbreakable

The Sooner linebackers are a strong unit.  The loss of Mike Balogun due to his bizarre eligibility issues thins out their depth, but it is not a giant loss and Austin Box is there for them.  Reynolds is solid and rarely lost on a play, Lewis can cover a lot of space, and Clayton has a knack for turnovers and big tackles.  You can argue that Oklahoma has the best starting crew of linebackers in the Big 12.  That being said, while their coverage skills aren't bad, it's far from perfect.  They struggled against BYU's tight ends, and Reynold's lack of elite athleticism can be picked on.

Before the season, ccmachine told me in an email that the safeties may be a bigger concern than even the offensive line.  After the first game, I'm sure his opinion changed, but with OU starting brand new safeties, this is not an unreasonable concern.  Then again, considering how remarkably slow the OU safeties ran their 40's at the Combine, it might be good for the Sooners to have new faces at safety.  Lendy Holmes is sure happy he's gone.

Did you say "Oklahoma safety?"  Sounds like an excuse to play this...

Quinton Carter, FS:  Carter only started twice last year but one was in the Big 12 title game.  He is a big hitter and excited Sooner fans with his physicality, although he had to learn to lay off his own teammates.  Here's an example of that, at the expense of Jeremy Maclin:

Needless to say, the guy can lay the wood.  However, his coverage skills are not elite, and he did not look good against BYU.  If you wanted to make a crude comparison, you could point to Roy Williams:  A big hitter with good straight line speed but with suspect coverage skills, although he does have an interception.  As eager as this guy is, misdirection plays can screw him up.

Sam Proctor, SS:  Proctor had no starting experience before this year, showing up only on special teams in 2008.  He possesses good size but he does not have elite speed, listed as a 4.6 forty guy (I guess this is typical for OU safeties).  Proctor struggled against BYU and is not much of a playmaker, but he doesn't really need to try to do too much with Carter flying around.

Brian Jackson, CB:  Jackson is a solid corner and has good size, standing at 6'1, but he is not all that fluid and I doubt he can keep pace with speedy receivers.  He is the only senior in the Sooner secondary and he's got a good understanding of where he needs to be.  He's a so-so tackler and he had a pretty good game against Tulsa, although not so much against BYU.   He was a All-Big 12 Honorable Mention last year.

Dominique Franks, CB:  Franks is supposed to be their top corner, having a nice blend of size and athleticism.  He was a second team All-Conference selection last year and this year, but right now, he's probably being outplayed by Brian Jackson.  Franks had a pretty poor game against BYU, getting burned on several occasions, most notably on a 49 yard toss to McKay Jacobson.  However, like the rest of the defense, he was much better against Tulsa.  He was the guy who said that Tim Tebow would have "only" been the fourth best QB in the Big 12 last season.  Probably not a smart thing to say, but at least it shows confidence, I guess.

Depth:  Almost nothing, to be honest.  They have some good recruits, obviously, but behind their starters there are a bunch of freshman, redshirt freshman, and sophomores with little to no game experience.  The most notable is freshman Javon Harris, who was battling Sam Proctor for the starting safety job before the season.  However, he hasn't seen too much action so far.

Despite some good athletes, this is far and away OU's weakest unit on defense.  The safeties are more athletic than their predecessors but inexperienced, and while the starting corners are decent, they are not lockdown guys by any means and the depth is very unimpressive.  It will be an interesting matchup with Miami's receivers.

Personally, I feel very comfortable with our receivers matched up with their secondary.  The big concern is their D-line and the activity of their linebackers.  Their linebackers can be beat in coverage but we might struggle running the ball against their front seven, and that will allow both their line and their LBs to start gunning after Colt.  One guy to watch is Quinton Carter, who will do what he can to discourage Shipley, Buckner, or whoever else from destroying Oklahoma's defense from the inside out again by laying some big hits.