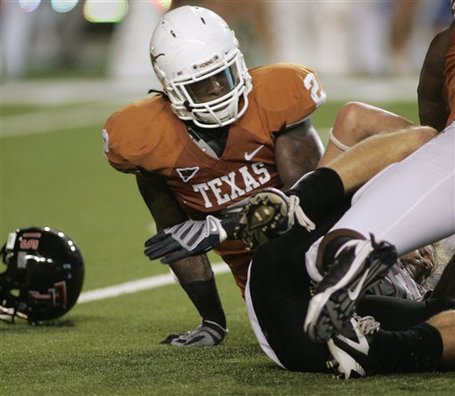 Sergio Kindle is ready for more. And we are ready for him to get more.

Kindle, who has been hyped as Texas' best pass rusher, didn't have a sack this season until the play that turned the game in Texas' favor. It prompted a long-awaited congratulations from his father, who had been after him to get to the quarterback.

"He liked that," Kindle said. "Getting to the quarterback is the ideal thing to do and to get a perfect shot like that I guess is a defensive end's dream."

There is still discussion about the running game.

"We’ve been all over the lot with running backs," Texas coach Mack Brown said. "Hopefully we can tie it down. Fozzy has been practicing this week so hopefully he can get some playing time."

Texas defensive coordinator Will Muschamp looked like he learned something from his team’s defensive effort last season against Texas Tech. The most impressive factor in this year's matchup was the way Texas' roaming defense snuffed out Tech’s screen game, which is the best in the conference. Tech’s running backs produced five receptions for no yardage in last week’s game. The week before against Rice, Tech’s running backs produced four receptions for 82 yards.

The Horns are not happy.

The University of Texas football team, as it always preaches, holds itself to a higher standard.

This is a standard that left it disappointed with a 12-1 2009 season, and it certainly is one that has the Longhorns scratching their heads after a 3-0 start that includes two blowouts and a 10-point, revenge victory against Texas Tech.

"We're still trying to play to a standard, and we haven't gotten to that standard yet," Texas head coach Mack Brown said. "We're trying to play to the standard to be the best team in the country, and we're not close. So really and truly, we've got so much work to do, regardless of who we play at any time. We need to play better, and our guys know that."

Then Brown put it another way: "The exciting thing is, we're 3-0 and unhappy," he said.

The Aggie offense has been good to date.

But this offense, which is awash in freshman playmakers and offensive linemen learning new positions on the fly, definitely seems to be coming together. Much of the credit for that should go to Johnson, a junior who would be the early frontrunner to be named the Big 12’s Most Improved Player of 2009 if the league bestowed such an honor.

That is because Johnson (6-foot-5, 239 pounds) is raising eyebrows with his actions, rather than his words, this fall.

Johnson ranks second nationally in total offense, at 403 yards per game, and is the only Big 12 quarterback ranked among the league’s top 10 in rushing (67.5 yards per game). His pass efficiency rating (156.3) is the best among any of the league’s eight returning starters at quarterback and represents a huge jump from last season (137.4).

Yes, the Aggies are improving.

The Aggies currently rank in the top 20 in eight national statistical categories after notching victories over New Mexico and Utah State. In those same categories last season, the Aggies ranked in the top 40 last season in only one and in four of those categories, they ranked 97th or worse.

Texas A&M coach Mike Sherman realizes it is still very early in the season and claims not to get too wrapped up in his team's statistical improvement.

"I'm very realistic when it comes to statistics. I don't spend a whole lot of time looking at the stats," Sherman said. "The biggest stat we have is the turnover ratio. It goes without saying that if you don't turn the ball over you have an excellent chance to win the football game. We've been fortunate enough to do that, not turn the ball over and create turnovers in the last couple of ball games. That's really the only stat I pay a whole lot of attention to. That is the most important one."

Gerald McCoy is just sure that that the Sooners will put pressure on Miami quarterback Jacory Harris.

Miami’s offensive line has allowed just one sack in 2009, giving quarterback Jacory Harris time to throw five touchdowns in two games, including a 386-yard outing in the season opener against Florida State. "We’ll change that,” said junior defensive tackle Gerald McCoy. "He hasn’t really been flustered or anything yet, and we’ve been working really hard on making sure we get pressure on him.”

ESPN's Time Griffin has his weekly predictions. He also has some things to watch this week.

Where have you gone, Kansas State?

The Wildcats are glad to be back home after two road games.

Over the past two weeks, the K-State football team has been one of the most traveled teams in college football.

Due to contractual rights and scheduling layovers from last season, the Wildcats were pitted against Louisiana-Lafayette in Lafayette, La., and UCLA in Pasadena, Calif., taking chartered flights out of Manhattan for each trip. Each time, the team departed Manhattan on Friday and returned the following Sunday.

To put that in perspective, that’s more than 4,500 miles in a span of six days.

Bill Snyder has kept his sense of humor.

Tennessee Tech is coming off a 17-7 loss to Eastern Kentucky and will be a heavy underdog this weekend when it travels to Manhattan to take on Kansas State.

With that in mind, K-State coach Bill Snyder was asked this week how he would keep his team motivated against the second Football Championship Subdivision team to come to town this season. You know, how will he get his players to take the next opponent seriously?

The question made Snyder laugh.

So far, no suspensions for the fisticuffs between the football and basketball players.

"There’s still a lot of things that have to get to me, in terms of exactly what happened and how it happened," Mangino said following the team’s afternoon practice. "But based on what I have right now, I don’t see anything that would have me discipline any particular player."

Missouri linebacker Will Ebner is not a guy you want to meet in a dark alley. Or on the football field.

This Missouri sophomore linebacker delivers his explanation of how to tackle in the same manner as he tackles. With a force that vibrates sinew and bone.

"Desire not to just tackle, but you want to take that guy out of the game," Ebner said. "You want to go through him."

Ebner — 6 feet 1 and 230 pounds — hails from Friendswood, Texas. But don’t be fooled. Will Ebner doesn’t want to be your friend.

He speaks of "kill shots."

And of a quarterback who may not see Ebner coming?

Colorado outside linebacker B.J. Beatty wants to prove everyone wrong.

"This past week, I took it upon myself and challenged myself to prove people wrong, prove the naysayers wrong and prove that this defense is good and we`re a talented bunch," Beatty said.

Some of those naysayers still might not be convinced given that the Buffs` 24-0 shutout came against a Wyoming offense that hasn`t scored in nine quarters. Those skeptics will undoubtedly continue to fuel Beatty, who believes the Buffs will turn around their season in the coming weeks and months as they get more comfortable and build confidence.

Beatty produced two sacks and four total tackles against the Cowboys and now leads the Buffs in sacks heading into next week`s Thursday night game at West Virginia. It`s no coincidence that Jones led the team in sacks last season.

Good to know. Buff receivers are catching on.

The big play has played a big role in Colorado’s season so far. Unfortunately, they’ve all been on the wrong side of the ball.

Through the first three games of 2009, the Buffs have had just two pass plays go for more than 30 yards. It suffices to say that Andre Simmons and Anthony Wright, a pair of speedy CU receivers brought in to boost the Buffs’ receiving, will add to that total this season — but for now, CU fans will have to remain patient while the duo catches up to the offense.

Does Colorado have the worst schedule in the Big 12?

Welcome to Week 4 of what is almost surely the Colorado Buffaloes` most-convoluted schedule ever.

It`s been a made-for-television schedule -- but not one made for success.

The Bears have returned to reality. Getting beat tends to do just that.

The Bears were getting votes in the Top 25 polls, were featured in Sports Illustrated and were drawing attention from other national media.

But it didn’t take long for the Bears to crash hard.

The Bears didn’t come close to playing their best football in Saturday’s 30-22 loss to Connecticut. The Huskies took control from the outset and pushed the Bears around on their own field.

BU’s Robert Griffin completed 17 passes against the Huskies for a total of 119 yards, an average of seven yards per pass. But even those numbers don’t tell the whole story, as 12 of Griffin’s completions went for six yards or less, including four that resulted in no gain. Six times the Bears were forced to punt the ball away.

It begs the question — is Baylor becoming too reliant on the short pass?

Lubbock is no longer dry. Congrats to the Raiders! (More on Lubbock's alcohol epiphany.)