The Snap Shots series continues, this time with a look at Colt McCoy's execution on two iterations of a similar play, one ending with a 20 yard gain... the other with an interception. The video quality I used is pretty poor, but you should be able to get the ideas.

Situation #1: 2nd and 13, Texas is in its 11-personnel, with Buckner (highlighted) upright on the line and McGee in shotgun next to McCoy. Texas Tech is in the nickel, with two backers, corners man under, and a pair of safeties 12 yards deep. 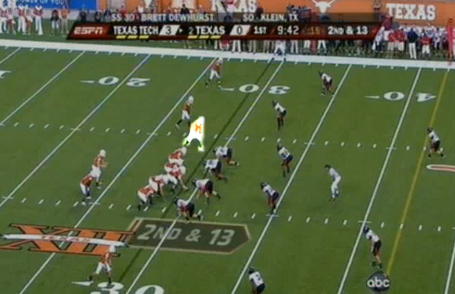 Play Action: McCoy fakes the hand off to Mssr. McGee, bringing the Will linebacker in, while holding the Sam (highlighted) as Buckner releases upfield. 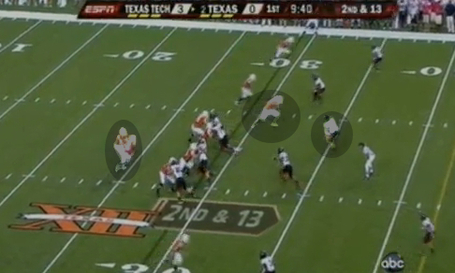 The mismatch: Seeing now that McGee didn't take the handoff, the Will holds ground, while the Sam shields Buckner underneath as the tall tight end glides past him. (Not pictured: Tech's safeties, who are still sitting deep.) 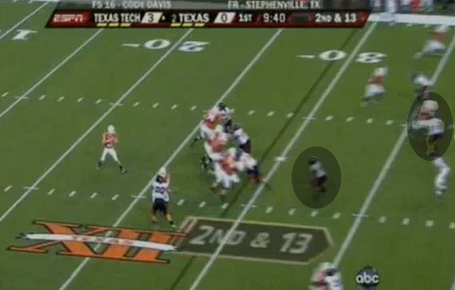 The completion: Dan Buckner has an obscenely large free zone to slide into. As the ball arrives, you can see Tech's free safety belatedly moving in. 20 yards and a first down, Texas. 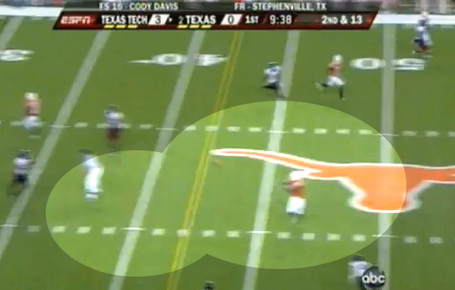 Situation #2:  1st and 10, Texas is again in its 11-personnel, only this time Gregorio (highlighted) is your tight end on the line, McGee is in the shotgun next to McCoy, Shipley is the split end at the top of the screen, and Chiles and Malcolm Williams are the slot and sub-B receivers on the strong side of the field. Texas Tech is again in the nickel, only this time, the Will linebacker is on the line coming on a blitz while the strong safety is moving forward late. 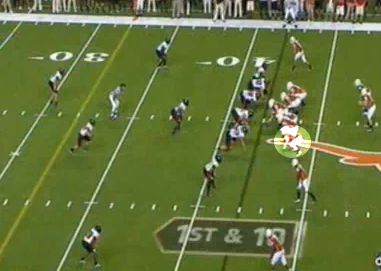 Play Action: After the snap, Colt fakes the handoff to McGee and the line picks up perfectly each of the five Tech rushers. The Sam linebacker is locked in on McGee, the strong safety stops his charge to greet a releasing Greg Smith. The free safety is starting to move to his right, and I've highlighted the hot zone where Colt should be looking. 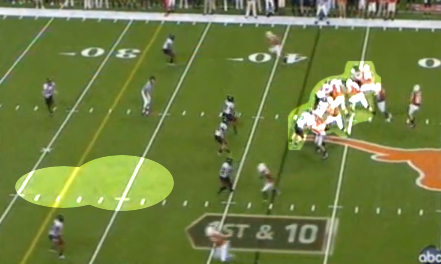 The options: Colt's options are numbered below. (1) Vondrell McGee is releasing towards the Sam linebacker. (2) Greg Smith is covered by the free safety. (3) Malcolm Williams is moving past the nickelback. (4) John Chiles is heading upfield with the right cornerback. 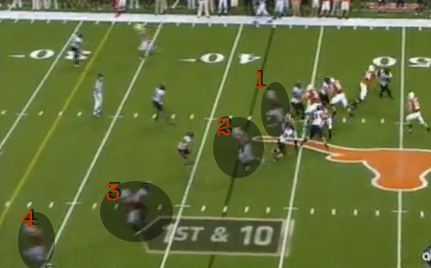 The decision: As Colt steps into his throw, you can see in the bottom left of your screen that Malcolm Williams is heading up and to his right, into the hot zone, separating from the nickelback, who appears to be sitting in a zone. Note the picture perfect pocket McCoy has to step into if he wants it. If McCoy's ball is heading to Williams at the 30 yard line, it's a completion... 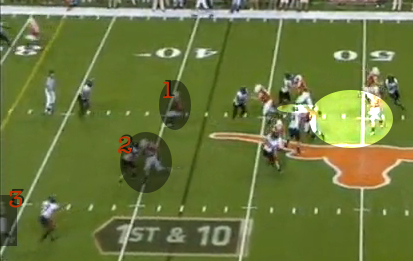 But it's not: Colt's made the wrong read, throwing over the nickelback towards Chiles. 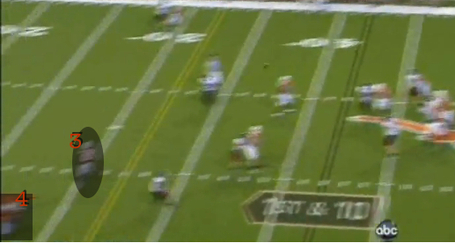 The interception: If Colt's pass is lower, Chiles makes the catch -- he had a little space in the zone. The problem is that the throw to Chiles required McCoy to throw over the nickelback, who stayed underneath in zone. McCoy threw it too high, Chiles leaped to try to catch it, and the ball bounced off his hands into the waiting arms of the Tech defender. 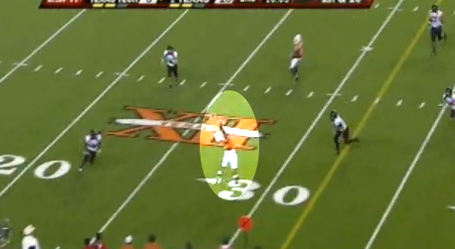