Colt McCoy is back. The defense looks great. Hallelujah.

What else is there to say? Texas dismantles UTEP. This was the most lopsided score since the 70-3 drubbing of Colorado in the 2005 Big 12 championship game. (Box score)

The Horns were just making a statement.

But this was a landmark victory for the Longhorns and their most complete victory of the season.

After Colt McCoy's interception was returned 50 yard for a touchdown by Melvin Stephenson, the Longhorns blew the game open by scoring on six-straight possessions to turn it into a rout. 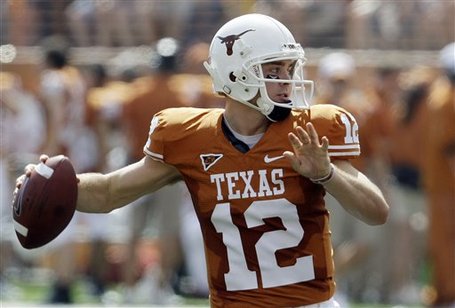 McCoy did not seem happy with receivers after several dropped passes, but overall he had a great day.

McCoy pumped his fist and yelled at receivers after a couple of dropped passes,then hooked up with Buckner again. This time, it was a nifty one-handed grab over two defenders a minute before halftime for Buckner's fourth touchdown of the season.

This was Colt McCoy's 21st straight game with a touchdown pass.

The redshirt freshman just returned a UTEP kickoff 91 yards for a touchdown. In the process, Monroe set a Texas season AND career record with his second kickoff return for a touchdown, in just his fourth game.

They're ranked No. 2 for a reason. They have a really good defense, good up front and good coverage. I think a couple of the interceptions I had, I was trying to force it, trying to make a play, and I pretty much learned from that really quick. You can't force yourself to do too much.

Who is McCoy's security blanket?

It has to be Dan Buckner. He had six catches for 71 yards and two touchdowns. Buckner is quickly becoming Mr. Touchdown. He already has four this season.

Jordan Shipley had another great game. He missed Bevo this week.

Jordan Shipley might have been better off facing Bevo than he was returning a punt in the first half.

Shipley, who did not call for a fair catch, was absolutely drilled by Melvin Stephenson right as he was catching the ball. But it was an obvious 15-yard penalty.

Shipley, as usual, got right back up.

The Horns get a report card.

Where did everyone go?

This may have been the third-largest crowd ever to watch a football game in the state, but by the third quarter, the announced crowd of 101,144 had considerably thinned. That'll happen with a 40-point blowout at halftime.

The Horns are having fun again.