Anatomy of Stagnation: Settling For Field Goals Against UTEP

Share All sharing options for: Anatomy of Stagnation: Settling For Field Goals Against UTEP

It probably seems rather picky to focus in on the two possessions that ended in field goals for the Longhorns on a day when the offense scored seven touchdowns and absolutely blew UTEP out of the water. However, the fact is that the home team probably should have scored 80 and could have had even more than that had Mack Brown not completely shut down the offense for the last 20 minutes or so of the game. The reason for the tough-love focus in this post is exactly the same reason that Texas won so easily -- UTEP provided so little resistance, there's really no excuse for the first-team offense not to have scored a touchdown every time they got the ball. High standards, for sure, but nothing unattainable for this offense as it gains momentum with every passing game.

With Texas up 13-7 roughly halfway through the first quarter, UTEP's third possession actually included a completed pass after a fumble and three-and-out on their first two drives, but an illegal formation penalty, a run for a loss of a yard, and an incomplete pass halted the drive for the Miners and led to a punt. Unfortunately for Mike Price's team, the long snapper sent the ball over the head of the punter and into the UTEP end zone, where Malcolm Williams absolutely flattened the punter as he attempted to pick the ball up and kick it away: 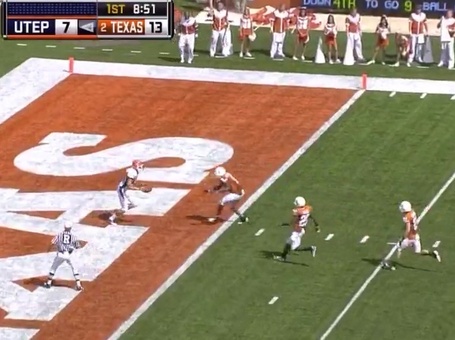 Word to the wise, Greg Hiett -- what you're about to try to do is not a good idea. 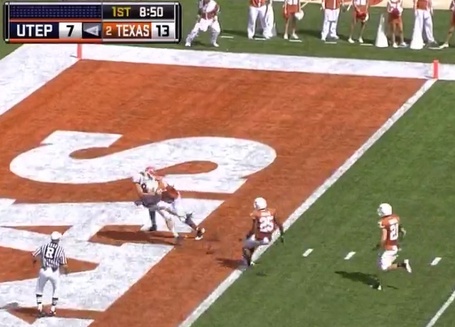 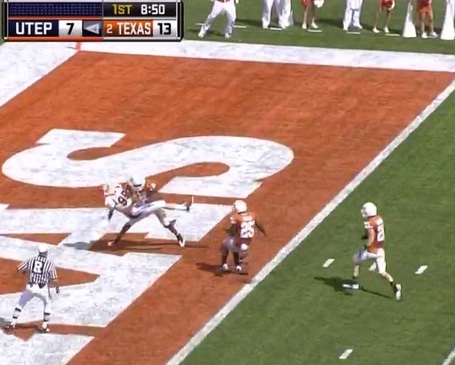 So yeah, that didn't work out too well. To Hiett's credit, he did get the ball out of the end zone... 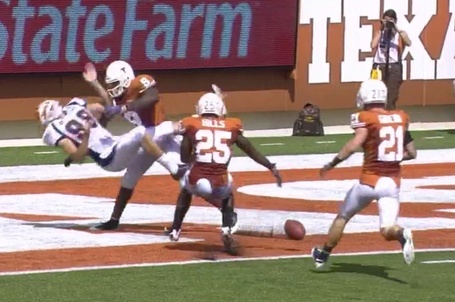 Another angle, just for fun.

The ball eventually made its way to the six yardlilne, where the Longhorns took over after UTEP recovered the ball.

Texas comes out in 11 personnel with EBS on the line of scrimmage and Tre' Newton in the backfield on Colt McCoy's left, with John Chiles at the flanker position and James Kirkendoll as the sub-B receiver: 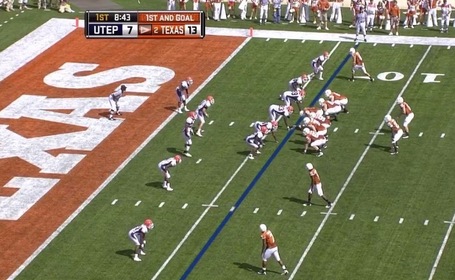 The Longhorns run a zone play right behind Michael Huey and Kyle Hix, the more productive side of the line early in the season, but Huey misses his block and Newton gets taken down in the backfield for a three-yard loss, another example of how one player not executing on the offensive line brings down a whole play, even if all the other players execute well. It's not even clear what Huey was doing on the play -- he has a lineman right in front of him, but starts turning right at the start of the play, even though the opposing player is coming across his left shoulder and because he is facing the wrong direction, the defender gets by him easily. Huey's footwork should have been reversed -- he should have turned his body left to pin the defender inside. It's also worth pointing out that the Longhorns faked the screen pass on this play to freeze the defenders on the back side of the play.

Texas stays in 11 personnel, but this time with Newton on McCoy's right side: 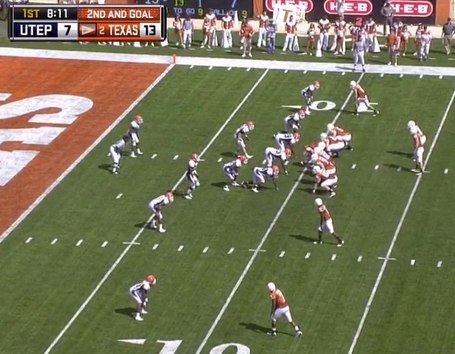 McCoy tries to fit the ball into Chiles, who is running a slant on the play, but a defender at the line of scrimmage tips the ball and the coverage is good by the UTEP defender -- the pass falls incomplete. Had McCoy waited another split second -- and he could have because the protection, he would have had Tre' Newton in the flat on his right and Newton might have scored a touchdown because there were not any defenders within 10 yards of him and Jordan Shipley took the cornerback (and possibly the safety) into the end zone in man coverage, meaning the UTEP player had his back turned to the play:

Greg Davis sends Dan Buckner into the game, replacing EBS, leaving the Longhorns in their best version of 11 personnel, with Buckner at the flex position and Tre' Newton lined up on McCoy's right: 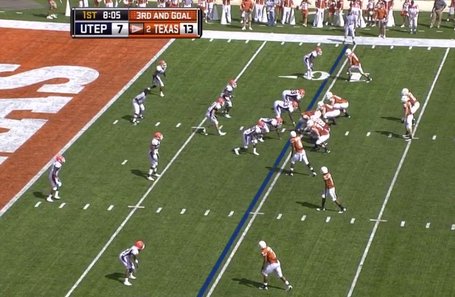 James Kirkendoll runs a slant and McCoy hits him short of the goalline, forcing the Longhorns to attempt a field goal. Just like the last play, Tre' Newton was open coming out of the backfield, but the best play was to a wide open Dan Buckner running a post behind the defender who eventually came up to tackle Kirkendoll short of the goalline:

Three plays for three yards, 1:25 expired. One of two passing for McCoy for six yards. One catch for six yards for James Kirkendoll. One carry for negative three yards for Tre' Newton. One missed block by Michael Huey.

Against a completely overmatched UTEP team, not being able to score from the six yardline is unacceptable. The missed block by Michael Huey epitomizes the work of the offensive line through four games -- mental and physical breakdowns happen by individual players way too often. Comparing the second and third plays shows just how big of a difference there is between EBS and Dan Buckner -- EBS can't create separation on his route, but Dan Buckner easily gets open in the back of the end zone. If the Longhorns are going to throw the football -- and there was little doubt they would do so with second and goal from the nine yardline -- Buckner must be in the football game.

This drive also demonstrates that Newton should be catching a few more balls out of the backfield because he was open on his relase on the second and third plays. It could be that McCoy doesn't totally trust him catching the ball because of his drop against Wyoming and a busted play on a hand off last week against Texas Tech. As well as McCoy played on Saturday, and he played extremely well, there is still some room for improvement in going through his reads, particularly in looking for Buckner up the seam because teams are really have a difficult time defending him on those plays.

Up 23-7 with the clock under three minutes in the first quarter, the Longhorn defense gave up a rare first down, but then defended a screen well for a two-yard loss, forced an incomplete pass, and stopped another completed pass short of the first-down marker to force a punt. A 35-yard punt by Greg Hiett gives the Longhorns the ball at their own 23 yardline after a one-yard return by Jordan Shipley.

The Longhorns start the drive in 11 personnel, with EBS on the line of scrimmage and Tre' Newton in the backfield on the right of Colt McCoy: 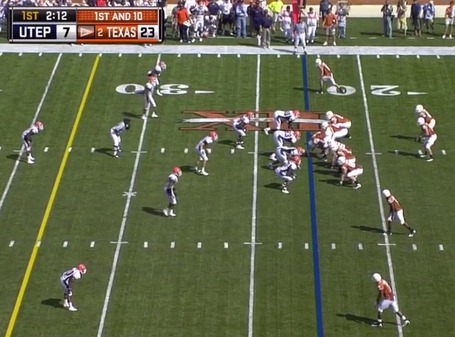 McCoy drops back to pass and receives good protection, but can't find anyone open down field. Stepping up in the pocket, he does an excellent job of keeping his eyes downfield looking for a big play, but finally pulls the ball down and runs left and picks up nine yards before making a smart decision and sliding just short of the first down.

The Longhorns go into their jet tempo and under center (I believe) after the run by McCoy, but the cameras don't catch the start of the play. Jordan Shipley, Adam Ulatoski, and Charlie Tanner all get excellent blocks on the play, as Tre' Newton picks up seven yards running behind the left side of the line. 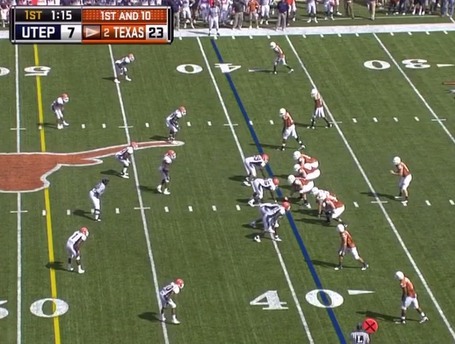 McCoy fakes the screen right to Goodwin to freeze the backside pursuit, then throws the screen left to John Chiles. Jordan Shipley blocks the cornerback defending Chiles and Charlie Tanner and David Snow get out in front of Chiles to lead him downfield for a 27-yard gain: 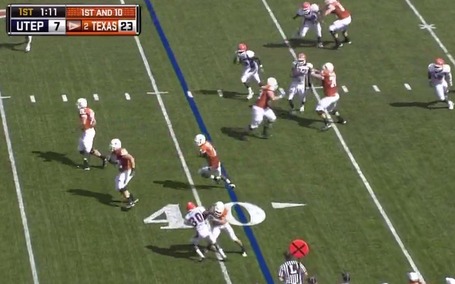 Excellent play design and excellent execution by the Longhorns.

Hustling downfield and going under center in the jet tempo, the Longhorns hike the ball quickly out of their 11 personnel set with Tre' Newton back on the field, who picks up six yards running behind the left side of the Texas line and excellent blocks from Adam Ulatoski, Charlie Tanner, and Jordan Shipley. Tanner did a nice job of holding the defender long enough to let Newton get by, but released the defender quickly enough that no flags were thrown on the play, while Ulatoski showed good feet by getting to the second level and allowing Newton to pick up yardage unmolested.

With the Longhorns in the WildHorn formation, a UTEP defender gets a little too excited and jumps across the line of scrimmage, contacting Kyle Hix. Five-yard penalty, first down.

Texas comes back with their best personnel package -- 11, with Buckner in the flex position and Tre' Newton on McCoy's left: 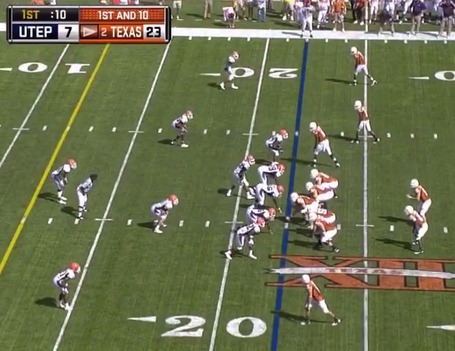 McCoy sees Shipley with one-on-one coverage with only one safety back in the middle of the field and probably makes up his mind to throw the pass to his roommate before the snap. The throw does indeed go to Shipley at the pylon and falls incomplete, but the UTEP cornerback gets flagged for pass interference -- 15 yards for Texas, first down.

In a somewhat unusual move, Texas stays with Dan Buckner in the flex instead of bringing in EBS inside the 10 yardline, as they often do: 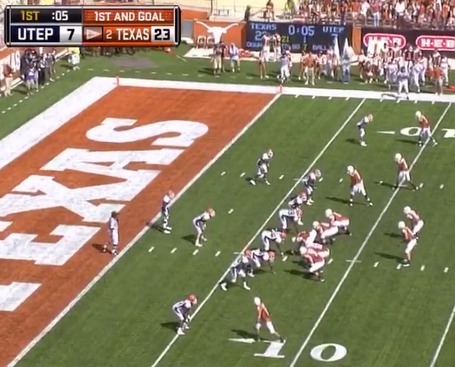 With McCoy rolling right at the snap, John Chiles runs a slant in an attempt to pick off the defender trying to chase Dan Buckner into the flat, where McCoy finds him for a three-yard gain. A good thought on the play call, but Buckner couldn't outrun the defensive back to the corner of the end zone and Chiles didn't quite get in that defender's way well enough.

Starting the second quarter, the Longhorns go WildHorn with John Chiles behind center: 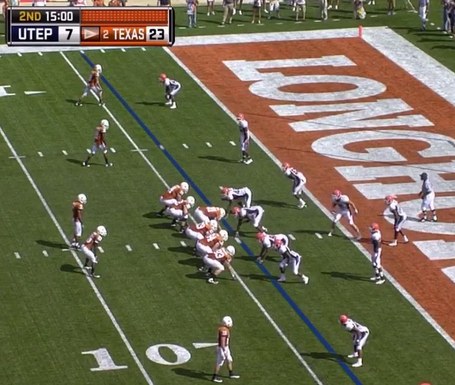 Chiles runs the quarterback counter play that picked up big yardage last week and might have scored a touchdown, except Charlie Tanner blocks the safety farther away from the ball, instead of the linebacker closer to the play and that player eventually tackles Chiles for a one-yard gain: 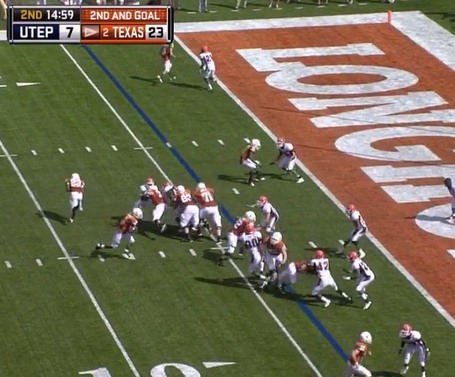 Texas goes back to 11 personnel with Buckner in the flex and Newton on McCoy's right: 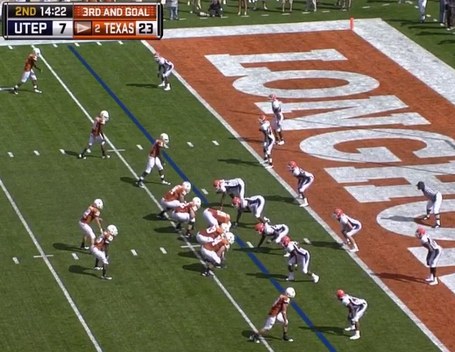 Kirkendoll runs a nice route, taking several steps out into the flat, then pivoting and running a slant across the goalline, creating enough separation for McCoy to throw him the ball, but Kirkendoll drops it after having it hit his hands. Once again, Buckner is open in the back of the end zone, but McCoy made the easy throw to Kirkendoll, who should have caught the ball.

Seven plays, 74 yards, 3:01 expired. Two of three passing for McCoy for 30 yards. One rush for nine yards by McCoy. One rush for one yard by Chiles. Two carries for 13 yards by Newton. Two penalties for 20 yards on UTEP. Three good blocks by Jordan Shipley and two good blocks by Adam Ulatoski and Charlie Tanner, who made a poor decision on the WildHorn play and picked the wrong defender to block. One dropped pass by James Kirkendoll that should have resulted in a touchdown.

For the most part, this was an excellent drive by the Longhorns, who marched right down the field until stalling inside the 10 yardline before the missed block by Tanner and the dropped pass derailed the drive. The good news is that the Longhorns conintued to run the football well in their jet tempo offense and the left side of the Texas ilne blocked much better on this drive than they did in the first two games of the season. No longer is there a sharp difference between running right and running left, due in large part to more consistent play by Charlie Tanner and much, much better run blocking by Adam Ulatoski. The screen passing game to Chiles continues to work well and the fake screen to the other side of hte field probably helped Chiles pick up an extra 5-10 yards by slowing down the backside pursuit, a nice wrinkle.