When after two games Sergio Kindle had failed to de-helmet a single quarterback, let alone record a sack, there was some COME ON CONCERN! amongst some that Kindle needed to pick up his play. Truth be told he was creating pressure, but he didn't do anything against ULM or Wyoming to make SportsCenter.

That, of course, did not last. So why did Kindle get to the quarterback against Texas Tech and UTEP? "Because he's an athletic freak?" Yes indeed, but let's take a frame by frame look to see how he did it and why he's going to get paid to play Sundays.  (FYI you may click any image to enlarge.)

UTEP is four wide, no tight end, tailback alongside Vittatoe in the gun. Texas is in its standard nickel package, four-man rush with Muck aligned over the RB, Robinson sliding down to cover the slot receiver, and Sergio highlighted on the end of the line, down in 5-technique (outside the right tackle) 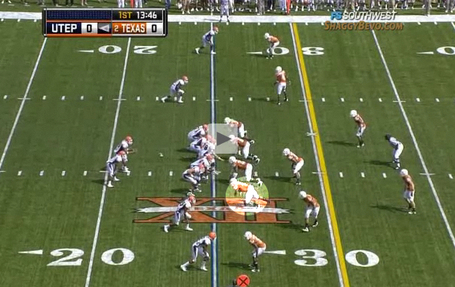 As Sergio explodes out of his stance you can see a couple things. First, he is in fact exploding. Big, quick first steps. Second, look at the big ol' gap created between the right tackle (sliding out to Kindle) and right guard (engaging Houston). Third, we were wondering pre-season if we had a tackle who could occupy two blockers -- Kheeston Randall (hidden here behind the "Play" button) has been terrific in giving us just that. 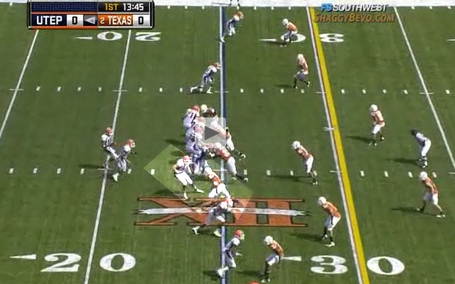 In the frame below you now see Sergio start to make his move. Note Kindle's body angle, aimed towards the quarterback and squared with the right tackle, who appears well positioned to handle a bull rush or shoot Kindle up the field of play where he'd have to circle back down to get to the quarterback. 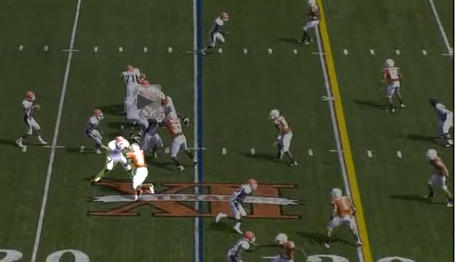 A split second later, you can see much of the same, though from this angle it looks as though Kindle's engaged. All appears well, but keep this frame in mind -- we'll come back to it after a bit. 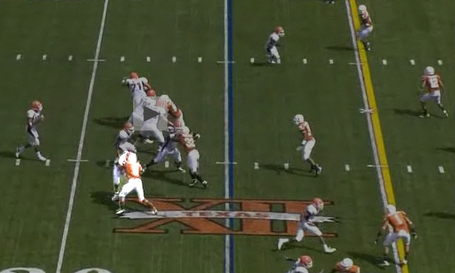 Uh oh.... Not engaged, it seems. And in no time at all Kindle has shifted his positioning from being aimed at the QB to being perpendicular to the sideline, creating space between himself and the slower-footed RT. 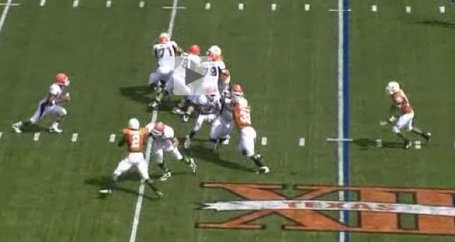 And now we get the money shot.... literally. The difference between a good collegiate defensive end and freaks like Sergio Kindle is what you see below. There just aren't many men his size who can plan their right leg two feet out from under their center of gravity, staying upright and squared in the upper body with their target destination. 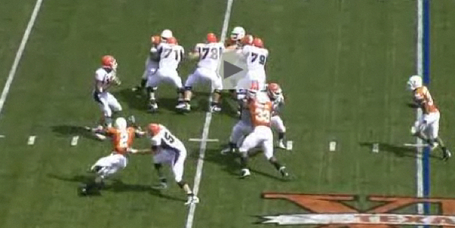 Kindle not only stays upright but is able to propel forward off the plant, at which point it's game over. The right tackle must either hold/tackle Kindle or wave as he goes by. (Two other things to notice here, by the way: First, this is a nice angle of what we're getting from Randall taking on two blockers. Second, note that right after the snap Muck ran up and across the LOS. Here, the tailback decided to pick him up, but if the RB had stayed in to help with Kindle, the Texas linebacker has an unblocked path to the quarterback.) 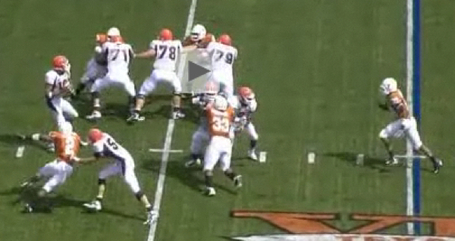 And just like that, Kindle's there. As Muck knocks the tailback six feet back on his ass, Kindle unloads the turnover blow. 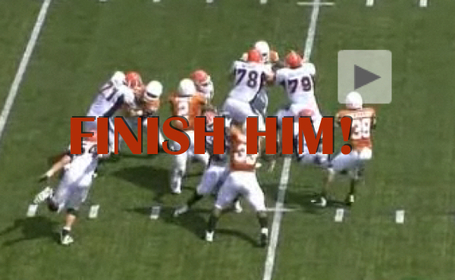 Okay back to earlier and the frame I told you to keep in mind. Here's another angle of Kindle when he appeared to be engaged with the right tackle. You can see clearly from this angle his excellent use of quick and strong arms to push away the tackle's attempt to engage him. 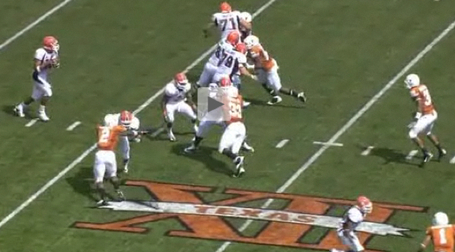 The separation allows him to continue his move without being slowed by what's now a one-arm reach from an offensive tackle... 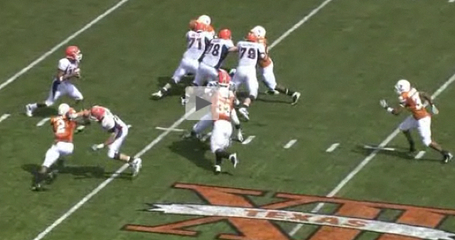 And the athletic freakdom allows him to plant and go, go, to Vittatoe, a sack at this point inevitable. 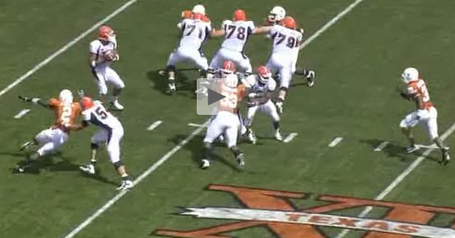 Of course, this was the second straight week that Kindle unloaded on the QB, so let's take a look at the replay from a week prior. Same situation as before, only Tech's tailback is on the strongside of the field. Kindle is again highlighted below, again in a 5-technique outside the right tackle. 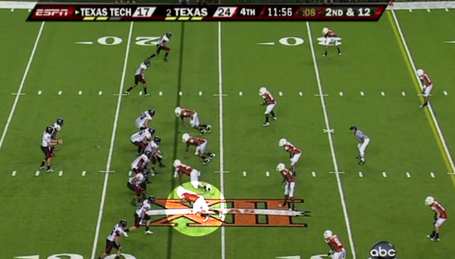 Once more, Kindle appears aimed towards the quarterback, squared and engaged with the right tackle. 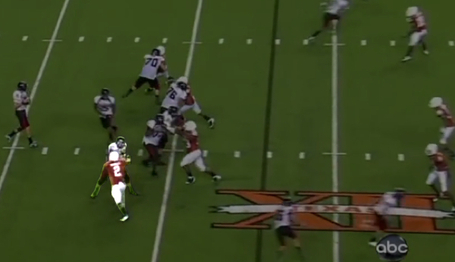 Once again, he is not. He's used his quickness to keep the tackle off him while continuing his motion upfield, shifting his body perpendicular to the opposite sideline to create the separation. 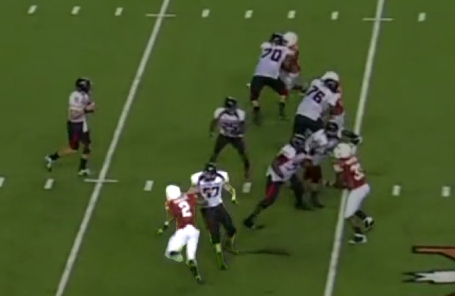 Another off-balance, one-armed reach by the tackle means bad, bad news for the quarterback. 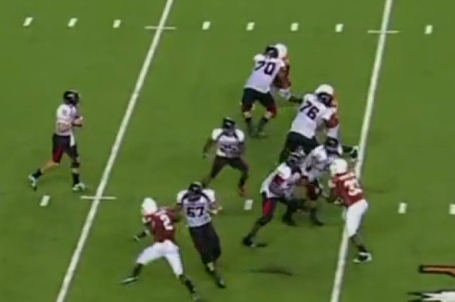 He's now one step away from the freaky plant.... 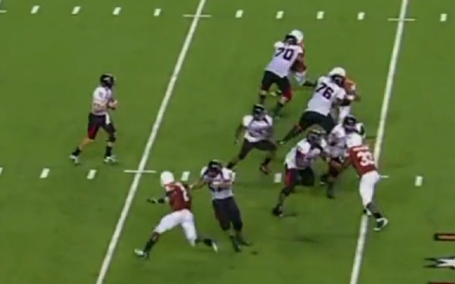 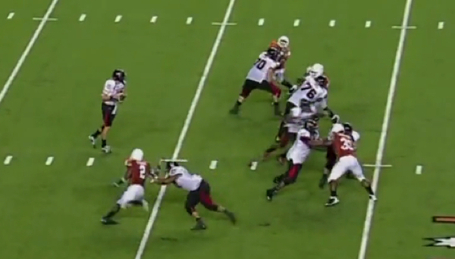 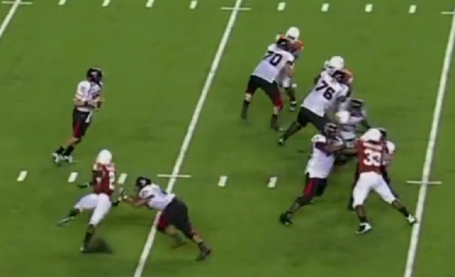 It's curtains for Texas Tech. 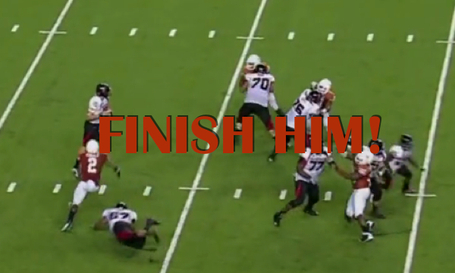