Share All sharing options for: Hyperizers and UT Basketball...

Ladies and gentlemen, the countdown has officially begun...

Any Longhorns fan with a pulse has been enduring an agonizingly long off-season, and the first game simply cannot come soon enough. With a successful team returning most of the key starters--some who turned down the chance to go pro--and bolstered by several highly-ranked youngsters, the thoughts of a national championship are dancing in the heads of all UT fans. Ranked as one of the best teams in the country, Texas will have to beat their perenially powerful archrival in order to bring home the conference championship.

I know it's painful, but we all must wait another seventy-three days for the season to tip-off against Long Beach State...that's what you were thinking, right? And, for the record, we have to wait a full 164 days for KU to come take their beating at the Erwin Center. After the jump, we seek advice and input over a column over the off-season before using the brilliant Nike Hyperizers video (co-starring Kevin Durant) to explain some of the key additions and themes of the upcoming season.

Starting this week, we'll be preparing a column to continue covering the UT Basketball Off-season, even though many of you will be solely focused on football. I was penning some ideas for what I thought would be interesting, and I quickly realized that many of the basic off-season column ideas have already been written and written well. Rather than simply provide things you've probably already read, I thought it would be helpful to do two separate things.

First, here's some handy-dandy links to some excellent columns and resources related to UT Basketball:

1) ESPN Big 12 Summer Shootaround: A perfectly digestable capsule of the conference, including quotes, rankings, and storylines for the upcoming season.

3) Trips Right on J'Covan Brown: This is the biggest must-read on this brief list. I'll touch on this further down in the actual post, but this column (accurately, from what I'm hearing) explains how we might all need to reset our thoughts on the PG Spot for next year. Honestly, I'd recommend skimming his entire author archive and reading the basketball articles.

4) RTC Schedule Analysis: PB linked this earlier today, but Rush the Court gave a decent analysis of the upcoming season. The full schedule can be found here.

Second, since we're at the lazy point in the off-season and have plenty of time before things really get geared up, I thought I would solicit suggestions for a series, analysis, or type of weekly column that you'd want to see. The unlimited freedom to write about the basketball off-season is a blessing and a curse--on the plus side, I can write about anything; on the downside, I cant decide exactly what to write about. Leave any thoughts, wishes, or requests below. 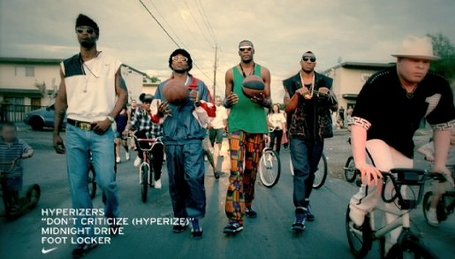 I cant speak for anyone else, but I've been absolutely captivated by the Nike Hyperizers Commercial with KD. For the last several weeks, I've been listening to it more than I care to admit. I know the whole song, to a fault...last week, I quoted the "Playa Hating on a Playa? Girl, I'll see you later" line to my girlfriend. I quoted it when giving relationship advice to a friend. The song remains only behind the immortal single from the Seventh Floor Crew (Language VERY NSFW) as my favorite rap song from a group of athletes. To be honest, I'm listening to it right now...

The more I listen to the song, the more I think the four main characters perfectly represent the four key additions to the UT Basketball team this season. It's downright eerie. Like the Hyperizers--who play circles around their opposition--the Longhorns have four new or previously injured players with the ability to Hyperize the roster. For the record, I'm not comparing the incoming players to the actual NBA players who play each of these characters. Using the lyrics (look at the ones in bold), personality, and "style" of each character, let's walk through this. 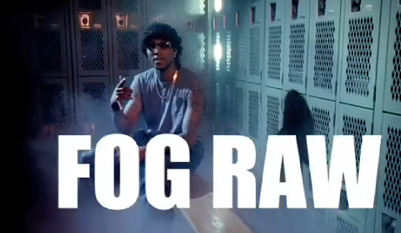 Playa hatin on a playa
Girl I'll see ya lata
You see me in the lane, now you don't, I'm the mayor.
I'm headed for the rim
Fog Raw, get it in
We just wanna ball and laugh
What's your problem?!
When my hands touch the rock, HOT!
Look at the poor little rim, ROCKED!
Baller girls love to smile when I deliver
I make their little pom poms quiver
FOG RAW

I placed Fog Raw first for a reason, since he represents J'Covan Brown. In case you didnt take my advice and read Trips Right's column over J'Covan, I want to highlight the money quote from his article:

Nobody had any idea Brown was THIS good. This dominant. And this adept at running the show. That’s right, I’m not talking about being dominant at the already log-jammed 2 spot. I’m talking about dominating the lead guard position where J’Covan is making plays for himself and others in these high octane games. It’s this playmaking ability that has set the Texas Longhorn basketball intellegentsia on its collective ear. Including Rick Barnes. Hell, we all knew Brown could shoot it and score it. We all knew he had elite size for college guard. But when casual and diehard Longhorn Hoops fans fantasized about morphing the playmaking ability of Dogus Balbay with the shooting and perimeter scoring threat of Jai Lucas to form the ideal point man, they, quite frankly, may have got what they wished for in this talented yet enigmatic player.

Over the last few days, I've made a few calls to some people who know things about the basketball program--to a person, they echoed this sentiment, and some even exceeded it. There appears to be a consensus that J'Covan Brown, right now, is the starting point guard for this team. Make no mistake about it, the quotes from Trips Right above are 100% accurate. If J'Covan Brown keeps performing at his current level, the line-up will be Brown-Bradley-Hamilton-James-Pittman. In other words, you need to start getting really, really, really, really excited about this basketball team.

If J'Covan lives up to this hype, then he IS the Fog Raw of this team...instead of being just another guard in the shuffle, he appears to be on his way to becoming THE guy who will be running the show. Who knew? 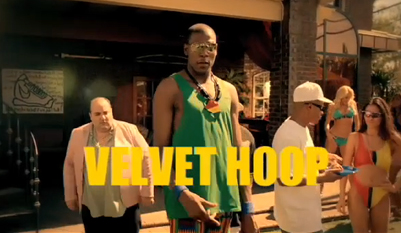 Ooooo Weeee.
It's Velvet Hoop.
Wristband full of loot right next to my shoo--ting hand.
What's the temperature, Sam?
80 degrees. I make a D freeze. Bring them punks to they knees,
don't talk about boring dunks!
Velvet, I'm the youngest in charge
Get the hell out of my garage unless you fixin' my car.
Scoop up Ice, Chief Blocka, and Fog Raw.
Let's ball. To the hoop ya'll. Come on Come on. To the hoop ya'll.
Come on!

This was the easiest connection to make, and many have already been labeling Hamilton as a Durant-lite. Plain and simple, Jordan Hamilton can shoot and he can score. As Big Roy explained in his scouting profile:

Hamilton's "picture perfect" stroke makes him an excellent long-range shooter, with range described as out to 25 feet (the NBA line goes out to 23 feet, 9 inches). Hamilton can both stop and pull a jumper off the dribble (although this is where his balance suffers) and catch and shoot. Those skills give him the versatility to spot up at the line and shoot coming off screens like a guard. Like Avery Bradley, he also possesses a developed mid-range game, with an ability to stop and shoot when moving left a la Dirk Nowtizki.

Calling Hamilton a pure shooter doesnt give him enough credit--he's a scorer, not just a shooter. Coming to a team with players that seemed to struggle to either score and/or shoot last season, the addition of a "Velvet Hoop" is much needed. Hamilton is considered a one-and-done, so this will possibly (and probably) be his only season to Hyperize the team. 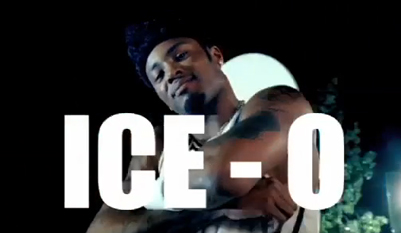 It ain't my fault you can't hang
Maybe this ain't your game
Hoops is about heart and hustle
If you like stayin' on the ground maybe you should wrestle
Breakin' windows when your shot get tossed
Make you run after the ball, my crew yell GET LOST!
Wit a cross make yo ankles hit the pavement
Bu yo coach look at me in amazement
You'll wonder where your aid went
My crew never run
Yes we in Hyperizer's havin' hella fun
(how much fun?)
I said "hella fun" listen hun, wanna know the secret to my rise
Check the kicks under my thighs
Surprise, I just banged all over your center
It's flick time; you stand, I'll deliver

I dont think I've ever been as excited about a UT Recruit--in any sport--as I am about Avery Bradley. I've been excited about many, many, many, many recruits during the last decade, but all of these feelings have come in different ways than how I feel about Bradley. In being excited about Kevin Durant, this feeling was tempered by the realization that the roster would contain seven freshmen. In being excited about Vince Young, I knew he was going to redshirt and might sit behind Chance Mock for a bit after that. With Avery Bradley, there are no such reservations. I simply cant imagine a superstar recruit fitting in more perfectly with the current championship caliber team, program, and coach.

In attending the Basketball Banquet two and four years ago, I listened to Rick Barnes repeatedly mention--in rather strong terms--how he simply cannot tolerate players who dont "get after it" on defense. Rick Barnes will be able to tolerate Avery Bradley. The attitude espoused by Ice-O above could very easily be written about Avery Bradley, but, unlike many "max effort" players, Avery Bradley isnt David Eckstein or Darin Erstad. He's a superstar talent and the top-ranked player in the country, who just happens to play basketball (especially defense) like his life depended on it.

At this point, we know what Avery Bradley is going to bring to the table for this program. He is an absolutely complete player at a position the team has lacked completeness for several years. This is a match made in Heaven. 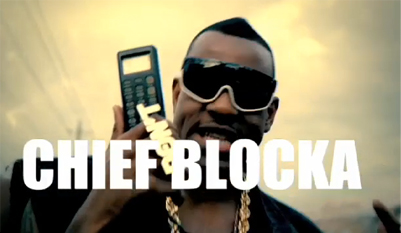 Chief Blocka is the one character in the commercial who doesn't get his own verse. He simply sings the hook and stays in the background for 95% of the video. With Damion James entrenched as a starter and Dexter Pittman making his claim to be an All-American, this season wont be Alexis Wangmene's time to shine. He'll mostly stay in the background and sit on the bench. However, with Pittman's conditioning and penchant for getting into foul trouble remaining an ever-present concern, there will be many minutes and situations where the grab bag of Wangmene/Hill/Chapman will be asked to step up and perform.

Many fans have forgotten about Alexis Wangmene, who had a rough year last year, on both a personal and professional level. After dealing with a family tragedy, the long-armed sophomore only played a handful of games last year before being shut down for the season with a knee injury. While he wont be a Hyperizer on the level of Brown/Hamilton/Bradley, here's to hoping that Wangmene can solidify himself as a contributor in the frontcourt rotation.

Each of the players listed here has the chance to Hyperize the UT Basketball roster in similar ways to the rap personas from the video. To wrap this up, let's look at the hook from the video:

Sounds about right to me...keep hatin', haters. And, yes, it will be fun...every time we play.