This isn't the way anyone wanted the front-runner Heisman status for Colt McCoy.

So Long, Heisman. Let's get this out of the way: If Sam Bradford's shoulder sprain knocks him out of multiple games, he will not repeat as the Heisman winner. The award relies too heavily on statistical exploits, and Bradford will not have the time to accumulate them. With this, and with Tim Tebow's flash-free performance against Charleston Southern, Colt McCoy becomes the Heisman front-runner. He's a statistical dream with the asinine "He deserves one because he hasn't won one" hype behind him, after all: The combination of production and attention will wrap McCoy in the prestige the Heisman loves.

Quarterback Jerrod Johnson was magnificent, completing 31 of 41 passes for 349 yards and two touchdowns. With plenty of help, the junior engineered the majority of A&M's 606 yards.

That was a school record for most yards in a season opener, and the most yardage gained by A&M since a 714-yard showing against SMU in 2005.

A good receiver is a terrible thing to waste. Mike Sherman is using Ryan Tannehill in third down situations.

Bottom line, Tannehill playing receiver might mean the difference in the Aggies winning one or two more games this season (and thus play in a bowl for the first time under Sherman). It certainly looked the part on Saturday -- and it's hard for Sherman to pass up the lure of a couple of 6-4 monsters (Fuller and Tannehill) at receiver.

The Pokes are dreaming big. A 7-0 start? Fair warning: A trap could be on its way.

The Cougars come in with Case Keenum — an experienced, talented quarterback — leading an explosive offense, which averaged 40.8 points per outing in 2008.

"I told the team this, ’The next game will be the toughest for us,’" coach Mike Gundy said. "They need to enjoy (Saturday’s win), and then they need to get ready. Because this team coming in here next, they’ll be ready to play. (Houston) won’t be concerned with our victory tonight."

The University of Houston's downside? Defense.

Why Houston could lose: As good as its offense is, the defense is sub par. Houston finished 91st in scoring defense (30.9 points per game) and 100th in total defense (413.5 ypg) in 2008. And don’t forget, they will have to deal with Zac Robinson, Dez Bryant and Kendall Hunter on Saturday.

"Four years ago," said OSU coach Mike Gundy, "everybody would have been in the tank.

"I didn’t see anybody flinch."

On the sideline, Young and his players calmly regrouped. And the Bulldogs didn’t reach the end zone again.

Maybe now the Cowboys can move on from that loss to Oregon.

Consider those demons — haunting since a fourth-quarter beat-down by Oregon in the Holiday Bowl — slain.

The Cowboys nearly pitched a second-half shutout, allowing only a 53-yard field goal. And they played physical on both sides of the ball against a rugged Georgia team that prides itself on being physical.

"We were able to put the Oregon game to rest," Gundy said.

Yes, you can buy a football program. 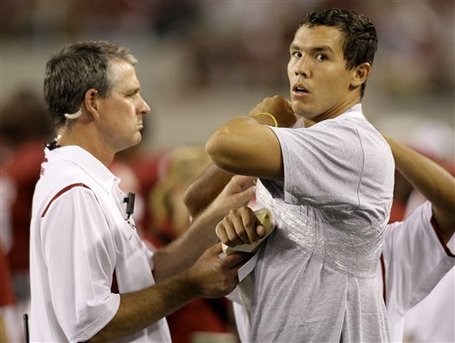 Sam Bradford's injury will have a big impact on college football.

The impact went far beyond the Big 12 South to a crowded Heisman race and possible national title implications. With one loss, Oklahoma's BCS hopes look about as good as Bradford's right arm did Saturday night in a sling.

Hall pointed out he suffered the same injury in the same way two years ago, but played the following week.

"I had a third-degree AC (joint separation) a couple of years ago and was able to come back and play," Hall told The Oklahoman. "Hopefully he can get that thing healed up and continue the rest of their season."

Bob Stoops defends his decision to go for a 54-yard field goal.

Way's first college field goal try was both short and wide left. Still, he was no culprit for the Sooners' 14-13 loss Saturday night against Brigham Young at Dallas Cowboys Stadium. It was a lot to ask of any kicker, let alone a freshman.

Had he faced fourth-and-9 instead of fourth-and-14, Stoops said he probably would have asked backup quarterback Landry Jones to make a play.

But before OU's snap on third-and-9, right tackle Cory Brandon was flagged for a false start.

This is stating the obvious. The Sooners really miss that 2008 offensive line.

Turns out, those departed offensive linemen who protected Sammy B. so well — Duke Robinson, Phil Loadholt, Brandon Walker and Jon Cooper — were not so easily replaced after all.

The Sooners scored just 10 points with Bradford, before he went down and out on the first half’s final play from scrimmage, and the O-line’s troubles — rampant penalties, no blowing BYU off the ball — continued in the second half, when rookie Landry Jones needed all the help he could get.

The experienced players were the biggest disappointment.

"I am very surprised. Our preparation, the way these kids have worked… To transfer from where we came off the field Thursday where our coaches said, ‘Man, that was one of the best practices we’ve had in a while,’" Wilson said. "I thought camp was great. And to play that way is not expected. It’s unacceptable."

The smartest man in America right now seems to be Andre Ware. The former Houston Heisman winner turned ESPN analyst said not only will OU lose 4 games this year, one of them would be to BYU. Right about the latter, time will tell if he’s also correct on the former. But Ware was on target about why there should be cause for concern: an untested offensive line.

Here's an update on Bradford's injury.

All indications are that Bradford's separated shoulder sustained in Saturday's season-opening loss to Brigham Young will keep him out no more than 3-4 weeks.

What about Jermaine Gresham?

Gresham was walking the sideline without the use of crutches during Saturday night’s loss to Brigham Young, but Oklahoma has remained tight-lipped on when to expect the senior tight end’s return. The only official word on Gresham is cartilage damage in his knee, but the coaching staff has alluded to the All-American’s "options" while eluding a definite timeline.

So far so good. Mark Mangino talks about his linebackers.

On Sunday evening, Kansas coach Mark Mangino praised the play of the unit — which featured only two collective starts prior to Saturday’s game — but also indicated it had significant improvements to make before the start of Big 12 conference play Oct. 10.

"They got themselves in some positions where they over-ran some plays, and they just got to do a better job with pursuit angles," the coach said. "They also need to work a little bit more at getting better fits in the run game."

Everyone's talking about Mizzou's win against Illinois, but Gary Pinkel is cautious.

Exhilarating as Mizzou's 37-9 surprise clobbering of Illinois on Saturday at the Edward Jones Dome was for MU fans, it will take the season ahead to confirm the ratio of Tigers prowess to Illini ineptitude.

"I would not judge (Missouri) after this game," MU coach Gary Pinkel said warily.

Cautionary tales of seasons gone awry after promising opening wins could be used by Pinkel to make the point with a team surely now engulfed in a wave of confidence — and perhaps susceptible to overconfidence.

Things don't look good in Colorado. Both backup quarterbacks plan to redshirt this season. On top of that, the Buffs lost their opening game to Colorado State.

Does Dan Hawkins deserve the blame for a lackluster beginning?

Similar good vibes hovered in the stadium parking lots in the hours before the evening game. The cardinal-clad fans knew their team had a 10-game losing streak, yet the crowd of 48,831 was ISU’s largest for a home opener since 1987.

It seems as simple as this: Cyclone fans are excited about Rhoads being their coach.

In nine months on the job, Rhoads has made an indelible impression on his players, their families, and the ISU family. Simply put, they like him. Perhaps as importantly, he likes them back.

There is more to come. Next week the Cyclone headsets will work.

Rhoads, however, said part of the reason his offense sputtered a bit after its initial drive was due to the fact his coaches' headsets didn't work for most of the first half. The Cyclones' no-huddle attack, he explained, relies heavily on being able to make adjustments at the line of scrimmage, which coaches typically facilitate.

"When we go right down the field and score like we did, without headsets ... it was a great effort," Rhoads noted.

The Red Raiders got mixed reviews in their opener against North Dakota.

Tech beat North Dakota 38-13 at Jones AT&T Stadium, but not before
allowing the Fighting Sioux to be within two scores for most of the fourth quarter. And unlike some of the previous sacrificial lambs Tech has routed, North Dakota has just in the last two years moved from the 36- to 63-scholarship level that separates NCAA’s Division II from the Football Championship Subdivision (formerly Division I-AA).

Red Raiders.com has a report card.

They won where it really counts. The Bears won in the trenches.

Based on what quarterback Robert Griffin & Co. showed against Wake Forest, the Bears should win more than two games against league opponents. Expect a bowl bid for these Bears, who are much-improved in the trenches this season.

"We won the game at the line of scrimmage, without a doubt," coach Art Briles said Sunday. "It was a huge win for us, program-wise. ...We dominated up front defensively and that’s how you win football games." 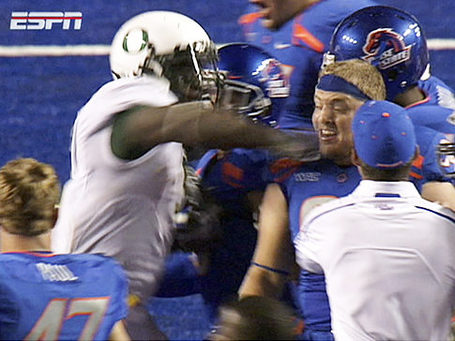 What do Sam Bradford's shoulder and Oregon's LeGarrett Blount's right fist have in common? They have dramatically changed the season.

The calamities caused by those two body parts conspired to overshadow the two biggest victories of college football's opening week.

Because Oregon running back Blount blew up in Boise and Oklahoma quarterback Bradford broke down in Dallas, Boise State and Brigham Young didn't get full credit for knocking off high-profile teams from big-six conferences.

So soon? Dennis Dodd has a Hot Seat ranking.