We're No. 2! We did not move in the polls after that bang-up job against ULM. (The Pokes are slowly creeping up on us.)

There were a few injuries in the first game. And then there were those other issues...

The second-ranked Longhorns already know they'll be without two starters for Saturday's game against Wyoming, thanks to news provided Monday by the Texas training staff.

There's also a real possibility that three more players will be unavailable for the second game — and maybe the rest of the year.

So count on the practices this week to be used to ready younger players for early action.

"We need to build depth, so when we get into an injury situation, they can be prepared to play,'' said Texas defensive coordinator Will Muschamp, who will try to patch holes at the linebacker and defensive secondary positions.

The Horns are focusing on ball security.

Mack Brown said videotape reviews showed tailback Vondrell McGee was not sloppy with his ball-protection skills in Saturday's 59-20 victory over Louisiana-Monroe despite two lost fumbles. Those turnovers broke a streak of 17 consecutive games without a lost fumble by a Texas running back. Although McGee remains listed as a starter, Brown said: "When you have it knocked loose twice, there's something wrong. He's got to do a better job of carrying it."

Sam Acho has brawn and brains.

But it's not as though the junior defensive end has merely stumbled into his success. The son of a Nigerian-born North Texas psychologist, Acho enrolled at St. Mark's, a private school in Dallas, in the second grade, thinking he'd someday attend Harvard.

But while his grades flourished just as his parents had hoped, so did his physical stature. He and his younger brother Emmanuel — now a UT linebacker — became dominant athletes, and in his sophomore year, he received his first football recruiting letter from TCU.

"That's when I started thinking, ‘OK, this might be a pretty cool opportunity,'" Acho said.

Fox Sports has a Texas-Wyoming preview.

The 2009 Davey O'Brien Award voting is up and running. Go vote.

More love for Florida and USC. College Football News put out their bowl predictions. They have us in the Sugar Bowl.

We were happy to help. ULM place kicker Radi Jabour was named Louisiana Special Teams Player of the Week. Jabour was a perfect 4-for-4 on his kick attempts in the Texas game.

Some Aggie freshmen had a good day against New Mexico.

Texas A&M's newcomers did some impressive talking with their actions Saturday night in a 41-6 victory over New Mexico, and we're discovering they're witty as well.

The Pokes sent a message.

The national pundits heard the message loud and clear, too.

In the days following the win, several national analysts have made it clear OSU is poised to become a BCS title-game contender.

OSU may have the toughest game in the conference this week.

Oklahoma State has perhaps the toughest task in the Big 12 this week when it plays host to Houston, the favorite in its Conference USA division.

"As a coach, you always worry about the next game," the Cowboys’ Mike Gundy said. "We put so much into this last one."

Sam Bradford wants to be back in 2-4 weeks.

Injured Oklahoma quarterback Sam Bradford said Monday he hopes to be back on the field in 2-4 weeks and has ruled out surgery as an option to mend a third-degree separated shoulder in his throwing arm.

"It feels a lot better," he said. "It’s not nearly as painful as it was Saturday.

Brody Eldridge is once again practicing at tight end.

Fun stuff. Grown men chasing after 17 and 18 year-old kids. ESPN's Tim Griffin has the 10 best closers in the Big 12.

Paul Rhodes is talking chicken wings so it must be time for Iowa State to play Iowa.

That's what Cyclone coach Paul Rhoads mentioned Monday when talking about big-game rivalries in which he has been involved.

"It's a competitive and friendly rivalry," Rhoads said of Saturday's 11 a.m. game at Jack Trice Stadium. "You're going to see people on both sides in the parking lot eating chicken wings together."

Both teams are 1-0, Iowa State after Thursday's 34-17 win against North Dakota State, and Iowa after Saturday's 17-16 escape of Northern Iowa.

The 22nd-ranked Cornhuskers beat Florida Atlantic 49-3 on Saturday, but Pelini made it clear the performance he saw won’t be good enough when the big games arrive.

"Overall, man to man, I thought we played soft at times," Pelini. "We’ve got to get that fixed."

Missouri's defense is fast and talented.

Steckel realized that he had so much talent at defensive end that it didn’t make sense not to play his best players together. So along with starting defensive ends Jacquies Smith and Brian Coulter, redshirt freshman defensive end Aldon Smith was added to the mix at defensive tackle.

Aldon Smith was the most productive of Missouri’s defensive linemen, producing a sack and six tackles, including three for losses. He saw action at both end and tackle and continually harassed Illinois quarterback Juice Williams.

Someone at Sporting News is very bearish on Baylor. The Bears even received votes in the national polls.

On the strength of a season-opening 24-21 victory at Wake Forest last Saturday, Baylor football received votes in both national polls released Tuesday. The Bears received 17 votes in The Associated Press Top 25, the 38th-best tally, and two votes in the USA Today Coaches' Poll, the 44th-best total.

This marks the most votes Baylor has received in the AP Top 25 since the third week of the 1998 season; that year, the Bears opened with a loss at Oregon State, defeated North Carolina State at home, and received votes the following week. Baylor last received votes in the coaches' poll on three occasions during the 2005 season.

A couple of Tech players mentioned fatigue might have been a factor Saturday night. Kickoff came not long after afternoon highs climbed into the 80s.

Asked about a fatigue factor, Tech coach Mike Leach pointed out that North Dakota didn’t run many plays — 57 for the game.

"Well, they’re just going to have to cowboy up a little bit and play 57 plays,’’ Leach said with a chuckle. "You know, God forbid a football player should have to go out and play 57 plays at the ripe old age of 18 to 22. Now isn’t that something? I don’t want to hear anything about being tired.’’ 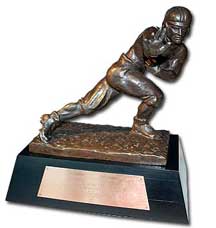 Here's the update from the Heisman Pundit. You know who is in the No. 1 spot.

Sam Bradford's injury clears the way for some other names.