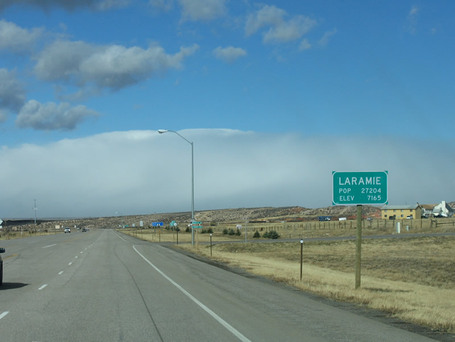 Welcome back folks.  We had a fun game on Saturday and a lot of things I predicted in ULM Offensive Preview came to pass, such as Luther Vandross Ambrose running amuck in our secondary to the tune of his world class speed.  Lucky for us, we have a few kids who can break the sound barrier with their speed.  In the sense that when Goodwin returns a kickoff for a TD, he doesnt hear the north end zone fans' cheers until after he kneels in the south endzone.  Sounds of those cheers from the cheap less-expensive section try to catch up with our little breakaway backs.  Aside from the miscues on the ground, the lack of a pass rush, and all of the OU mid-week drama...we still have a game to play this Saturday.  And guess what...its the best team we'll play all year
....from Wyoming.

I bring you the Fighting Cowpokes of Wyoming 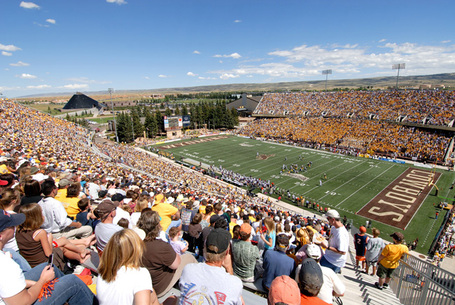 LET US KNOW THY OPPONENT!

COACHES OF THE LARAMIE LASSOS:

2008 Season brought in a 4-8 record with wins over Ohio, N. Dakota St., San Diego St., and Tennessee in a 13-7 duel.  That makes 2 Texas opponents in a row that have taken down SEC teams on the road recently.  Allsome.  Last year their head coach Joe Glenn had a very laid back approach to practices and actually spent most of his time in the bleachers talking to boosters rather than being on the field.  He was, in a sense, the exact opposite of Will Muschamp, as his boots never met his players' asses on a daily basis.  His coaching style showed on the field when the lights came on however, and finally the boosters got tired of talking to the guy and THEIR boots met Joe's ass for the final time.

--Head Coach--In comes Dave Christensen from Mizzou as the OC for the Tackling Tiggers of Columbia, to take over the head coaching job for Wyoming. Dave is completely revamping his predecessor's offense by bringing in the spread and also bringing in a no-nonsense, ass-kicking vibe in practices.  Many coaches have a key theme during spring and summer -- health.  Not so much for Christensen, as many of his players were hurt from the new tempo of practices.  I'm guessing those players were lulled by prior years of kissing ass, as it did not prepare them for the reaming they got when Dave came along.

--Offensive Coordinator: Marcus Arroyo. Dude, the Spaniard is young! Arroyo, an ex-QB for the San Jose State Whachamacallits, is the new OC for the Pokes.  He's just 6 years removed from his old QB'n days at The San Hose-A College and he will try to bring the "30-something (actually 29)-ass-kicker-type" coach that Christensen loves.  Expect Arroyo to awaken the near-dead offense of 2008 that ranked last in FBS in total offense and points scored.   They're gonna need a complete resurrection.

--Defensive Coordinator: Marty English. The guy is legit.  Somehow, he's helped put together a top-32 defense in each of the past 3 seasons at Wyo. This year, however, he will try as a first time DC and now everything is on his shoulders to keep pace as a top defense in the MWC (save TCU).  His 3-4 scheme has been in place for the past few season and it certainly has increased production.  The only concern is that with Wyo's new no-huddle spread offense, the defense will get a lot of time on the field this year, which will lead to fatigue.  English is a good guy with a great football IQ, but I don't expect his defense to fair as well in the stats department this year.  But then again, stats are for losers.

Hold up boys, the Cowpokes are undefeated this year!

The game is hard to decipher since it was against an FCS opponent, however on the better end of FCS opponents, very much unlike who OU plays this week...ouch.  However, there are some key things to take from the game:

Lets check out the Depth Chart for the Offense:--"THE FUSTER CLUCKED SIGNAL-CALLER LOGJAM"--QB'S
Who in the hell is the QB for this team? According to their roster they have 6-7 QB's.  QB's we will most likely face will be either Robert Benjamin and Austyn Carta-Samuels.  Carta-Samuels. Wow 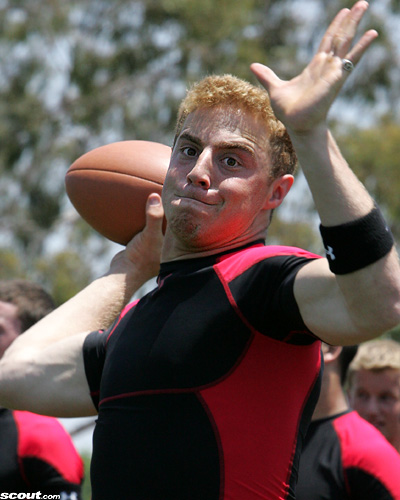 "Honey, will you run to Discount Tobacco and get me a Carta-Samuels please? Thanks sugar-tits!"

--FR Austyn Cart-o-Sammies, 6-2, 210 lbs. The kid can do everything right and has the tools to one day be a great QB at Wyo. Little undersized but has intensity and a live arm.  Inexperienced obviously.

--JR Robert Benjamin, 6-2, 205 lbs JUCO transfer from University of Phoenix.  Last year he was the NJCAA player of the year (their Heisman) while throwing for 2700 yards with 28 TD and just 5 picks.  More of a dual-threat type QB but can still throw the ball downfield. Most likely to start. Needs to work on accuracy.

--SR Karsten Sween, 6-2, 230 lbs. What a white-guy name. Karsten? Was his brother named Matisyn? Sween was the name of the program but lost his job last year due to completing too many passes to the other team.  Handled the spread well in spring practice but most likely will not see much playing time this season due to his inaccuracy.
(There are about 12 more QB's on the depth chart but to hell with that!)
----I grade the QB position at a (C-) because they have promise and skill, but very little experience.---

--JR Darius Terry, 5-11, 209 lbs. A breakthrough star in the making. He's got some wheels in the backfield and can be expected to make some catches as well.  Don't be surprised to see him lined up in the Wild-Cowboy QB position to change things up a bit against us.

--FR Alvester Alexander, 5-11, 200 lbs. Freshman sensation from Houston, had his first action against WSU this past weekend and marked up 81 yards on 8 carries.  Had a long run of 44 yards with a TD as well.  Expect him to split carries with Terry against us on Saturday.

--RsFR James Caraway, 5-11, 182 lbs.  This kid has some wheels! He will be used primarily as a scat back and catching from the backfield.  His 4.38 speed will certainly test out D as Luther Ambrose tested Chykie last week.  I'm sure Christensen was watching film of that burn.
----While their RB stable is more crowded than the QB, only a few will ever see playing time.  Of those few they seem to have the talent but once again lack experience.  After putting over 240 yards on the ground against on of the better FCS teams last week, expect Arroyo to try to establish the run quickly.  I grade this group out at a B---- 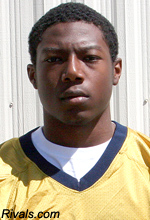 --SR Greg Bolling, 6-2 180 lbs. Never had the breakout game (what Wyo guy has?), but the potential is there.  He's a speedy/shifty guy with a good frame and decent hands.  He will be lined up in the "X" position on Saturday.  He didn't have a catch on against WSU, and I cannot find anything on him whether he will play or not this weekend.

--SO Brandon Stewart, 5-11 190 lbs. The kid will most likely be playing in the slot and using his excellent hands as a possession type receiver.  He had some trouble with injuries last year but had a great game against SDSU last year with over 130 yards and 1 TD (that's great for Wyo's standards)

--JR David Leonard, 6-4 200 lbs.  Well he certainly has the size, and had the best day of any WR's for Wyo last weekend with 87 yards.  Once again...he has the skills but not the experience.

--SR Jesson Salyards. 6-5 235 lbs. Flex TE.  Decent blocker, and second on team last year in receiving production.  He's a very physical player from the line and has the jets to get upfield to stretch the seam.  Hehe...stretch the seam.
---The other reserves are pretty much of a mixed bag of who's playing and who's hurt.  They're all the same guy, somewhere around 6-1 and 180.  Nothing too special considering this is the worst group on the team with little to no experience.  I grade this group out at (D-) due to their lack of true game changers on the edge and the fact that there isn't a QB who can complete 50% of his passes----

--SR Ryan Otterson, 6-5, 275 lbs LT.  The kid has a great motor and uses his hands very well at the point of contact.  He is by far the best O-Lineman for the Cowboys, and Scout even named him the Preseason Offensive Player of the Year for the cowboys this year.  That's not a good thing for your POPoTY to be your starting LT.

--SO Clayton Kirvin, 6-6, 310 lbs RT.  Good sized and athletic, this sophomore will get the nod at RT this year.  He was the top prospect in the state of Wyoming, which is out of a graduating class of close to 328, in 2007.  He started 11 games last season for the Pokes as a true freshman.

--JR Sam Sterner, 6-4 302 lbs LG.  Even as a junior, he still has room to grow as he put on an inch last season and has started every game during his eligibility.  He specializes in run protection and could help bolster an already stout left side of the line.  Possible ALL-MWC selection if he develops over the season.

--SR Russ Arnold, 6-4 290 lbs RG-C.  Able to play any position on the line, he is our version of Chris Hall minus the youth minister. He is most likely to start at Center but could move around if any injuries occur. His experience will make him the QB of the O-Line.

--FR Nick Carlson, 6-4 235 lbs RG. Very very undersized RG, but very athletic.  Expect to see him all over line once the ball is snapped acting as an extra running blocker.  The main reason other larger, more experienced guys are on the bench, is either beyond me, or a product of the offensive strategy needs.  Houston and Randall will destroy this guy.

----If the new offense gets off the ground, expect both tackles Otterson and Kirvin to be a HUGE part of the success.  The strength of this group is pass protection, however passing isn't the QB's forte.  Their right side is very undersized and could pose problems for teams with very stout DT's.  I grade this group out at a (B-) 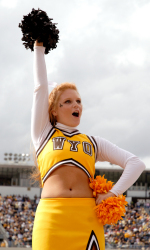 Meh...not so much.  Ours are better, but you knew that already.

After last year averaging only 12.7 points a game, expect the Pokes to kick it up a notch with Christensen's no-huddle offensive scheme.  Our Defense should hold them, but our secondary has to play better and we need to get some damn pressure on the QB.  A couple of turnovers and we should easily be able to control this game on the Defensive side of the ball.

Wyoming Defensive Preview coming tomorrow! Sorry for the delay guys, I spent the past 3 days buying me a new truck.  Hook em!