The State of Oklahoma: OSU vs. Georgia and OSU vs. Houston

Share All sharing options for: The State of Oklahoma: OSU vs. Georgia and OSU vs. Houston 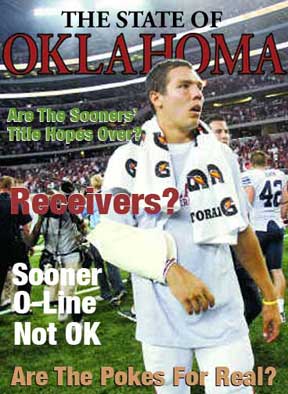 Lost in the shock and excitement of Oklahoma's loss, the Oklahoma State Cowboys earned an impressive victory for the Big 12. To be fair, the game was much less interesting than the OU game for some reason, but the Pokes and their fans are probably annoyed that OU gets more press even when they lose. So life goes.

In any case, Georgia came in with a #13 AP ranking, and the Cowboys were eager to avenge the thumping they received two years ago in Athens. I was able to watch the first half before I headed to the stadium, and then I zipped through the second half on the DVR when I returned to my friend's place. Like I said, it wasn't nearly as fascinating as the Oklahoma game, but I came away fairly impressed with OSU's overall performance.

When I previewed this game, I noted that Georgia had a brand new, inexperienced QB and a few capable, but unimpressive, running backs. One of their strengths, however, was the offensive line, much like OSU, so it would be important for the OSU defensive line to control the line of scrimmage and force Cox to beat them with his arm. If Georgia was able to run successfully on the Pokes, I thought it could get ugly; Oklahoma State lacks depth at DT, and such success would make A.J. Green all the more dangerous.

The first drive? OSU had mild success against the run at first, as the Bulldogs' first two runs only gained three yards apiece, but a 29 yard pass to Green gave the Georgia offense the spark it needed. What followed were more runs, a penalty, and a touchdown pass from Joe Cox. The drive lasted 10 plays and traveled 80 yards in 5:18, and seven of those plays were rushing plays that averaged 6 yards per carry. The following OSU drive saw Kendall Hunter gain two yards on three carries, and the Pokes had to punt. Uh oh. I'm sure SEC viewers were smirking, thinking that the conferences' respective defensive reputations would hold true.

However, on the ensuing Georgia drive, Perrish Cox broke up two straight passes to force a punt, and after that, OSU's defense seemed to come alive. For most of the first half, both offenses were rather pedestrian and struggled to find a groove, and it was surprising because while OSU's offense struggled, their defense kept them in the game. Who would have thought that? Georgia could not get anything going for the rest of the half and pretty much for the remainder of the game. Let's look at each unit:

The D-line took control of the line of scrimmage after the first drive, and Georgia was bottled up on offense. The line had four TFLs and two sacks, 1.5 from defensive tackle Shane Jarka and the other 0.5 from redshirt freshman Nigel Nicolas, which is good news for a team that could not sack the quarterback last year. While Georgia lost their offensive tackle Trinton Sturdivant (again), I was still impressed with how the OSU defensive line played. They weren't perfect, but they held Georgia to a pedestrian 3.8 yards per carry. The play of the defensive tackles in particular is great news for the Cowboys (Jarka also had a forced fumble that practically iced the game), being one of their main question marks going into the season.

Neither Jeremiah Price or Ugo Chinasa, the two who aspire to have 10 sacks, notched a sack, but they played fairly well and brought some decent pressure, I thought. After all, we're not judging Sergio Kindle for not getting a sack on Saturday and we played a much weaker team.

This was to be the strength of the OSU defense before Orie Lemon was lost for the season. Their tackling was a bit shaky at first but they settled down after that, and they were actually fairly decent in coverage. Linebacker Patrick Levine had a pick and broke up two passes, while Donald Booker had five tackles and broke up a pass as well. They did a good job covering the middle of the field and staying in their run lanes.

The secondary played surprisingly well. Senior cornerback Perrish Cox broke up four passes, including a couple to A.J. Green. Senior Lucien Antoine also had a solid game, and his TFL as impressive, avoiding the lead blocker to stop the runner on a third and short. Georgia showed a lack of weaponry saved A.J. Green, and he was held to only 52 yards on 4 catches, and you have to give credit to the OSU defense for that. The secondary was much more aggressive and decisive than I remember them and it will be interesting to see how they fare against Houston's high powered attack.

I will give credit where it is due; while Georgia had a very, very unimpressive offense, the Pokes showed up to play on D. They bottled up the run game, limited A.J. Green, and forced Joe Cox to make plays, which he didn't. He finished with crummy numbers: 15/30 for 162 yards, 5.4 ypa, and 1/1 TD-Int ratio for a QB rating less than 100 (which is bad in college, by the way). Georgia's main back, Richard Samuel, got nothing going after the first drive, and he finished with only 87 yards on 20 carries. After all, it took the Cowboy offense almost an entire half to finally get points on the board, and throughout that time, the Bulldogs couldn't do anything on offense.

Not a great day for the Cowboy offense, but they won, so who cares, right? We'll take a look anyway:

As I stated in my preview of the O-line, Oklahoma State sports the second most returning starts in the Big 12, behind only Texas. As OU's fiasco last Saturday showed, that is usually pretty helpful when you're trying to, you know, keep your QB healthy and win. It was important for this line to win the battle at the line of scrimmage to jumpstart their offense. The results? Mixed.

When discussing Georgia, I mentioned that while their defensive tackles looked strong, they were a bit thin at DE. Furthermore, Oklahoma State's experience rests solely with their tackles and center and not with their guards. Perhaps this is why Georgia failed to sack Zac Robinson but Okie State had little success on the ground. Kendall Hunter struggled to find openings and finished with only 75 yards on 23 carries, and as a whole, the Pokes did even worse than the Bulldogs on the ground. They did not give up any sacks, at least, but the line's performance as a whole was slightly disappointing compared to the hype.

Quarterback Zac Robinson was a bit out of sync. He got lucky that several of his throws weren't picked off, and he had trouble picking up yards with his legs as well. Overall, he finished with with 11/22 for 135 yards, not much better than Cox, although he did have two touchdown passes. His best throw of the day was the bomb to Dez Bryant; I was impressed with the arm strength on the throw, and he put the ball in a great place for Bryant to make the play. Other than that, however, Robinson was pretty average.

Kendall Hunter, as I noted above, struggled to get anything going, and Georgia did a great job keeping track of him and not letting him get loose. Tost0n had more success on the ground, averaging 5 yards a carry, so while Hunter will always get the most publicity, it is very helpful that the Pokes have Keith Toston to change things up a bit.

I thought Dez Bryant played relatively well, although he was quiet much of the game. His big criticism is that he disappears in big games, and at first, it looked like that way again. He got blasted on one throw and it initially looked like the Georgia defense was going to bully him around. However, he started and finished the big touchdown drive that tied up the game, grabbing a 19 yard first down pass on third and long and then finishing with an impressive, over-the-shoulder diving catch in the endzone. On that play, he absolutely burned the Georgia safeties, and that play woke up the crowd and gave the Pokes the momentum they needed. Other than him, however, I was very unimpressed with the other receivers, and their receivers after him remain a question mark.

Oh, and the tight ends? Decent. Youman caught a big 23 yard pass and Horton caught a key pass to set up a 4th and 1, which Kendall Hunter converted. Zac Robinson would eventually run it in for a touchdown, and that score put OSU up 10 and they never looked back.

Are the Pokes for Real?

We will see in the coming weeks, but for now, Oklahoma State really does look dangerous. The way this game went may even be the most encouraging thing possible for Cowboy fans; with the offense struggling in many parts of the game and the Cowboys sloppily committing a whopping 15 penalties, it was the defense that held the fort. The offense will most likely pick-up the production, and if so, the Pokes may sport a more balanced team than the spoilers in Lubbock last season.

However, it is not quite that easy. They still have real questions at wide receiver after Dez Bryant. Their guards still need to step up, and it remains to be seen how much Zac Robinson misses do-it-all TE Brandon Pettigrew. While their defense looks improved, their offense may have taken a step back. Furthermore, Georgia didn't exactly sport a great offense, so we will know much more about this Cowboy defense in later games.

Next week, they go up against Houston. In my preview of the OU-BYU game, I mentioned this game in passing and probably dismissed Houston a bit too easily. UH has a dangerous offense, and it will be a very good test case for the OSU defense. It's not even out of the question that the Cowboys lose this game, coming off a high of beating Georgia and being caught by surprise by a determined and offensively capable team. I don't expect them to lose at home, but it will be a game worth keeping track of if you can.

What does this mean for us? I have the same uneasy feeling as I did about Lubbock last year. Like Lubbock, strange things always seem to happen when the Horns are in Stillwater (or really, playing OSU anywhere), and streaks can't last forever. I have not yet written off OU, but OSU is going to be an interesting challenge whether they lose a game before they face us or not. I really wish that game was in Austin, but if you want to win championships, you will have to win big games on the road and/or on neutral fields. (right, Tech?)

Anyway, time for a fun poll. Do you think Houston has a shot to derail the Cowboys' dream season before it begins?