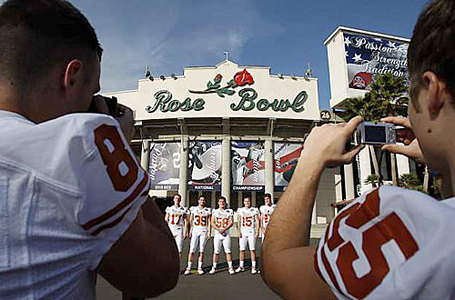 Colt McCoy could not be cleared by trainers to return to the game.

"The weakness in his shoulder also put him at risk of greater injury. From the time of the injury, we were continually treating and re-evaluating him, but he wasn't able to regain the strength he needed to get back on the field."

About that shovel pass...

"We knew we were going to struggle with points, and we felt like we had 15 seconds left so we called the safest thing that might squirt. We called a little shuffle pass that I had never seen intercepted before, and I certainly hadn't seen it intercepted for a touchdown. We felt like we had great receivers, and Garrett had a strong arm. We were at about the 40. So we were going to try to run down 10, 15 yards and then take a shot in the end zone. That's what we were trying to do."

Garrett Gilbert is our future.

But the freshman quarterback, who threw more passes against Alabama (40) than he did in the Longhorns’ first 13 games (26), showed poise and resiliency during a second-half rally. Forced into action because of a shoulder injury to starter Colt McCoy, Gilbert threw two second-half touchdown passes and had a chance, with 3:14 remaining, to lead a potential game-winning drive that could have erased a 24-21 deficit.

However, even after finishing No. 2 in the nation in both major polls with a 13-1 record, Mack Brown should also take an insight from the disappointing, 37-21 loss to the Crimson Tide: Texas needs to drastically improve its running game.

I'm too sad to write anything. You will just have to read the article.

Did you think the Horns would just roll over? 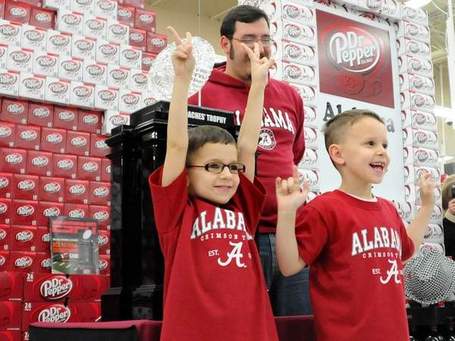 This is all we need to know about Alabama. They display their national championship trophy at WalMart.

Kansas couldn’t find its composure in front of 21,936 screaming Tennessee fans at a sold-out Thompson-Boling Arena, which was hosting a No. 1 team for the first time. The Jayhawks turned the ball over 16 times, while Tennessee (12-2) had only eight turnovers.

The loss leaves No. 2 Texas and No. 3 Kentucky as the only unbeatens in Division I and it was the fourth this weekend by a Top Ten team, joining No. 4 Purdue, No. 5 Duke and No. 8 West Virginia.

At least he didn't lock the kid in a dark room. Kansas State coach Frank Martin hit a player.

Caught up in the heat of a tight road game, Martin hit senior Chris Merriewether on the arm with the back of his hand late in a 74-68 loss to Missouri for Kansas State (No. 10 ESPN/USA Today, No. 11 AP). Martin wasted little time in apologizing, telling reporters he was wrong before taking questions during his postgame news conference.

"That's a mistake on my part," Martin said. "I'm an old-school guy, but I understand the times are real sensitive now. I love him. I don't know what to tell you. It's wrong on my part and is completely out of line and has no part in the game. I need to apologize for that."

The Sooners have no idea who they are.

Based on its nonconference performance, Oklahoma’s basketball team is searching for an identity.

Tommy Tuberville will be roaming the sidelines in Lubbock.

"He’s a great coach and I’m just really ready to get this next page in Tech history turned," Batch said before boarding a plane in Lubbock to attend Saturday’s Philadelphia Eagles-Dallas Cowboys playoff game. "I’m sure everybody is just relieved and ready to push forward.

"I’m just glad that they named a guy. I’m really excited to play for Tuberville."

"We’re going to air it out,’’ Tuberville said. "We’re going to keep the ‘Air Raid.’ I think it’s something that Tech has hit upon that gives them that identity to recruit and we all want to have.’’

Even if the former Auburn coach weren’t comfortable with the wide-open passing game, he said he’s smart enough to know it resonates with recruits.

"Most of the time, the good players across the country can recognize Texas Tech from one thing, and that is the ‘Air Raid’ — throwing the football, making big plays and being exciting,’’ he said. "And so we’re going to continue that.’’

Red Raider fans better stay in their seats during the game.

Calling himself a riverboat gambler, Tuberville said fans and players should not be surprised when he takes chances.

"I do it for momentum," he said. "I like for the fans to understand, if you go on a punting down to get your a Coke or a bag of popcorn, you might miss something that’s going to be fun."

Double T Nation likes what they see in Tommy Tuberville.

One of the first things you'll read about Tommy Tuberville is that he's going to be a CEO head coach.  There's certainly some truth to that as Tuberville will engage in the hand-shaking and necessary rounds of golf with boosters.  But to label Tuberville merely as a CEO isn't accurate.  Tuberville trained some of the best in the business, including UT's Will Muschamp (for one year), Iowa St.'s Paul Rhodes and current Auburn head coach Gene Chizik.  I can't help but think that Tuberville didn't teach these gentlemen a thing or two about defense.

The pirate takes another shot at Tech.

Court documents filed Friday said statements from university administrators "were made intentionally" to harm Leach and expose him to financial harm.

It is ok to be tough, but there are lines you just don't cross.

Thirty-one years ago, the moment tumbled into America's living rooms without warning. There it was - live and in color - a college-football icon losing his mind.

Enraged when his team committed a turnover, Ohio State University coach Woody Hayes punched an opposing player near the Gator Bowl sideline. The next day, Hayes was fired.

"I couldn't believe what I was seeing," said Grant Teaff, then head football coach at Baylor University.

The job of coach has changed.

Missouri lost $30,000 on last year’s Alamo Bowl trip and broke even on the Cotton Bowl two years ago.

More irrational thought from Lubbock. Hitler is a Longhorn and unhappy about the Tuberville hire.