What Went Wrong, Part I: Colt and the Speed Option

Share All sharing options for: What Went Wrong, Part I: Colt and the Speed Option

Apologies once again for the lack of content over the three days since the game -- I had neglected for my girlfriend for some time and that just wasn't going to fly any longer. I'll jump back in now with some pieces on what wrong before focusing on the positives going forward with Garrett Gilbert. --GoBR--

"LSU picked up some yards on the speed option against the Tide, but the Longhorns don't run the play much and McCoy doesn't seem to have a great natural feel for it. Probably not much of an option." -- From the Five Things to Watch Against Alabama post completed just minutes before the game.

Apologies for quoting myself, but the point is highly illustrative -- the Longhorns have run the speed option easily fewer than 15 times this season and probably less than 10. In other words, it's not something Texas gets a lot of game repetitions with and the strange thing is that Davis probably called the play more often before the Oklahoma game when Colt McCoy was running the ball a little more than five times a game (sacks excluded) than after OU, when McCoy just about doubled his rushing attempts.

Running the zone read is pretty easy for quarterback because the read itself is extremely simple, but running the veer or Wishbone took and still takes a quarterback with the ability to make consistently good decisions extremely quickly. Pure athleticism is a necessary aspect of the position in such an offense, but far from the only requirement, or even the most important requirement -- Super Bill Bradley may have been one of the five most athletic players on the 1968 football team, but James Street was the much better fit for the newly-installed Wishbone because he made better and quicker decisions than Bradley, who seemed to have no intuitive feel for the offense.

All that is a long way of saying that such an intuitive feel is paramount in running a play such as the speed option. My sense before the game was that McCoy, for whatever reason, did not have the intuitive sense for the play. I wish I was wrong.

Let's take a look at what happened on the fateful play. 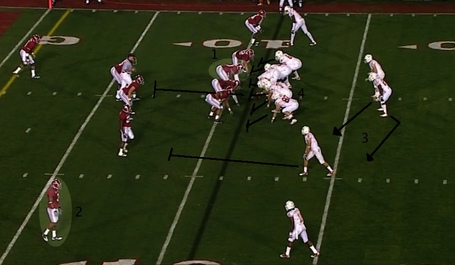 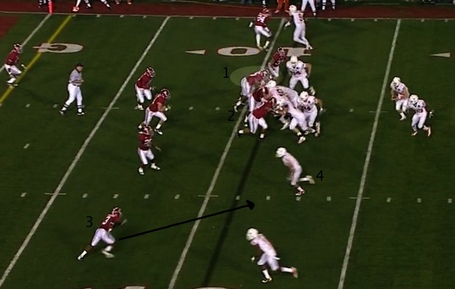 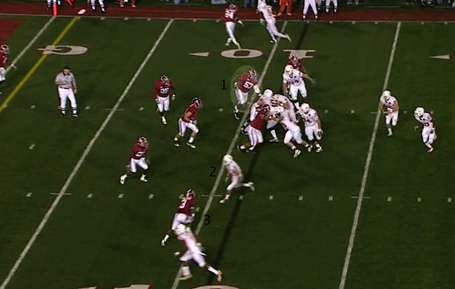 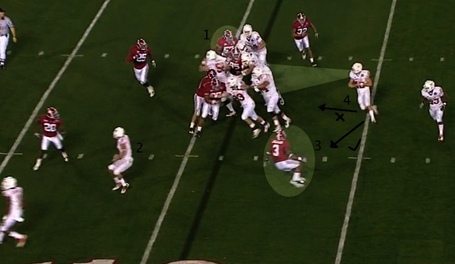 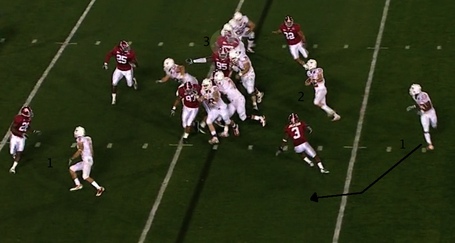 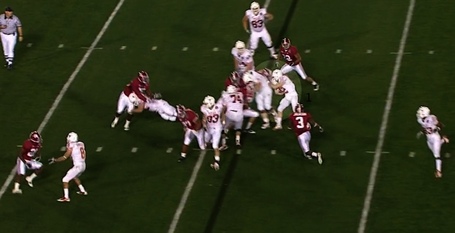 McCoy falls to the ground, his Texas career over.

Video of the play here (will not embed for some reason).

Given McCoy's consistent inability to run this play well, Greg Davis deserves some blame for the eventual results, but the great majority of the responsibility falls on McCoy himself -- the play still should have worked had McCoy executed it correctly and should have even picked up good yardage. While there was certainly a great deal of bad luck involved that the hit landed on the perfect spot to render his throwing arm useless for the remainder of the night, this is McCoy's fault -- he made his own destiny when he failed to attack Jackson and slowed down. Dareus never should have had a chance to make a play.

McCoy had a chance to define his legacy on this night, vaulting himself into the pantheon of the all-time greats at Texas with a victory, a chance to place his name with Bobby Layne and James Street and Vince Young as the best quarterbacks to ever play at Texas. Instead of running towards that destiny, he stopped, paused, never a smart decision on a football field where extremely large men fly around at incredible speeds. He stopped, paused and let his ability to define his own legacy slip from his hands. He stopped, paused and lost control of his own destiny, the goal towards which he had worked for the great majority of his life. And in the process, he probably did define himself -- always good and sometimes great, but never consistently great enough. Almost, but not quite. So close, but separated from true greatness by a wide chasm.