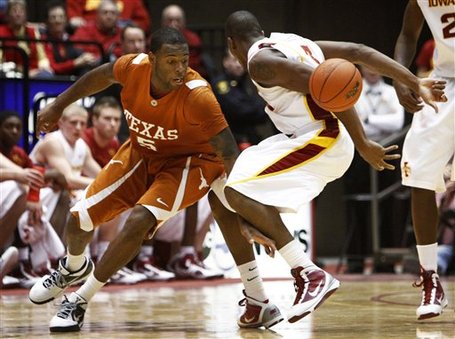 We are still No. 1. The Horns beat Iowa State 90-83. (Box score) The Cyclone head coach was impressed by Avery Bradley.

There's an All-American guard at Kansas, and a prospective NBA lottery pick in Oklahoma.

But McDermott, after losing 90-83 to No. 1 Texas on Wednesday, said, "Avery Bradley, from what I've seen, is the best guard in this league."

The Cyclones put up a good fight.

"I’m proud of the way our team competed," Iowa State coach Greg McDermott said. "It’s the start of the second half that was the difference in the game."

The Aggies come to town Saturday.

Speaking of the Fignting Farmers... I Am The 12th Man gives advice to the lovelorn.

Apparently, at texas they aren't taught that when you are having an argument with a girl that is loud enough to attract the attention of apartment management and necessitates calling the police, you should just shut the hell up and leave the premises when asked to by the police. Better to continue the argument another day than to go to jail.

Colt McCoy is fed up.

On a conference call today as he accepted the Manning Award, given to the nation's top quarterback, he answered any doubts about what the game meant to him.

"I'd do anything I could to get on the field," McCoy said. "For people to say that, they have no evidence of anything."

Will we see some big changes in the Big 12?

Every season, college football teams must fill voids from the previous year.

But the gaps that need filling for Big 12 teams in 2010 loom larger than in most off-seasons.

A&M's Von Miller is returning for his senior season.

College sports ain't nothing but a big hustle.

I don't have a bunch of hateful adjectives for Kiffin. Instead, I'd like to thank him, because with this bold -- albeit shady -- move, Kiffin has confirmed what a cesspool big-time college sports have become.

It ain't nothin' but a hustle, folks.

Are big-time college athletics worth the cost?

Faculty unrest is growing elsewhere, too. At California, the faculty has protested the university picking up a $5.8 million loan to cover athletic debt. At Texas, the faculty passed an informal resolution protesting football coach Mack Brown's $2 million raise to more than $5 million a year.

Such salary increases can be hard to stomach as well. On average, major-college football head coaches received a 46% increase in pay between 2006 and 2009, making the average salary $1.36 million. While most schools claim that money is not part of the university's subsidy but comes from shoe and apparel, broadcast and other contracts, it's more money that doesn't go to university coffers.

2009 was the year of dangerous living.

Three coaches losing jobs for issues tied to the treatment of players, two lawsuits filed, a legend run off before he wanted to leave, a two-time national champion taking a leave of absence at age 45 for health reasons, Notre Dame's alumnus coach being let go, and, just this week, a stunning turnaround at Southern California, where Pete Carroll jumps to the NFL after winning 97 games in nine years and Tennessee's Lane Kiffin shockingly leaves to replace Carroll after just one season in Knoxville.

There's a fine line between commercialism and exploitation, especially when college athletes are involved. And Alabama's latest offering can certainly be considered questionable at best.

The school has been selling a football featuring the facsimile autographs of all the members of the championship team for $125.

That’s when it really hit me," said the OSU senior who has been part of the football program for two years and was a starting safety in the 2009 season.

Antoine grew up in Haiti and came to America in 2001. He still has family in Haiti and is a citizen of the country in the Caribbean. Antoine said he would box up some of his clothes and send them.

"A lot of people were homeless before that happened. Then they got hit with this," said Antoine during a press conference today on OSU’s campus. "I’m going to do what I can to help."