The whole completing passes thing didn't go particularly well for Garrett Gilbert for several possessions after entering the game for Colt McCoy. In fact, Gilbert only completed one pass in his first seven attempts, going for a loss of four yards, along with an interception. An inauspicious beginning, to say the least. Greg Davis' playcalling provided Gilbert with little help, however, as the Longhorns ran on first and second down on each of the first four possessions of the game.

For Nick Saban, that was no doubt a dream come true -- Muschamp is a philosophical clone of Saban and both love to stop the run on first and second down. Combine that tactical preference with the stout Alabama run defense and the half-assed Texas running game and Gilbert never had a chance, facing 3rd and 5, 3rd and 12, and 3rd and 15 on his second, third, and fourth possessions. By conservatively running on first and second down in a misguided attempt to help Gilbert settle into the game, Davis unintentionally put his quarterback in an even worse situation -- 3rd and long against one of the best third-down defenses in the country, a position in which even Colt McCoy would rarely have been successful in this game.

After another three and out and Gilbert's interception on third down on the following series, the Longhorns got the ball back pinned deep in their own territory and desperately needing a positive play to stem the swelling Tide, flip field position, which had been in the favor of Alabama for more than a quarter and a half, and give the tiring Texas defense a rest. The drive started about as poorly as the others had in the first half, with the Longhorns running the ball twice and picking up only five yards in the process, leaving Gilbert facing another 3rd and 5. 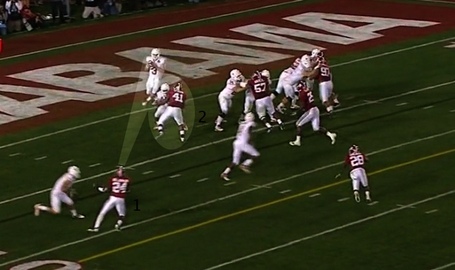 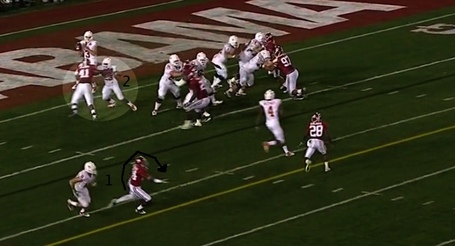 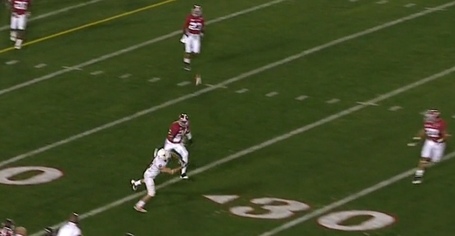 The ball is overthrown and Shipley must leave his feet in an attempt to make a diving, one-handed catch.

Shipley's effort is ultimately futile, as he cannot even get a fingertip on the football.

It's the perfect playcall by Greg Davis -- he no doubt saw on film the same struggles by the Alabama defense to defend both various slant concepts and double moves and decided to go for the best of both worlds by using a double move after showing a slant concept the Longhorns have run many times this season. Against a team coached up to tendency as well as Alabama, using double moves is one of the few ways to break big plays.

And this sluggo route to Jordan Shipley, the only read on the play for Gilbert, perfectly exploits the aggressiveness of the Alabama defense. The safety on the left hash responsible for that half of the field doesn't react quickly enough to the route to make a play on the ball. Unfortunately for Texas, Gilbert misses on this one.

In watching the replay from another angle, it appears that Gilbert and Shipley may not have been quite on the same page -- Shipley takes an angle towards the sideline that indicates he expects the ball to be put wide, away from both the cornerback and the safety attempting to get over the top. Instead, Gilbert throws it closer to the hash -- it's possible that if Shipley takes the angle Gilbert expects, then the pass is completed. Of course, if Gilbert puts the ball closer to the sideline and hits Shipley in stride, there's a chance he gets by the safety or at least has a one-on-one match up in the open field. The cornerback will not have an angle on the play in such a situation. Either way, the point is that Gilbert and Shipley simply don't have enough repetitions together to such a minor miscommunication that is the difference between a huge play and another disheartening three and out.

Greg Davis deserves commendation for calling the perfect play in this situation -- going into the game, Davis knew that he needed to save this play for a big moment in the game when it could have the most impact and picked the perfect time. The only flaw in his plan was that he did not adequately establish a rhythm for Gilbert by either passing more on first or second down or even having Gilbert throw a short, confidence-inspiring pass. It's also worth pointing out that after establishing a pattern of running on first and second down, the Longhorns never tried to hit Alabama with play action.

With that being said about Davis, Gilbert clearly deserves a great deal of the responsibility for the failure of this play, as his coordinator, on this play, but him in a position to succeed and Newton helped him out by executing a tough assignment perfectly. As he gains more experience, there's little doubt that this is a throw that Gilbert will not only make consistently in the future, but also a throw that he made in the second half of the game as everything slowed down for him and Davis expanded the playbook.

As for Newton, it's common knowlege that he is excellent in such situations, but it's truly remarkable how well he understands his assignments in blitz pick up and then how consistently he executes those assignments. A player with good size, deceptive speed, and excellent vision, what makes Newton such a perfect fit for the offense is his ability to give the quarterback a chance to make teams pay for coming on blitzes. It's that ability that separates him from the rest of the running backs on the team and also what makes it so frustrating to see Davis go to the empty set and become so susceptible to blitzes or blitz looks.