Share All sharing options for: What Went Wrong, Part III: Losing the Edge

As the Texas offense sputtered on Garrett Gilbert's first seven drives -- the Longhorns picked up only one first down, on a 28-yard DJ Monroe jet sweep, going three and out on every other drive. The only exception to that trend was the shovel pass disaster, so horrific a play that I'm still debating if it can even be analyzed in this space without causing significant distress and mental anguish for the entire Longhorn fanbase. It just might not be safe, I'm saying.

But that didn't happen until the end of the first half. As the Texas defense spent most of the first half on the field, the middle held well with few exceptions, but the major breakdowns began occurring on the edge. After going three and out on their first offensive series and gaining 19 yards on the second, the Tide offense began to roll at the end of the first quarter, setting the stage for a dominate second quarter and helping sink Texas' hopes of a championship. So what exactly happened on the edge?

Alabama dials up a downhill, man-blocking running play -- power. The designated hole on this play is the 4 gap, between the left tackle and the left guard as the guard gets to the second level and blocks the playside linebacker, in this case Keenan Robinson. The Longhorns are playing with two deep safeties, so they do not have an advantage in the box, as Tennessee made sure to have on virtually every play -- it's 7-on-7 here for Texas, putting a premium on each player getting off their respective blocks and maintaining gap integrity. 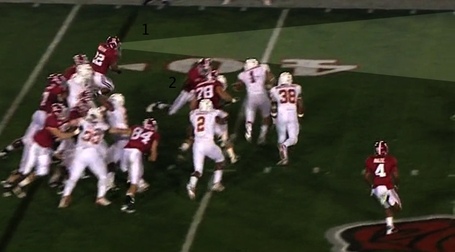 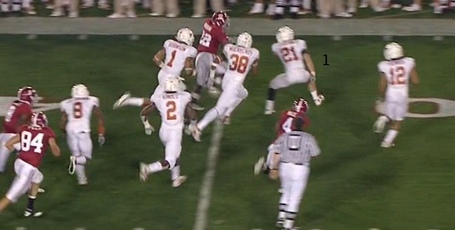 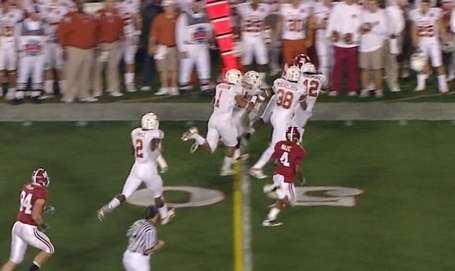 Gideon's ceding of the edge to Ingram results in another 5-7 yards for Ingram, making him the second Texas defender to give up the edge on this particular play. Ingram picks up 18 yards and takes the ball into Longhorn territory.

Losing the edge was an all-too-common them for Texas throughout much of the first half, keeping the defense on the field and allowing the Alabama offense to gash them for big gains. While the Tide did have some success running the ball up the middle, as they did on Trent Richardson's long touchdown run, most of the runs came as a result of the Texas cornerbacks losing their outside leverage and the linebackers failing to get off blocks and maintain their lanes.

The secondary also struggled in taking good angles and making tackles. Combined, members of the secondary accounted for 13 of the 20 or so missed tackles in the game and took seven bad angles -- that's a ton of extra yards in a close game. Blake Gideon, as seen on this play, was one of the main culprits with four missed tackles and four bad angles. One of the latter clearly came on this play.

Gideon has become quite a whipping boy over the last two years and the main reason is that while he may be football smart and understand his assignments and alignments, making a play when he gets there is a bigger problem. He made significant strides in catching passes that hit his hands, but continued to struggle with his major physical limitation -- an almost complete and total lack of lateral range and poor understanding of football geometry. It's probably a task for the offseason, but going back and charting all the poor angles taken by the Texas secondary would almost undoubtedly end in a significant lead for Gideon in that ignominious strategy.

Against a physical team like Alabama, winning in the trenches is extremely important and Texas managed that with dominant performances from Sergio Kindle and Lamarr Houston, but playing the weakside edge is of almost equal importance. Will Muschamp decided to keep two safeties deep for most of the game and it limited the Alabama passing game, eschewing the successful Tennessee strategy of outnumbering Alabama in the box by moving a safety up to the line of scrimmage or the strategy by Auburn of using three lilnebackers, even against three-wide sets from the Tide.

As a result, Aaron Williams stayed in the nickel for most of the game -- he played the edge much better and with more experience from dealing with blockers in the wide receiver screen game most of the season. Chykie Brown was just not quite up to the effort and occasionally abandoned his assignment, leaving the Alabama running backs running free into the secondary too often, where tacklers like Blake Gideon struggled to bring down the terrific talented tandem of Ingram and Richardson.