Down 15-10 beginning the fourth quarter in a tightly-contested ballgame, Alabama got within two yards of scoring the go-ahead touchdown, but were stopped on third down after a big substitution infraction moved them back to the seven. The subsequent field goal closed the gap to two points.

Despite picking up nine yards combined on first and second down with two plays to Russell Shepard, LSU was unable to pick up the needed yardage for the first when Alabama stopped Stevan Ridley for no gain after an LSU timeout. It was the first possession of the game for LSU after losing starting tailback Charles Scott to a broken collarbone. It didn't help the offense either that pick-six machine Jarrett Lee was also in the game after Alabama roughed up Jordan Jefferson, out after twisting his ankle and taking a vicious hit from an Alabama defensive tackle leading with his helmet in Jefferson's chest, a play that should have drawn a flag but did not.

In addition, the defense also suffered some costly attrition. In and out throughout the course of the game with cramps, LSU cornerback Patrick Patterson, who would later have his clear interception of Greg McElroy ruled out of bounds, left the game on Alabama's previous drive with another injury and did not step onto the field for a crucial play. 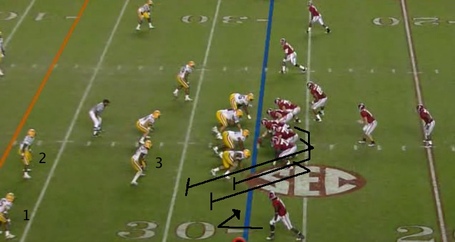 This is a screen pass to Julio Jones at the split end position, utilizing the left tackle, left guard, and center to get out in the open field and block for him. It's a relatively unusual play because most screen passes to wide receivers go to the wide side of the field where there are more defenders to block. Therefore, it makes tremendous sense to run the play to the split end because there are fewer defenders to deal with, as illustrated above -- there are only three LSU defenders on the weak side of the field, the Will linebacker, the cornerback replacing Patterson, playing about seven yards off the line of scrimmage, and the safety playing outside the hash. The Alabama offensive line will essentially be one-on-one in the open field on this play and the cornerback is so far off the ball that it will be difficult to close before the left tackle gets in front of him. 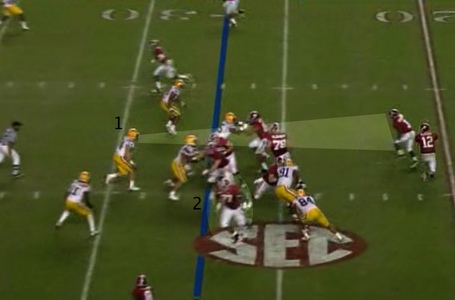 In a bit of a new feature with Snap Shots, I've labeled the important aspects of the play 1 and 2 for ease of understanding: 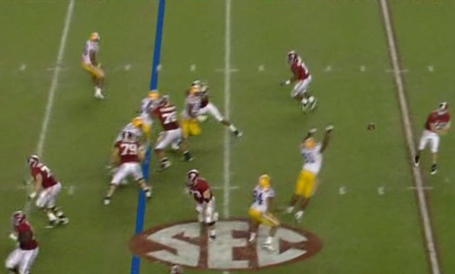 The center and the guard now follow the left tackle, while McElroy delivers the ball to Jones on the outside. The two defensive linemen on that side of the field have taken themselves out of the play, though no. 84 gives good effort and never quits on the play. So there's that at least. 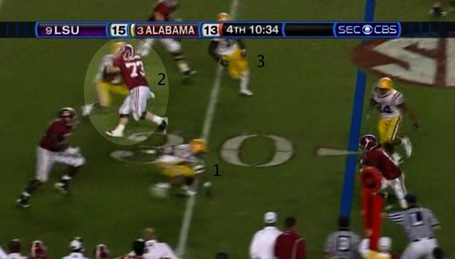 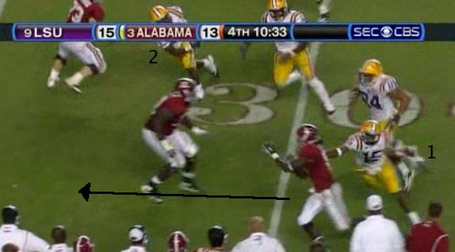 Now it's off to the races for the speedy receiver, who was only barely touched by one defender.

There aren't many catches were a touchdown is obviously imminent 50 yards from the end zone, but that is obvisouly the case here, as the excited 'Bama sideline illustrates. And despite being such a big receiver -- listed at 6-4, 211 pounds -- Jones has impressive speed in the open field, running away from the LSU defense.

Jones is an impressive physical specimen, similar to Malcolm and Roy Williams with his rare combination of size and speed. Though his numbers dropped fairly significantly from his monster freshman season -- 16 fewer catches and 350 fewer yards -- this play illustrates just how dangerous he is, particularly in the Alabama screen game and on this particularly play, which the Longhorns are likely to see at least once next week.

Besides the physical skills of Jones, the play is extremely dangerous because of the pure numbers. Just like LSU, the Longhorns will only have three players on the weak side of the field for this play, with the possibility that the safety will be playing the deep middle instead of outside the hatch and be Blake Gideon, a player known for taking bad angles. That means that the Longhorns will end up being one-on-one against the Alabama linemen, with at least one player needing to beat the open-field block and make a play. However, as this play demonstrates, the simple presence of the linemen can force bad angles and eventually lead to the same result -- no one having a chance to tackle Jones.

The success of this wide receiver screens brings up the important question of how Will Muschamp will choose to play Jones. Alabama runs a great deal of 11 personnel with three receivers on the field. Does Muschamp play nickel against this defense, with Aaron Williams playing nickel back? Or does Muschamp choose to use an extra player in the box as Tennessee did and largely ignore the slot receiver at times, just putting a safety deep over the top in coverage against that receiver?

Of all the cornerbacks, Williams has the size and strength to deal with Jones, while both of the Browns, particularly Curtis, have struggled against bigger receivers this season. Witness the success of Jeff Fuller and Dezmon Briscoe. So putting Curtis Brown on Jones seems out of the picture, but Chykie struggles so much with his concentration that either one looks like a good match up for Alabama.

Ultimately, how Texas ends up defending Jones will dicatate the defensive personnel throughout the rest of the defense -- if Aaron Williams is playing Jones, then that means the Longhorns are probably playing with three linebackers and Earl Thomas is playing some nickel back, a position for which he has not expressed a great deal of love in the past. The bottom line, though, is that if the Longhorns don't do a better job of defending this play, Jones could end with a another, even bigger, game-changing touchdown on the split end screen.