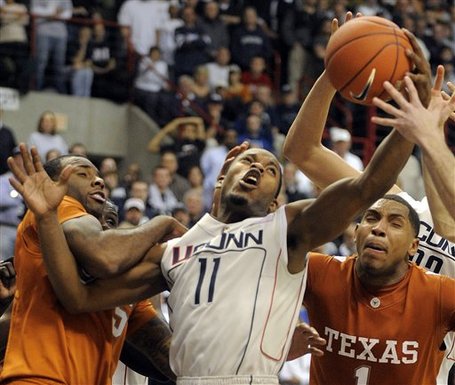 The Huskies handed Texas their second loss of the season.

"It's tough," Longhorn forward Damion James said. "I'd be lying if I said it's not. We feel like we are one of the best teams in the country."

At least there was something good in Storrs.

Given the choice of accepting a road loss in order to see former Big East commissioner Dave Gavitt on Saturday, Texas coach Rick Barnes said he would take the loss.

Gavitt, who has been ailing the past few years after multiple bypass surgery and other health issues, made a rare public appearance at the Texas-Connecticut game.

"I don't think he just flipped a switch during games," Barnes said. "I think the biggest thing is his effort in practice and his consistency in practice. Gary has always spent time in the gym, even on days we take off. But the biggest turn was when he started competing more over the last three weeks or so."

Rick Barnes has a great outlook on coaching.

"I used to think this job was the end of all things," he said this week. "I've learned this job is not who I am, it's what I do. As I've gotten older, I don't worry. I don't consume myself with winning. I consume myself with getting these guys better and keeping our program going."

Texas: Rick Barnes (Lenoir-Rhyne)
Rick Barnes’ career at Lenoir-Rhyne can be summed up in two words: nothing special. He averaged less than three points a game and never shot better than 40 percent. According to a friend on the team: "He was good, but it didn’t translate to games."

A judge wants Mike Leach and Texas Tech to settle.

Mike Leach's lawsuit against Texas Tech may not get to trial after all.  The judge in the case ordered the sides to settle the case by mediation. The ruling comes one day after William Sowder said the case could proceed but did not grant Leach's request for a speedy process.

The Batt has some advice for the Aggies' new defensive coordinator.

Allow me to offer a few bits of advice to help you understand and adjust to your new surroundings. Purchase a maroon sports coat. They're awfully sharp looking and go with just about anything. Go visit The Chicken. Play a little pool. Take a stroll through the Quad. "Whoop" to your heart's content.

And please ignore the campus-wide construction project we've got going because the wreckage at the Memorial Student Center doesn't hold a candle to the major renovation needed by the Texas A&M defense you have inherited.

I Am The 12th Man has videos to explain the 3-4 Defense to the Aggie faithful.

In the span of one week, Oklahoma State’s offense has gone from having head coach Mike Gundy calling the plays to striving to have the Cowboys’ starting quarterback calling them.

New offensive coordinator Dana Holgorsen — who was hired one week ago today — is poised to install his explosive, pass-heavy offense, and he’s bringing along former Texas Tech quarterback Graham Harrell to help tutor the Cowboy quarterbacks.

You really wanted to know... Where in the world is Tim Tebow?

Former Aggie Jack Pardee wants a phone call. From anyone.

And yet, when Jack Pardee is asked whether he would ever consider coaching football again, he stops. He doesn't murmur or mutter, sputter or stumble. He merely stops and thinks. And thinks. And thinks. And thinks. "You know," he says -- followed by another lengthy delay. "I'm 73-years old, and there's an age factor. Schools won't say that's the reason for not calling, but I have to be realistic. I'm not on anyone's radar."

"Sure," he says. "If the situation were right, I suppose I would."

SI's Andy Staples has some fun with Urban Meyer's on-again-off-again semi-leave of absence.

Vol fans want to have a permanent reminder of Lane Kiffin in Knoxville.