Share All sharing options for: Jordan Hicks to Texas 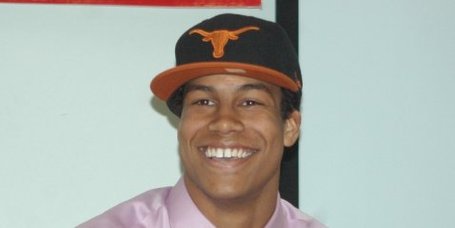 [2:05 pm Update]: Commitment video. Coach Larry Cox has a spectacular, all-business flattop. High and tight. He starts by complimenting the way that Hicks has handled the process -- for which he also deserves great, great credit -- and then listing off Hicks' honors from his senior season. Summary -- he's everyone's All-American. Cox then calls Hicks "possibly and arguably the most decorated football player in the history of Ohio football." Wow. -- GoBR --

Longhorn fans are greedy. They always want more. More. More. It's an insatiable lust for good news, with mammoth meltdowns always lurking just around the corner. But that will be for another day. A lesser day. On this day, January 29th, 2010, the Texas Longhorns received two commitments from five-star studs -- first Jackson Jeffcoat, now Jordan Hicks. This is obviously not a lesser day. No, this is the best of days. The future of football at Texas is so bright it's blinding.

Florida began to fall by the wayside when Charlie Strong left for Louisville, but the death blow probably came when Urban Meyer didn't visit. It's hard to say what exactly happened with Ohio State, but the weather, his mother's relationship with Jeff Madden, Jordan's relationship with Will Muschamp, and his overall lack of ties to the state of Ohio helped eventually eliminate the Buckeyes from contention when Hicks sat down to make his final decision.

Even picking up Jackson Jeffcoat was an incredible get for the Longhorns to help top off an amazing recruiting class in its own right, but adding Hicks to it as well is almost unfathomable -- it will probably take some time to process everything and put it all into proper perspective, but even Bill Walton might have trouble making hyperbolic statements. The class is just that good and that the announcements of both Hicks and Jeffcoat both came within 90 minutes of each other and both favored the Longhorns is just staggering. It's a bit of a conspiracy theory, but what are the chances that the two communicated about their decisions and decided to announce so close together as a show of solidarity for the Longhorns? That such a thing is even thinkable is almost beyond words.

Maybe it was just completely serendipitous -- both players just came to the same decision at the same time and wanted to end the process as quickly as possible before Signing Day. After all, Jeffcoat was expected to announce on Sunday night, but moved his press conference up two days.

Now, the next question is which recruit is the crown jewel of this class -- Hicks or Jeffcoat? But wait, Reggie Wilson, Tevin Jackson, Mike Davis, and Darius White all have strong claims to that title as well. Hell, why even debate something like that? They are all the crown jewels of the class. The class is the crown jewel.

And by the way, Jordan Hicks looks amazing in burnt orange. More later, of course, on the implications.

Hicks is a stud. Just about everything that Coach Boom could want from a linebacker, Hicks brings to the table. Toughness. Smarts. Speed. Striking ability. The ability to read and diagnose, then make the play when he gets there. Drop into coverage. Come on now, there's a reason that he's widely considered the best linebacker in the class. At this point, there's not much more to say than that.

Maybe the Rivals guys can help out ($):

"Hicks is a very explosive athlete that excels as a pass rusher and a pass defender. He will need to add some size and strength, but you can't teach aggressiveness and he has that and this should make him a difference maker at the next level." -- Barry Every

"Jordan is a long, lean linebacker that has great body structure. I think by the time he's through his freshman year, he'll be able to play at 235 pounds and still keep his ability to get to the football. It's a solid group of linebackers this year, but nobody has the pass-rushing skills that Hicks does. He is incredible coming off the edge and he's angry when he gets there.

"I think he's the type of kid that comes in and at least sees action on special teams as a freshman. Just imagine what he'd be like running down on the kickoff or punt coverage teams. He'd be a terror. He's also got the ability to come into the rotation in third-down situations when he can rush the passer or use his speed and athleticism in coverage." -- Jeremy Crabtree