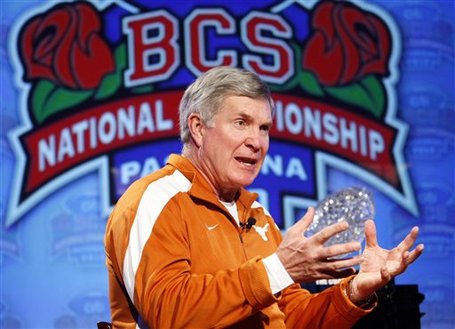 Mack Brown and Nick Saban have something in common.

One brings the thunder. The other brings the coffee if you've got an early-morning appointment.

One has Belichick on speed dial. The other could have Matthew McConaughey as one of his Fave Fives.

One is a detail freak. The other is the ultimate coaching CEO.

It seems like the only thing they have in common are dollar signs -- lots of them. Two of the highest-paid coaches in the country earn a combined $9 million per year. (Saban is No. 3 at an average of $4 million per year; Brown No. 1 at $5 million.)

The Horns arrived in Pasadena and Mack had some words for everyone.

Seconds before Hunter Lawrence propelled Texas into the BCS title game with one, swift thrust of the leg, the kicker watched his teammates shove an uninvited guest out of the Longhorns’ huddle.

Suh laughed when recalling the encounter a few weeks later.

Mack Brown was recruited by Bear Bryant at Alabama.

"Here's a 17-year-old sitting in Coach Bryant's office," Brown said, "and boy am I feeling good about myself."

If mom and dad had agreed, Brown might have committed to Alabama on the spot.

Thursday's game is a showdown between the spread vs. the run.

Texas-Alabama may also provide college football a referendum on offenses.

Is the spread, which the Big 12 has ridden to national prominence, still the way to go?

Or is the path to a national title by way of the run these days?

Bevo goes on a road trip.

Bevo XIV, after an unruly beginning in the early morning chill, is on his way west to the national championship game in Pasadena, Calif. The orange-and-white symbol of all things Longhorn and his four Silver Spurs handlers today at 8:25 a.m. left the ranch northwest of Austin that Bevo calls home.

The Rose Bowl is rolling out the red carpet for the Horns and the Crimson Tide.

Alabama and Texas will have a brand new natural surface on which to play Thursday's BCS national championship game.

Moments after yesterday's Rose Bowl between Ohio State and Oregon, crews scalped the existing field and worked all night and through the next to roll out and prepare new Bermuda grass sod in time for Thursday night.

Barking Carnival has Texas vs. Alabama: A Historical Perspective.

For Longhorn fans the history is short but sweet: Texas holds an all time record of 7-0-1 against Alabama. It’s been 28 years since the Horns and the Crimson Tide played, and of course they will renew their infrequent rivalry in the BCS Championship game next Thursday.

These two preeminent college football programs have played only three times in the last 45 years, but if those games are any indication, Thursday’s contest will be a fierce, physical one that won’t be decided until the very end. 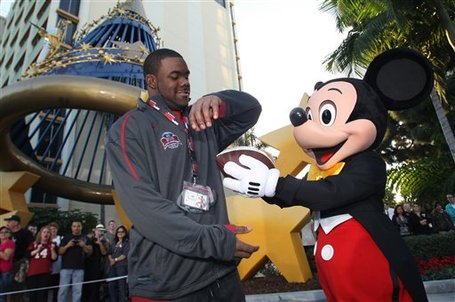 How sweet...Mark Ingram got to go to Disney World and meet Mickey.

Deaderick was wounded in three different locations as he aborted a robbery attempt in a Northport apartment complex early that Monday morning, just five days before the Tide's season opener with Virginia Tech. He was taken to DCH Regional Medical Center in Tuscaloosa and kept overnight. He checked out the following afternoon and returned to the Tide's football practice as an observer, intent on returning to the field."Three bullet holes -- in my arm, my tricep and my hip -- but this is a tough man's sport," he said. "I was well enough I could play. It might not have been up to the capabilities that I wanted, but I felt that I wouldn't hurt the team, I felt that I could help the team."

Tide seniors started their career with firing of Mike Shula and it will end in the title game.

If Alabama can pull off a victory over No. 2 Texas next Friday in Pasadena, Calif., with a national title on the line, Reamer & Co. will have no problem naming a high point to their college careers.

They have endured the firing of coach Mike Shula, celebrated the hiring of Nick Saban and helped revive a program that seems to have once again become a regular in the Southeastern Conference and national title conversation for the foreseeable future. 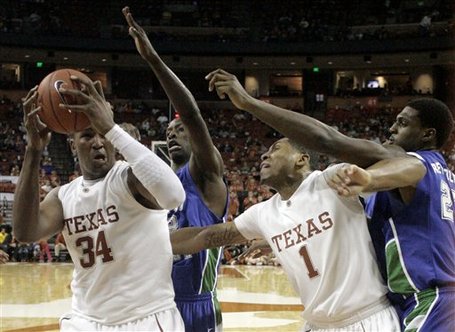 It wasn't pretty, but it was a win.

If not for 25 turnovers, the Islanders (5-7) may have may have had a chance to pull off the upset.

Insight Bowl: Iowa State 14, Minnesota 13. Congrats to the Cyclones and their first winning season since 2005.

The Mike Leach saga takes some ugly turns. In an interview, Mike Leach used a trainer and the team physician to back up his story, but the affidavits do not confirm Leach's statements.

In an affidavit obtained Saturday by The Associated Press, Texas Tech head athletic trainer Steve Pincock says he told James he was "sorry" for having placed the player inside an equipment shed near the practice field.

On Dec. 21, Pincock spoke with Tech officials, telling them that he did not agree with that "form of treatment for anyone" and that Leach "wanted James to be uncomfortable."

In an interview a day later, team physician Dr. Michael Phy told university officials that James "may not have been harmed" but he "considered this practice inappropriate."

The Dallas Morning News has all the gory details.

Dr. Saturday has the ending of Leach's love fest in Lubbock.

For two days after the story broke Monday afternoon, Leach's only major public critic -- by default -- was Adam James' father, ex-SMU star and ESPN analyst Craig James, who filed the initially complaint to the university. And even he didn't mention Leach by name in his comments on the incident Tuesday night.

Today, though, the Leach lovefest emphatically ended, in the most unlikely place: From his own team. When the media ban was lifted on current Raider players during their Alamo Bowl preparations in San Antonio, a few team spokesmen opened up with both barrels.

Art Briles is not interested in living in Lubbock. He likes Waco.

With his name being mentioned as a leading candidate for the head-coaching job at Texas Tech, Art Briles said Friday he remains committed to the Baylor football program.

"I am proud to be a Baylor Bear and remain committed to making this program a source of pride for the Baylor family," the second-year coach said in a statement. "I feel good about the direction of our program and the foundation that has been built for future success."

Darius White is not going to be a Land Thief.

Darius White has just committed to Texas.  Not sure how that happens when he was quoted as saying playing time was his most important factor in his decision... I just hope he enjoys losing to OU next year and having to wonder what could of been.

Please pause a moment today to mourn the passing of sports.

We might as well just cancel the game in Pasadena because sports died on Wednesday.

Sports died unexpectedly Wednesday from an apparent suicide, when one of the last bastions of integrity in college football decided that contract price and opportunism were more important than graduation rates and success. Sports was as old as human history.

"I'm really disappointed," said God, fighting back tears, "I went to a whole lot of trouble to provide a meaningful escape that also afforded you all an opportunity to learn about virtue, and now you've gone and screwed it up. Jesus Christ bananas, I'm out." College football was unavailable for comment, because it has nothing to say for itself.