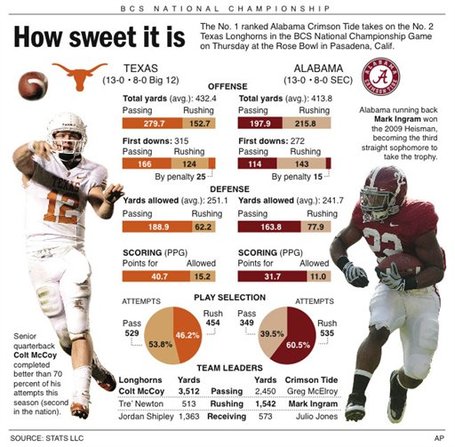 Really? We hadn't noticed. From the brilliant mind of Dennis Dodd: Colt McCoy is not Vince Young.

The only thing Colt McCoy hasn't done for Texas is heal the sick and raise the dead. And there are probably affidavits somewhere attesting to those feats.

But for his last trick, Texas' quarterback has to become Vince Young. Not in the DNA sense, but in the Halloween sense. Mimic the Longhorns' greatest quarterback in the BCS championship game and McCoy steals that title from V.Y.

"We won the game," McCoy says with a shrug.

Yet, deep down, it's likely McCoy still winces when he dwells too much on Texas' anemic offensive performance in beating Nebraska 13-12 in the Big 12 Conference championship.

And he certainly doesn't want his unit to be defined by what transpired at Cowboys Stadium against the Huskers when, statistically, Texas suffered through its worst game in nine years.

Greg Davis explained the complexities of pass protection to some sports writers. It didn't seem to go well.

By the time Texas offensive coordinator Greg Davis finished explaining the complexities of pass protection Sunday morning, it seemed to fall somewhere between splitting an atom and carrying on a conversation with a teenage daughter.

His bottom line may be that no sportswriter can understand it all. He might be right about that. Besides, Texas has averaged 41 points a game this season, and Colt McCoy has completed 70.5 percent of his throws.

Texas is also 13-0 and playing for the national championship. If Texas is broken, a lot of other teams would love to be broken.

One sports writer thinks Mack Brown and Nick Saban have a lot in common.

Imagine if Nick Saban had a folksy alter-ego, born and bred in the hills of rural Tennessee rather than the rugged mountains of West Virginia.

Imagine a less intense version of Saban, the University of Alabama’s head coach, but just as driven to win.

Try to picture Saban with an acquired down-home Texas manner instead of an all-business, no-time-for-small-talk demeanor.

Another writer doesn't think the two coaches are anything alike.

You couldn't ask for two more diametrically opposite coaches on the sidelines Thursday night. Each has been wildly successful -- both have won BCS championships, both have won 25 games over the past two seasons -- but achieved that success with drastically different approaches.

Most of Texas loves Mack Brown.

For the last 12 seasons, the eyes of Texas have been upon Mack Brown. And for nearly every minute, those eyes have smiled -- except in places such as Lubbock and College Station.

Brown is the leader of the legions of people who dress in orange, who place forefinger and pinkie in the air so they can "Hook 'Em Horns" and who will be at the Rose Bowl on Thursday night in full throat and faith for the Bowl Championship Series title game against Alabama.

“Haven’t we beaten them the last two years?”

A possible linebacker in our future?

For someone as Winnebago-wide and fearsome and scary as Alabama nose guard Terrence Cody, his most impressive numbers are height (6 feet 5) and weight (365 pounds, according to the team's website) over tackles (25) and sacks (zero).

Cody is actually down from 410 pounds. During a high school game in Fort Myers, Fla., he once landed on tailback Noel Devine, now a star at West Virginia, prompting Devine to vomit.

Alabama coach Nick Saban has had several weeks now to diffuse what he’s termed the "David vs. Goliath" buildup to the Citi BCS National Championship Game.

Clearly, Saban has no desire for the Crimson Tide to play the role of David, and neither do the players.

With the work ethic and the success came confidence, which is why McElroy knew he could succeed at Alabama. He was so confident that after last season ended, he walked into Nick Saban's office to let the Alabama head coach know he didn't need to worry about the quarterback position, because McElroy was going to take over.

"He just wanted Saban to know that he had the confidence and the maturity to lead the team," McElroy's father said.

A Tide Sports blogger has some observations about the big game and the big city.

Alabama and Texas football players got their first taste of how the Left Coast rocks today when the teams were bused to Disney for a combination media event and player outing. Head coaches Nick Saban and Mack Brown did a press conference at ESPNZone in Downtown Disney hosted by Jesse Palmer (who, to his credit, did not mention Tim Tebow even once).

Saw Colt McCoy in person for the first time today. He doesn’t make an overwhelming impression. In fact, he is about the same height and build as Alabama’s quarterback, Greg McElroy. You can’t judge a racehorse by eyeballing him (well, Jed Clampett could, but I can’t), and all evidence says McCoy plays bigger than he looks walking around.

The soap opera in Lubbock

The Wall Street Journal hashes out the whole sordid contract dispute between Leach and Gerald Meyers.

Two days after Texas Tech's stunning decision to fire head football coach Mike Leach, three current and former members of the school's board of regents said the firing was largely the result of ill will left over from a heated contract negotiation early last year.

"I don't want to say anything bad about the fans, but this is not the first situation that something like this has happened [with Leach]. This is just the first time someone stepped forward," Carter said. "I don't want fans thinking that Adam James did this because he was upset but it was just kind of the last straw, and sooner or later something was going to come out. This is the first situation that someone spoke up about.

"We always thought that Mike Leach was a great coach, and he always has been. This year, I don't know if it was personal issues or what not, but things just kind of turned for the worst and it just became a big distraction this year for us. And I think that's one reason we were so up and down this year, because some of the things that he said to his players and some of the things that were done. People just didn't cope with that."

Everyone is just ready to move on.

There is a new political action committee.

The spot, which will air in Boise, Dallas-Fort Worth and Salt Lake City this week, focuses on the fact that some NCAA Division I teams that had undefeated seasons do not get to compete for the national championship.

The conversation continues about the impact of head injuries in football.

The rise in reports of dementia in former players, possibly stemming from brain concussions, caused the House Judiciary Committee to hold a second hearing on Monday, this time in Detroit, during a recess of Congress.

Representative John Conyers Jr., Democrat of Michigan, and the chairman of the committee, was right to cast his eye beyond the N.F.L. and, in printed remarks, call for a change in the culture of college football (and by projection high school and youth football).

Disability and early death suffered by former N.F.L. players, as reported in a recent series of articles by Alan Schwarz of The New York Times, can start at an early age.

The NCAA is considering a rule change to allow officials to remove players who may have suffered a concussion.

Football is not a democracy.

At best, it's a kind of friendly fascism, an even-handed, one-vote dictatorship ruled by a benevolent despot we call a football coach. At its worst, football is lockdown authoritarianism, an airless, repressive, nickel-and-dime gulag of macho posturing, psychological cruelty, preening violence and thoughtless tyranny run by a tin-pot generalissimo with a whistle and a clipboard. And as many parents know, this can be just as true in grade school as it is in the NFL.

Admission standards are bent for athletes.

If grades make you a long shot for college, you're much more likely to get a break if you can play ball.

An Associated Press review of admissions data submitted to the NCAA by most of the 120 schools in college football's top tier shows that athletes enjoy strikingly better odds of having admission requirements bent on their behalf.