It was clear from the start of the game that Gus Malzahn was going to empty the playbook against Alabama, breaking out the reverses, wide receiver passes, Wildcat throwbacks to Chris Todd and subsequent attempts downfield, and any other plays he thought might misdirect, confuse, or otherwise take advantage of the strong Alabama defense. In the early going, it worked, helping Auburn take a shocking 14-0 lead before the Tide offense got rolling for the first time and put a touchdown on the board.

As the Tide offense began to move the football, the Alabama defense stiffened, forcing three and outs on Auburn's first two possessions in the second quarter, winning the field position battle in the process. Midway through the quarter, after the second three and out by the Tigers, an 11-yard return from Javier Arenas gives the Alabama offense the ball at the Auburn 45 yardline. 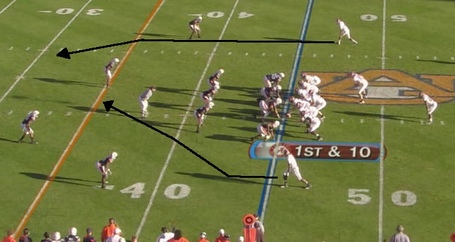 Alabama lines up in 12 personnel, with an H-back in motion across the formation from left to right and a tight end on the line of scrimmage. The two players to watch here are Julio Jones to the bottom of the screen (weak side) and Marquis Maze to the top (strong side). Auburn is playing with a 4-3 look and what appears to be zone coverage in the secondary, possibly with some man-to-man principles. Jones will run a deep crossing route, threatening the safety in between the hashes, while Maze runs a deep post route, threatening the same safety. 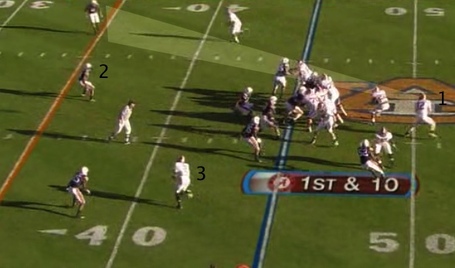 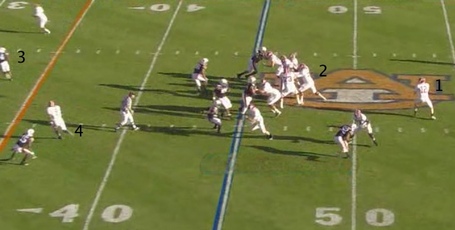 As he does throughout the play, the cornerback has deep position on Maze and a chance to make a play on the football. It's slightly out of his reach and hes bobbles it once... 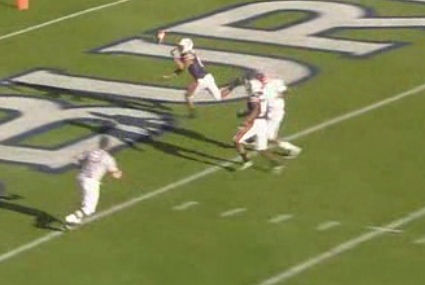 And again, failing to secure it before he steps out of bounds in the back of the end zone.

The Stats of the Day post looked at McElroy's passing numbers from the season, noting the strong start and finish to McElroy's season, with an inconsistent, inaccurate middle. Though this particular poor throw is from the Auburn game , the final contest for Alabama before the annihilation of Florida and part of his strong finish, it illustrates several important points about McElroy: 1) he has a tendency to stare down his first read, resulting in a failure to check down or go through his progression to find open receivers, and 2) when he does see open receivers, he sometimes is so afraid of throwing an interception that he doesn't give his receiver a play on the football.

Had McElroy gone to his second read -- Julio Jones -- he would have seen his receiver streaking across the middle of the field wide open, uncovered by anyone in the secondary. It's important to note here that had McElroy shifted his eyes to Jones just before the safety between the hashes bails out into coverage in the second frame above, Jones may end up being covered, but that seems unlikely. It's a virtual certainty that had he targeted Jones, it would have resulted in a big play.

McElroy's tendency to stare down receivers brings up another point -- he does not do a good job of manipulating defensive backs with his eyes. Where he looks is where he wants to go to the football and he will wait for that receiver to come open. He will rarely move a defender, then throw the ball to a receiver entering the vacated area. As a defense, taking away his first read becomes the main priority.

On this play, had McElroy tried to fit the ball perfectly into Maze, it probably would have been intercepted. Instead, he overthrows it a bit and though the only player who has a chance at the ball is the cornerback -- McElroy's cautiousness pays off and helps avoid a turnover. There were several other big plays in the other two games I watched where the 'Bama quarterback cost his team touchdowns by missing open receivers -- once early against LSU when he missed a wide open Jones in the end zone for an easy touchdown. Jones had no play on the ball. Early in the same game, he missed Marquis Maze going deep on a double move, throwing the ball long and out of bounds. Maze had no play on the ball. On a trick play out of the Wildcat, McElroy had a a wide-open H-back down the seam, but overthrew the ball.

Once again, for whatever reason, McElroy is extremely cautious and works hard not to turn over the football. But as a result, he often makes it difficult for his own receivers to make a catch, often failing to even give them a chance. This mindset is reflected in his low number of touchdown passes at times and also his low number of interceptions and could even have had an impact on the Tide settling for so many field goals during the stretch where McElroy struggled.

Though Alabama does not throw deep extremely often, they do like to take some shots downfield, mostly off of play action. Whether or no the Texas defensive backs can stay with the Alabama receivers on those routes and whether or not McElroy can give his receivers a chance to catch the ball may be the difference in Alabama scoring a touchdown at a critical point in the game, settling for a field goal, or punting. The former Southlake Carroll star is not likely to throw an interception in such a moment, but there's also a strong chance no one will have an opportunity to catch it.