To the Tide fans who have been frequenting these parts recently -- we've definitely appreciated having everyone hanging out over here at BON and, even more so, appreciated the high level of discourse.

It is with the utmost respect, then, that I ask my new Crimson-clad friends in attendance to consider covering your collective eyes -- this stat is ugly.

Yikes. That's train wreck territory. The beauty of this statistic for Longhorn fans is that the timing of it -- McElroy had just missed an easy touchdown pass to Julio Jones with this same concept, except to the other side of the field, as Alabama snapped the ball on the left hash: 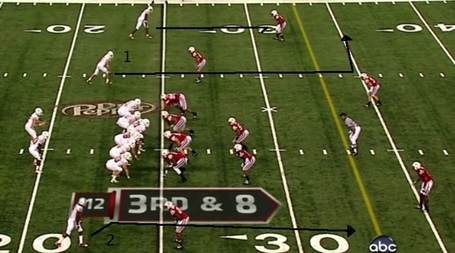 Here's the shot of the ball sailing wide of Jones' outstretched hands: 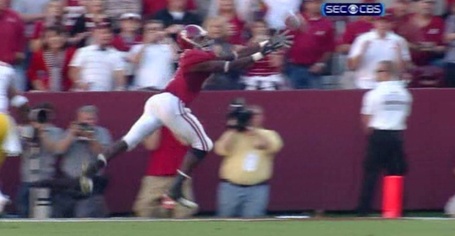 A major takeaway from the Snap Shot of McElroy yesterday was that McElroy is too careful with his throws much of the time, worrying too much about having a throw intercepted. On this play, Jones was completely wide open and all McElroy had to do was just give him a chance to make the catch. While the play was indicative of McElroy's struggles in general in the red zone, it was also indicative of his problems connecting with Jones inside the 20 -- Gary Danielson mentioned during the broadcast that the play above represented the 13th time that McElroy had targeted Jones in the red zone to that point in the season and each one had them had fallen incomplete.

The Alabama defense is extremely difficult to score upon in the red zone, but the offense is has trouble scoring touchdowns. An overall ranking of 33rd in red zone conversions is respectable at more than 85% but that's expected with a kicker of Leigh Tiffin's quality. The problem is putting the ball into the end zone -- Alabama ranks 111th in the country at just over 45%. Alabama gets there just over four times per game and averages about two touchdowns on those four trips. By contrast, the Texas defense allows touchdowns on 50% of the drives the enter the red zone, good for 28th in the country, and allowing less than three drives per game.

Of course, the statistic from the above screen shot originated during the period of Alabama's monumental red zone struggles and at the end of McElroy's mid-season slump, so that specific statistic probably improved slightly, but Alabama only converted at the seasonal percentage during the strong November stretch that saw the Tide score more touchdowns overall. During the poor stretch in October, the touchdown percentage had dropped to barely over 25% -- one in four.

The statistics suggest that Alabama will score at least one touchdown on three trips to the red zone, but the balance of the game may hang on whether or not the Tide can penetrate deep into Texas territory a fourth time and come away with a touchdown on that drive. If McElroy only manages to complete roughly one out of four passes on those four trips, then Alabama may be hard pressed to even come away with a single touchdown. Will McElroy give his receivers a chance to catch the football in the red zone in the Rose Bowl?